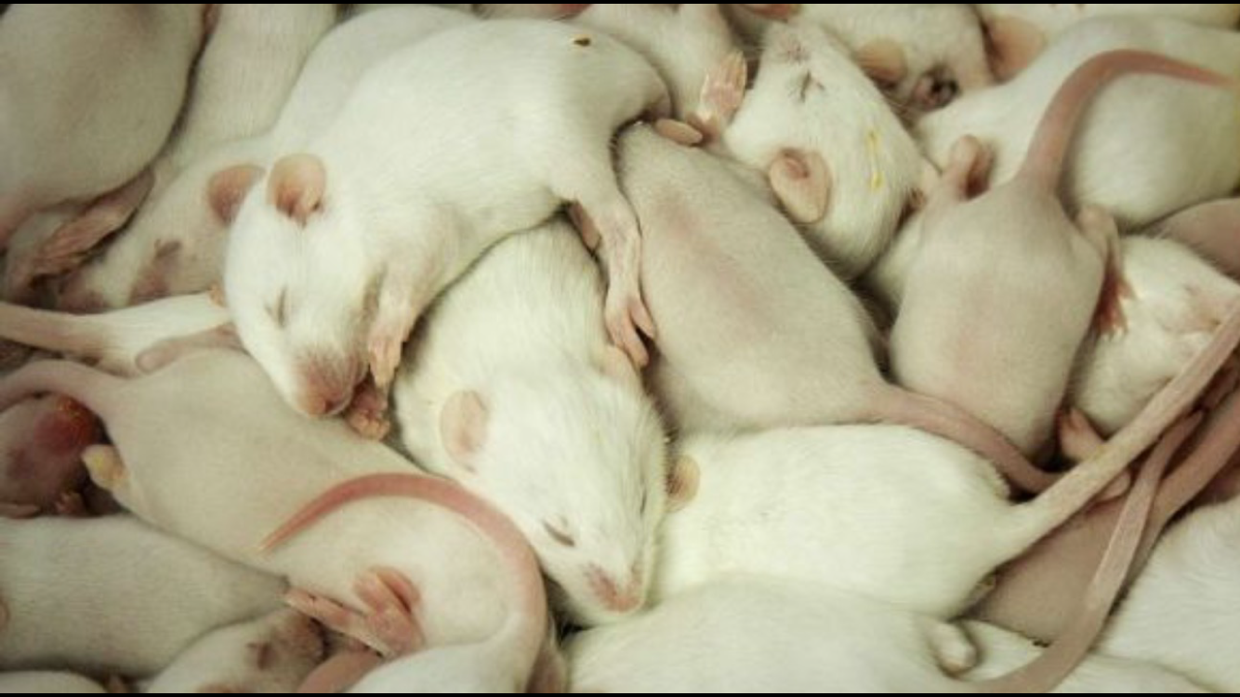 An ethnographic and sociological nonfiction horror film, Theo Anthony’s Rat Film is a free-form experience with topical relevance. Long burdened by a documented history of residential segregation, Baltimore, Maryland —  Anthony’s current place of residence — has served as a recent political hotbed due to the unjustified death of African-American resident Freddie Gray while in police custody. Less than a month after a court ruling declared (in the midst of the strengthening Black Lives Matter movement) all tried police officers not guilty of any wrongdoing in the Gray homicide, Anthony’s challenging film debuted in Switzerland at the Locarno Film Festival to much praise.

Using Baltimore’s prominent rat infestation as a passageway into exploring the long-lasting mistreatment of the city’s African-American community, Rat Film is a story about a city’s obsession (through fascination and disgust) with the vermin that flood the urban streets; even the city trash cans are designed with the limited height a rat can jump in mind. “It ain’t never been a rat problem in Baltimore,” a local city exterminator clarifies, “it’s always been a people problem. And that ain’t gonna change until you educate the people.”

A visual dissertation with anthropomorphic tinges, Rat Film incorporates a narration that paints a timeless account of unjust history. Post-premiere, Anthony spoke with me about his intense research and how he drew on controversial scientists of the past to allude to a historical synergy between present day Baltimore and the city of decades past.

Filmmaker: I often start interviews by asking what lead the filmmaker to their current project. In this case, however, I feel it’s important to learn more about your upbringing and life in Baltimore and how you grew into being a photographer and journalist.

Anthony: I grew up forty minutes south of Baltimore in Annapolis, Maryland. As a teenager, Baltimore was the place I’d come to check out all the cool shows. It was the first time that I had ever felt a part of an art scene that was totally unique to, and in conversation with, the city it inhabited. I still feel that way, more than any place I’ve ever been. Out of college I moved to the Democratic Republic of Congo on a project and began working as a freelance journalist. I moved to Baltimore when I came back, and I got started with rats not too long after.

Filmmaker: In your profile for Filmmaker‘s 25 New Faces of Independent Film, you mentioned that you’ve “felt very uncomfortable doing journalism work — there’s a lot of pressure to tell an objective story, but I think that’s a myth.” I was interested if you could go further with that statement. Rat Film is certainly a movie that has a message and political point-of-view, but it emphasizes factual statistics about the deteriorating results of today. It’s a much more effective piece of journalism than most mainstream coverage currently out there.

Anthony: As a filmmaker, I’m an active part of a system that extracts, commodifies and injects reality into a market whose interests are largely divergent from the subjects that are being represented. That’s not to say that important work can’t be made within that system, but in general, I think there’s a huge blindspot in storytelling that refuses to acknowledge the body of the person behind the camera and their collusion with that process. Rather than treat that tension as an obstacle, I see it as really interesting terrain to navigate within a film, one that leads to more complex and challenging work.

Filmmaker: Had you been familiar with the infamous Johns Hopkins professor Curt Richter before starting this project? Your film implies that his studies loom high over modern-day Baltimore.

Anthony: As the father of modern rat poison, Curt Richter was a name that came up very early on in my research. But I don’t think the specifics of Richter’s work are very well known outside of certain scientific circles. What he represents — the elite pursuit of social improvement at any cost — is something that is a tragic and omnipresent force throughout history. There are many Curt Richters.

Filmmaker: In what way do you feel John Calhoun’s finding of the behavioral sink, described on Wikipedia as “the collapse in behavior which results from overcrowding,” currently applies to Baltimore’s residents? Is it something deeper than urban areas facing overcrowded living environments?

Anthony: Calhoun, like Richter, is a character that deserves his own film. There are so many nuances and implications for his work, as well as glaring blindspots, that I would have loved to dive deeper into. It’s really easy and tempting to sensationalize Dr. Calhoun’s work and then translate it to humans. But it’s more complicated than that. Yes, when you place people in a crowded environment unfit for basic needs, human populations can exhibit some nightmarish characteristics that are also seen in rat populations. But who gets to put those people in that environment? Who dictates the rules of that environment? How can the environment be improved to better serve the people? Those are the relevant political questions I see in Calhoun’s work.

Filmmaker: How did you find your characters? Given that you shot the film yourself, did you take to the streets every night to develop relationships? Everyone seems invested in explaining to you how their obsessions tick. I imagine being a Baltimore resident helped in establishing a camaraderie?

Anthony: My process was an equal mixture of deep internet holes and on-the-ground field work. Sometimes I would find something or someone interesting online and I would go out and film it the next day. I spent a lot of time walking and driving around the city, but I spent just as much time roaming around in Google Maps. That mixture of distance and intimacy is something I tried to play with.

Filmmaker: As two men prepare their hooks with “bait” for an evening of alleyway rat fishing, there’s a shot of a rat scurrying across the street behind them. It’s a humorous and pointed moment of a victim either getting away or walking directly into a trap. Could you speak about that shot?

Anthony: That was a lucky moment that I didn’t notice until editing later on. When you’re living in a city, it can be easy to forget that you’re living in an organic environment. I tried to keep as many reminders of that in the film as possible.

Filmmaker: Toward the end of the film, you feature shots of white and black men holding their slain rat prey up for the camera, the stillness of the image possessing a startlingly intimidating photographic effect. There are a few moments done in that static style that are quite striking. Was that your intent?

Anthony: I come from a photographic background, so I’ve always been drawn to those moments of portraiture in film. I like how the subject confronts the camera, the filmmaker, the audience, the fact that they’re being filmed. On the other side, the spectator looks and is aware of looking. It’s an acknowledgement that there is something inherently fictional going on. Those are aspects of the filmmaking process I never try to hide.

Filmmaker: While the term “essay film” has been used to describe your film, what’s most unique is your use of associative editing of narration, interviews, archival material, and present day footage to contextualize Baltimore today (with a hint of the “New Baltimore” of the future). It’s a film that never stops drawing connections between the past and the present. What was your thought process as you edited the film? How much material did you have to work with?

Anthony: With rats, I found a lot of ideas and images that had a strange gravitational proximity to a lot of other ideas and images. Rather than try to build towards one central idea or thesis, I tried to make a film that was a map of those connections as I saw them. It’s a huge and expansive topic and my film doesn’t even begin to cover a fraction of the material out there. Books such as Dawn Day Biehler’s Pests in the City and Antero Pietila’s Not in my Neighborhood: How Bigotry Shaped a Great American City were invaluable roadmaps for primary sources and materials to look into. I had an amazing research assistant named Andrew Holter and together we explored these archives as if they were a whole other terrain.

Filmmaker: The film features narration that at times sounds like a doctoral thesis. It’s an intertextual piece of storytelling that often explicitly shows documents with highlighted material that draw attention to noteworthy, alarming ideas. How did you craft the narration?

Anthony: I wanted to create something with the tone of the voiceover that came across as very clinical and removed, something whose objective nature would seed doubt throughout. By the end, the audience is questioning any platform that objectivity is based on. The ideas and the history are all real, but the narrative and causality as presented within the film are very much a subjective and flawed mythology.

Filmmaker: One of the most emotionally wrenching moments in the film comes when you lay 2015 Baltimore city statistics over a map of the city’s residential segregation put in effect decades earlier.

Anthony: About a year ago I came across the work of Evan Tachovsky, who had done a project overlaying statistical data onto redlining maps from the 1930s. I had just started figuring out ways of incorporating maps into the film, and so I reached out to Evan. We began talking about what these maps meant and how they worked in conversation with the different threads. In many ways, this film is a map of connections between a lot of people, places, and things. The overlaying of the historical and the present day statistical data was a way for all of these threads to coalesce, for the audience to make their own connections. I think it’s important to give the spectator agency in their own conclusions.