Freeze Frame: In Order of Disappearance 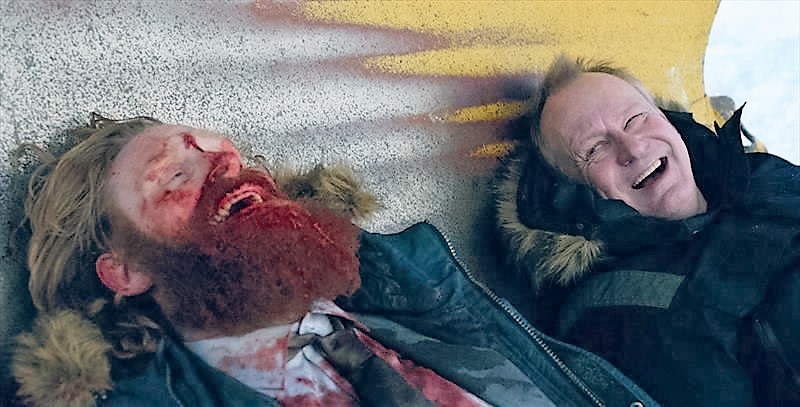 Kristofer Hivju and Stellan Skarsgard in In Order of Disappearance

A blond, fair-skinned Swedish actor playing a petit-bourgeois Swede of the old school who resurfaces in the Norway of the overnight economic miracle, the ubiquitous Stellan Skarsgard looks as blank in Norwegian director Hans Petter Moland’s determinedly revisionist In Order of Disappearance as the snow-covered swaths atop the rural roadwork his Nils Dickman rips through at the helm of his commanding danger-signal-yellow snow plough. The 2014 masterwork is only now making its long-awaited U.S. debut. 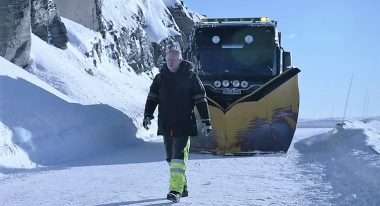 The color matches the baggy waterproof overalls that keep Nils’s sizable frame dry, and is just about the only hue outside of white visible during his back-and-forth runs from his small company’s garage. The limited palette suits this clean-living church-goer, as does the daily metaphoric grind: clearing a path for righteousness. The filmmaker’s concentration on the tools of his protagonist’s trade early in the film has a payoff. Paring so far down to essentials that he skirts the edges of minimalism is trademark Moland.

Nils veers widely off-course. After members of a local criminal gang brutally murder his only son, a well-meaning teen in the wrong place at the wrong time, he is no longer a model of behavior in polite society who turns the other cheek. He engages in a meticulously plotted vendetta, requiring as retribution for the loss of an eye the equivalent of a thousand. Around the tractor typically dark bits of blood begin to appear, their impact against the monochromatic topographical backdrop almost as powerful as if filmed in 3D. To reinforce the connection between subject and environment, DP Philip Ogaard shoots even the close-ups in exteriors with a wide-angle lens.

Moland distorts our perception of time in much the same way he juggles our reading of space. He and editor Jens Christian Fodstad find a smooth, consistent rhythm: no Eisensteinian shock, no jump cuts; rather sequences constructed from a few short, related shots that we glue together in our brains ever so lightly. The artists intuit rather than measure.

Nils’s commitment, a form of the grief therapy in Skarsgard-starrer Aberdeen (2000), transforms him into someone bigger than life. (The Norwegian title, the anachronistic term Kraftidioten, translates into prize idiot, or giant idiot, with a touch of idiot savant.) He becomes the catalyst for a nasty turf war between the Norwegians and their imported Serbian counterparts, with whom they had agreed to split territory for the bulk sale of cocaine — its presence adding an additional layer of whiteness to the mise-en-scene. His town’s “Citizen of the Year” is reborn as a tough cousin of Bronson or Eastwood, much as Skarsgard’s mocking station captain turns an idealistic young poet into a hardcore cynic in his and Moland’s first film together, Zero Kelvin (1995).

Nils’s understated expressions and gestures enable the slightest alterations to register resoundingly. They reflect the dominant categories in Moland’s multi-generic exercise: tragedy and comedy, or both simultaneously. The humor is extremely black, extraordinarily dry. According to the filmmaker, to pull this off and to defy the limitations of genre (I see it as, in large part, a revamped road movie), the themes and plotlines are relatively straightforward, even facile. The antihero does not complete a kill until the transgressor makes a ceremonial confession. The human toll along the way is 21, each marked following extermination by a text panel with character’s name, underground nickname, and appropriate religious symbol. These are multi-functional: organizing devices that are funny and stop the action for a novel distancing effect.

As in A Somewhat Gentle Man (2010) — the third of the four Moland-Skarsgard collaborations — positioning front and center a principal character with recessive features affords a peripheral but pungent space for eccentrics, oddballs, and other assorted marginals in whom Moland seems to take delight. Ever since the financial upswing resulting from the exploitation of North Sea oil, which has raised the nation’s economic and social stature relative to the Nordic lands its natives have always considered arrogant, Norway is much more heterogeneous than the provincial monolith it had been. Moland, who studied and worked for many years in the U.S. before returning home, reminds interviewers that the country still holds on to its naïvite. He often depicts the locals through the eyes of the Serbian competitors both taken aback and bemused. 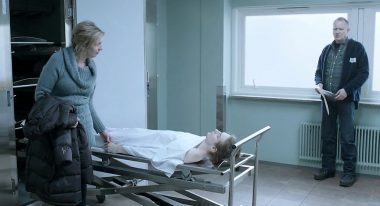 Recent additions include yuppie metrosexuals, high-tech lawbreakers, and a new social elite. Their architectural counterparts are sterile modern buildings that have replaced or thrown into literal darkness the quaint, folksy structures that had been predominant. The latter are pretty much excised in the film, certainly in shots of Oslo. Now we have immigrants from non-Nordic ethnic groups, as well as the unkempt drunks with bad facial hair who remain stigmatized remnants from a past rougher than that of the country’s more comfy and politically progressive neighbors.

And we have the gangsters. The Norwegian crooks run the gamut of types. Gifting us with gratifyingly perverse movie pleasure is the autocratic, narcissistic chief, handsome, suave Ole Forsby, aka the Count (a mannered, charged-up Pal Sverre Valheim Hagen, appropriately chewing up the scenery with the grace of a prima ballerina), a posh, PC wannabe whose illicit commercial success masks, up to a point, his unrestrained sociopathic proclivities. He receives the absolute submission he demands from his odd assortment of underlings—not a huge stretch in the fairly socialized Scandinavian countries, whose citizens are often thought of as sheep, putty in the hands of poseur leaders.

Members of the Count’s nuclear family are significant players in the interwoven web of intrigue. Barging into his home, uninvited and with regularity, is Marit (Birgitte Hjort Sorensen), his shameless, overdressed ex-wife and, pointedly, a Dane. The marriage managed to produce Rune (Jack Sodahl Moland), a son as adorable and precocious as he is possessively beloved by his otherwise fully self-absorbed dad. Skewing the relationships among the major players, the boy’s completely misinterpreted kidnapping redirects the narrative in diverse directions, one pairing the Count’s kid and Nils, that add gusto to an already potent brew. 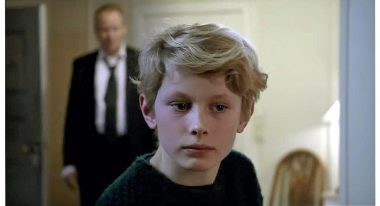 The Serbs are more alike than distinctive, save for patriarch Papa (an unrecognizable Bruno Ganz), whose hoarse whisper, noble bearing, and tribal hat of fleece set him apart from the coarser colleagues one or two generations his junior. Without spoiling anything, let me note that something dramatic happens with Papa’s grown son, a new recruit on an initiation spree. The principal characters — Nils, the Count, Papa — have such special relationships with their boys that the latter motivate the bulk of their decisions and actions. Three fathers, three sons. The dads could not be more different from one another, but the parallel serves a formal unifying purpose — a simple one.

Drawing Nils with deceptively weak physical and psychological attributes allows Moland to turn the spotlight on minor characters, and to critique their place in society: petty bureaucrats, for example, such as the smug medical examiner and his assistant, and two local cops, lazy, sub-literate fools who are intentional cliches. It also helps foreground — and judge — members of his own family, for this filmmaker the source of all conflict. On a scale of morality, Nils rests midway between his grieving wife and his estranged older brother. His wife, Gudrun (Hildegun Riise), is an unapologetic conformist, a quiet sheep who, high on the Molandian list of sins, dares not rock the boat by questioning authority figures. Brother Egil, aka “Wingman” (Peter Andersson), however, is rebellious, crass, and unreserved, a former member of the local gang who has paid his dues with jail time and now fills his time keeping a frightening Chinese mistress. His code of ethics is close to the Count’s, but familial relationships can pierce even his hardened shell.

No avant-gardist, Moland works within basic conventions of narrative filmmaking. Here he pits good against evil — classic melodrama — in a mélange of established genres. His uniqueness lies not only in the manner he fits parts into the whole, but also how he arranges them around one another. Comedy and tragedy are not separate. It remains to be seen how that relationship will manifest itself in the director’s upcoming American remake, with Liam Neeson in place of Skarsgard. Many filmmakers consider comedy the most difficult kind of film to make. Make that tragicomedy, and we can safely say that Moland is a master of the universe.