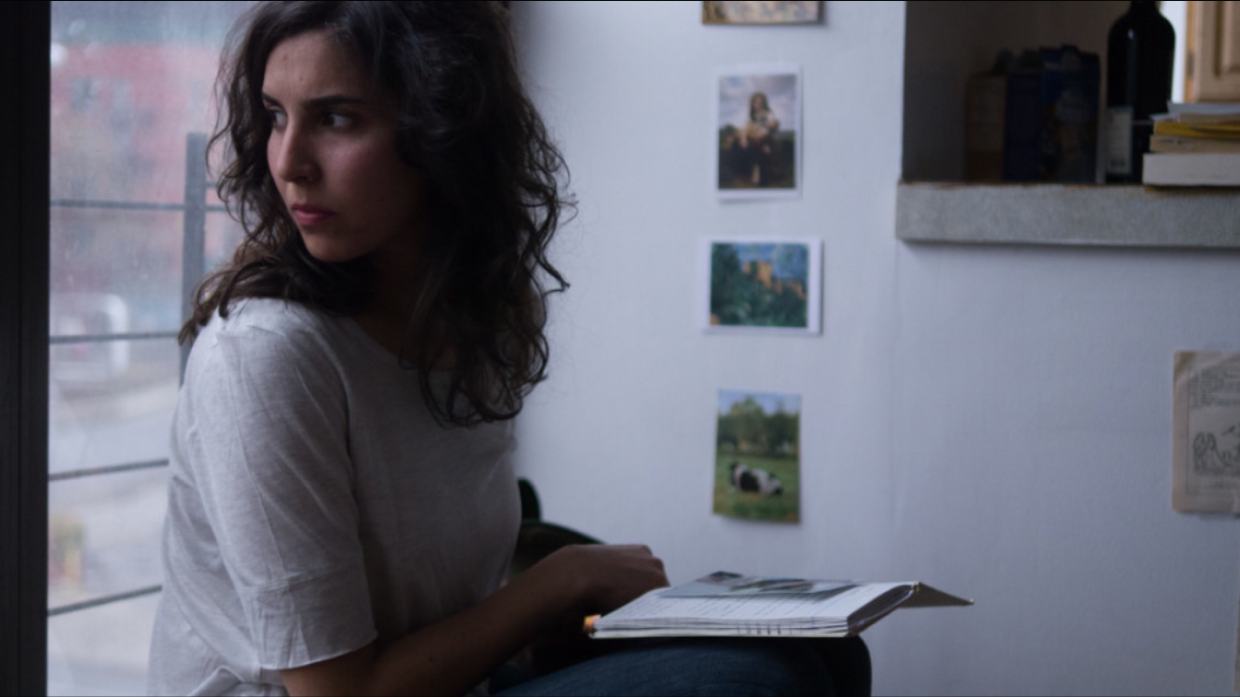 Matías Piñeiro has been living in NYC for a few years now, so it’s logical he’d eventually make a film set at least partially there. I can’t pretend to a lack of rooting interest: I know, casually or closely, a semi-significant number of people who worked on or acted in this, did a set report (meaning I spent part of the first viewing waiting to see what was actually being said in the shot I saw filmed) and, if you go to a lot of rep cinema in the city, Piñeiro — a serious, inveterate cinephile — is just kind of generally around. Hermia & Helena is in the honorable tradition of movies made by people who love movies to the point of idiocy, but not to the point where they can only make movies about other movies. The references are sneakier: the film’s dedicated to Setsuko Hara, Ozu’s star in Late Spring and Tokyo Story, and the latter’s famous thesis line, “Life is very disappointing, isn’t it?” gets paraphrased in a much lighter-hearted context here.

Piñeiro’s previous films worked with specific Shakespeare plays at extended length, as in Viola‘s Rivettian rehearsals of Twelfth Night, but Hermia primarily uses A Midsummer Night’s Dream as a pivot point at a crucial moment; the narrative exists in a largely more autonomous and unrelated universe that avoids crude dramatic parallels with the play. The plot more or less circles around the semi-romantic semi-entanglements of Camila (Agustina Muñoz), in NYC on a fellowship to translate the play for a production back in Buenos Aires. She has mixed feelings about bouncing out at the start of a promising relationship, but, as she cheerily says, “I’m always up for contradiction.” So’s Piñeiro, a fan of non-deterministic narratives whose aesthetic here is continuous with prior work — lots of smooth camera glides from one medium close-up to another, the seamless motions linking together each shot/scene (per Mizoguchi, the two are frequently the same) — but with a number of new fillips.

Most conspicuous and constant are the double-/triple dissolves of a bridge + assorted local scenery by which the film hops between NYC and Buenos Aires: these are quite extended, often pausing the dissolving process itself long enough to make it opaquely obscure what’s being transitioned to. The play’s text is overlaid at crucial points, there’s a movie-within-a-movie — a compilation essay film by Camila’s sometime squeeze Garry (Dustin Guy Defa), his voiceover lifted from Rebecca — and, at the aforementioned pivot point, reverse negative for a dream sequence. Piñeiro’s withholding and distribution of information has always required close attention to not fall behind, and the structure here is particularly tricky. First we see Carmen (María Villar), Camila’s friend and fellowship predecessor, leaving NYC, then her return and the day of Camila’s departure. This day is repeatedly returned to in the aforementioned dissolves that, while hopping time and space, also act as something like act division markers. The title card each time places the same narratively segmented day of Camila’s departure one month further back from the narrative present, the only obvious marker of how much time has passed.

The film takes care not to try to definitively characterize Camila. The final stretch has her meeting the in-person, effectively sperm donor father she never knew (Dan Sallitt), but Piñeiro isn’t doing anything as hamfisted as trying to use his absence to “explain” something about Camila. Lightness of touch and commitment to noncommital characters shouldn’t be mistaken for weightlessness — the film is delightful in ways that are deeply if obscurely deliberate. Surface pleasures abound: in Spanish, the dialogue is Baumbach-fast, while slower, inherently awkward lingua franca English is always fun, but Hermia‘s deeper appeal is harder to articulate. This is the definition of what I think of as an “open” film, a term whose meaning to me I feel obligated to define. A closed film is one in which every element — dialogue, shot choices, music, production design, the whole lot — is meant to point the viewer and narrative towards one correct, final direction whose meaning is reasonably clear and fixed. This isn’t a bad thing per se (Zodiac is a recent-ish masterpiece of this kind of of filmmaking), but Piñeiro wants to make an open film: we learn some things about Camila, but never everything, let alone what we’re supposed to make of it, and no final psychological profile or thematic takeaway is indicated. The pleasure is in the freedom to think, speculate and be continuously surprised.

Ruth Beckermann’s The Dreamed Ones (which, unusually for a TIFF selection, has already played in NYC at Lincoln Center’s Art of the Real — now I regret not paying closer attention at the time) is a film I intuitively vibed with, but would completely understand anyone being simply nonplussed or actively hostile towards. In a recording studio, two actors gather to read the multi-decade, mostly tortured correspondence between poets Ingeborg Bachmann (Anja Plaschg) and Paul Celan (Laurence Rupp). After some context-setting titles, we get extended close-ups of the two performers reading the letters against blackness. They’re speaking directly into studio mics, so room tone essentially doesn’t exist, just the words and massive close-ups to scan for flickers of emotion. It’s not that there’s some kind of meta-textual trickery in which the lines between performer and performed become increasingly slippery; it’s just inevitable that performers channeling strongly negative emotions should chime with their default facial expressions, especially given that Plaschg’s default expression is a kind of constant, seemingly purposeless intensity.

Bachmann and Celan’s correspondence was essentially along the lines of the kind of intimacy that, no matter the sexual/geographical status of the two correspondents involved, forges an extremely strong bond of mutual, self-perpetuating/-exacerbating misery. Put simply, this is a relationship that never, ever stops sucking, to the dubious satisfaction of both parties, whose overwhelming literacy and fluidity of florid thought will not help them reconcile. In between the readings, the actors debate the finer points of hand-rolled cigarettes, listen to James Brown, and share the camaraderie of two people doing a job that’s aided by a real rapport. Oddly, given the essentially severe nature of the project — at least half of this is close-ups and readings in a studio void — the film’s appeal becomes essentially narrative: what new kind of misery and trouble will be rolled out? “I no longer have any way to make amends, and that is the worst thing that can happen to a person,” Bachmann laments in one letter, and the sentiment rings true, a beacon amongst a fair amount of metaphorical murk; for all its stand-offishness, it’s a surprisingly affecting film.

Cristian Mungiu’s Graduation comes some 11 years after the Romanian New Wave’s international breakthrough, The Death of Mr. Lazerescu, kicked off years of darkly funny, mostly handheld-shot examinations of moral helplessness ineffectually facing off vs. an impassively unhelpful bureaucracy. Mungiu seemed at first a bit of a pastiche artist: his debut, 2002’s Occident, was a perfectly fine but clearly second-hand comedy in the then-ubiquitous mode of multiple overlapping stories told with diluted-Kaurismäki quirkiness. For his slightly overvalued but strong enough follow-up 4 Months, 3 Weeks and 2 Days, he grabbed Lazerescu‘s DP Oleg Mutu and copped that film’s effect without adding much of his own. If Mungiu’s last film, Beyond the Hills, moved towards an original style and setting (a hothouse nunnery) outside the (stereo)typical interests of the Romanian New Wave, Graduation is a full retrenchment to his sophomore effort, again to lesser effect.

The hilariously named Romeo (Adrian Titieni) — a middle-aged dad who’s the opposite of a heartthrob — has for years been academically grooming daughter Eliza (Maria-Victoria Dragus) to get her to college in the UK and, hence, out of a country he can’t help repeatedly lamenting has nothing left to offer and can’t be changed. When Eliza is sexually assaulted and obviously shaken, the results of the final exams she’d normally ace — the last necessary step to securing her scholarship — are in jeopardy. To unethically (?) compensate, Romeo sets about greasing the bureaucratic wheels, following through on favors in return for all those helping. The dialogue banalizes and extols corruption as a normative virtue: those who’ve bent the rules for others are routinely described as “always helpful and kind,” and “people should help each other” is a nicely euphemistic way of describing such conduct.

Mungiu is very good at conspicuously handheld compositions that are seemingly arrived at casually, but his work is often semi-invisibly immaculate. When Eliza is giving her testimony at the police station to the jocularly corrupt chief inspector (the ever-intimidating Vlad Ivanov), she sits facing the camera alongside her dad. The inspector has his back to the camera, while various functionaries pass and a lower-level flunky goes through some files back stage left, his facial expressions while obviously listening to what he shouldn’t forming a whole sub-narrative of their own. The dramatic weight and focus of the scene moves around its +/-five participants, each performing outstandingly on their own if you zone in on them. The film is funny in a kind of state-of-the-nation, burn-it-all-down way and wrought with care throughout, but two hours of this is ultimately too much — we’ve seen this terrain with fresher eyes many times over. That said, I’m always up for another round of the bleakest comedy possible — if you enjoy this particular pocket of humor, which is a very acquired taste, go forth.