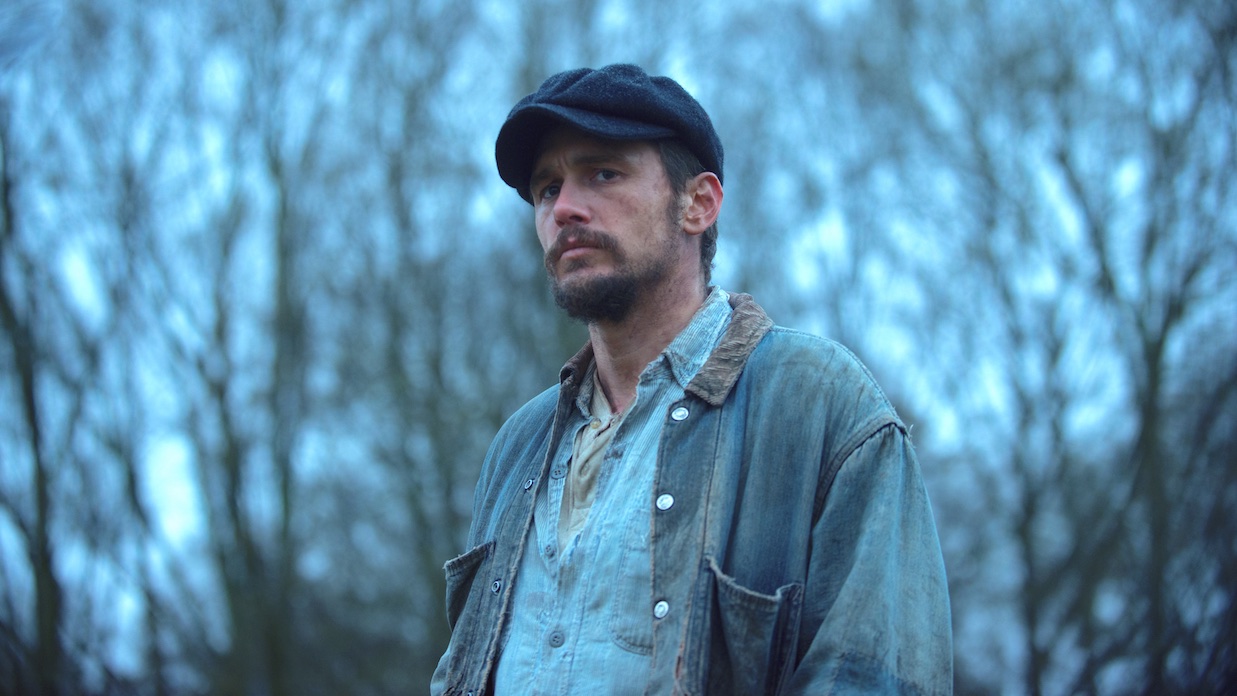 Continuing his strike as one of the most tireless and unpredictable multi-hyphenates working in film today, James Franco brings to Toronto the North American premiere of his latest feature, an adaptation of John Steinbeck’s first novel, In Dubious Battle. A tale of labor strife amongst fruit pickers and orchard owners in 1930s California, the work mixes politics with human drama as it captures the rivalries and conflicts that arise in times of activism. In addition to directing, Franco stars alongside Vincent D’Onofrio, Robert Duvall and Selena Gomez. The screenplay is by Matt Rager, who scripted Franco’s other recent Great Novel Adaptation, The Sound and the Fury and As I Lay Dying. Below, Franco discusses his love for John Steinbeck, what a tale of the ’30 American labor movement has to teach us today, and why he’s embraced such a frenetic artistic output.

In Dubious Battle screens at the Toronto International Film Festival on Monday, September 12.

Filmmaker: When did you first read Steinbeck’s novel, and what inspired you to direct a screen adaptation? As a raw material for cinema, what did it offer you that you wanted to explore?

Franco: I grew up reading Steinbeck, and I read the novel in high school, but it definitely wasn’t one of my favorites. (Those were probably East of Eden and Cannery Row.) But when I acted in Of Mice and Men on Broadway I reread a bunch of Steinbeck, including In Dubious Battle. It is part of the unofficial “Dustbowl Trilogy,” which also includes Of Mice and Men and The Grapes of Wrath. They all take place in Northern California, which is where I grew up. After doing Mice… I was very interested in doing some Steinbeck material on screen, but I found that while Mice… was perfectly suited for the stage because of the incredible characters and the intimate scenes, it wasn’t as well suited for the screen because it didn’t require any scope; all the major scenes took place in confined spaces like the bunkhouse. But In Dubious Battle, although it was weaker on character, had an epic conflict between two irreconcilable groups. Once the conflict starts it never lets up, and man,y many people, of all kinds, are brought into the fray in various ways. I thought that that kind of set up would be much more cinematic, and the tension and conflict would drive the film from beginning to end.

Filmmaker: You’ve made In Dubious Battle following adaptations of novels by Faulkner and McCarthy, and a film about Tennessee Williams, in addition to other works of literary provenance. How much do the stylistic traits and formal devices of these individual works shape your decisions in terms of adaptation and direction, versus your own developing style? In other words, do you seek to remain faithful to these works, or to artfully betray them in some way?

Franco: With all of these classics my primary intention is to be faithful to the novels, in spirit, structure and style whenever possible. I started with McCarthy and Faulkner, two of my favorite writers. I figured that only adapting the story and not the style would not be adapting those writers, because their styles are so integral to what they write. The Sound and the Fury without Faulkner’s style and structure is just southern melodrama, so I had to adapt everything, not just the narrative.

And now with Steinbeck I was trying to be as faithful to his spirit as possible. Some things changed from the novel, mainly character developments, because Steinbeck was still learning how to create fully dimensional characters when he wrote this early book. We added dimension to all the characters, and wove them together more, sort of like an Altman film.

Filmmaker: Why tell a story about the 1930s labor movement in the States today, during a time of global capitalism? How does the story you are telling connect to the present moment?

Franco: Filmmaker: It’s very topical; the idea of battling “the man” will always be relevant. Unions, wages, 1%ers vs. the rest, strikes — these are things that will always be relevant as long as there is an exclusive upper class resting on a larger lower class. But what I was really interested in showing was man in conflict with himself.

Filmmaker: Let me ask you about your famed productivity. In a world where so many directors wait years between movies, the sheer number of films you’re able to make can seem mind-boggling. That said, there are directors in the past — Fassbinder and Raul Ruiz come to mind — who have made a kind of hyper-productivity their own style. Could you tell me what role this extreme productivity and the volume of your film work plays in your overall concept of yourself as an artist?

Franco: Fassbinder is a huge influence: his rebellious spirt, and his incredible productivity. He was doing in an independent, artistic, pro-active way what they did in the old studio days when John Ford would direct three movies a year. Also Cassavettes is a huge influence, the ultimate “one for them/one for” me creator, whose “one for them” was often a classic such as Rosemary’s Baby. He learned how to pull the kinds of movies that he loves into being when no one else would.

When I do many different kinds of things, and in quick succession, it allows me to take more risks, because I’m not putting everything in one basket. But it also allows me to be more disciplined in my approach, because each project gets its own approach. If I did fewer projects more of a burden would be put on them to deliver everything I want, whereas doing many allows me to spread out my ideas among many projects.

Filmmaker: Finally, In Dubious Battle deals with, in part, the decision-making of groups. Is there a parallel here to the movie business in any way?

Franco: Yes and no. Many people make decisions on movies, but usually in tiers, and not all at once. A director will make decisions on set, and might consult with a producer about overarching ideas and then go and discuss shooting approaches with a DP. Later, after its shot, the head of a studio, or a financier might come give notes.