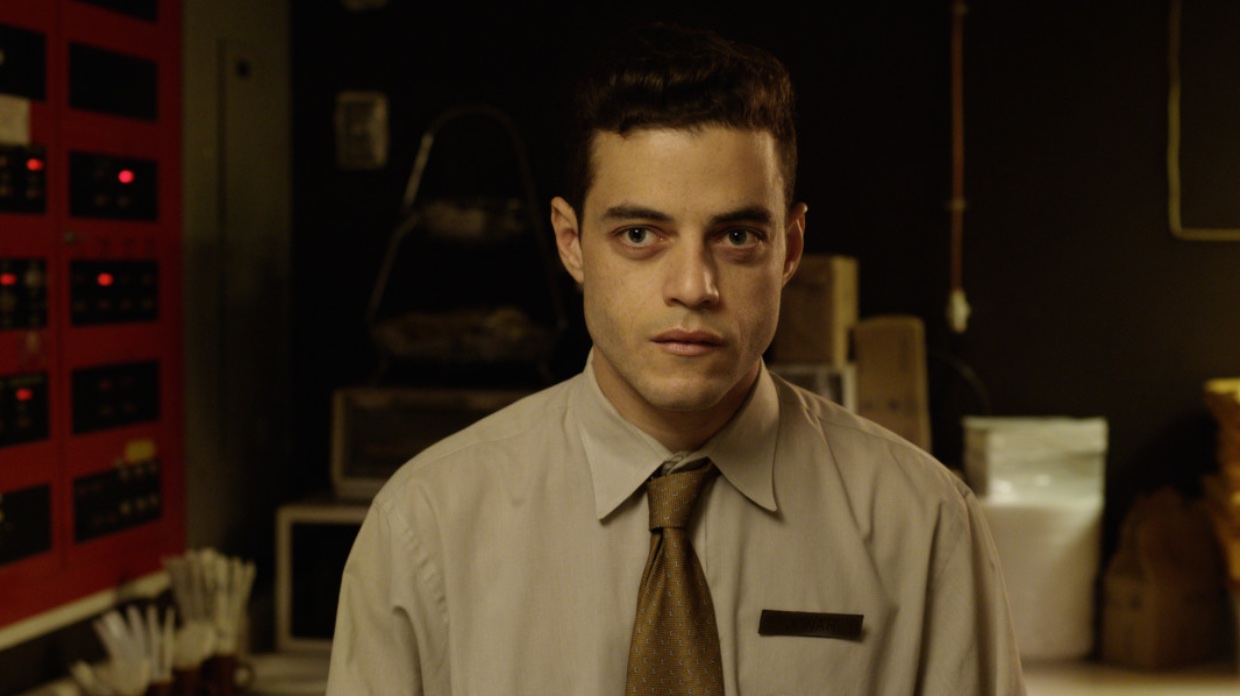 by Scott Macaulay
in Directors, Interviews
on Sep 10, 2016

“There are a lot of places people can go to find simple stories. My brain is just not one of them.” That’s writer/director Sarah Adina Smith talking about her filmmaking sensibility, which gravitates towards psychological mystery and cinematic mindbenders. She follows up her haunting, SXSW-premiering drama The Midnight Swim with Buster’s Mal Heart, a movie dealing with psychological breakdown set against the expansive natural spaces of the Montana wild. In a time-skipping narrative, Mr. Robot star Rami Malek plays an eccentric fugitive who breaks into luxury mountain homes while their owners have decamped for the winter. As we learn, he was once married, with a kid, and working the night-shift at a bland corporate business travelers hotel. Something obviously happened to take him from there to here. Below, Smith talks about depicting madness on screen, her own journey as a filmmaker, and what beginning filmmakers need to learn today.

Filmmaker: Buster’s Mal Heart sounds like a very different film than your debut, The Midnight Swim. How’d this become your second feature? What drew you to the material, and what in this story is personal to you?

Smith: The Midnight Swim was about women and water. I knew I wanted my second movie to be about a man and a mountain.

Both movies propose a cosmology, seen through the eyes of a so-called “insane” character.

In that way, Buster’s Mal Heart is a philosophical complement to The Midnight Swim.

I tend to be interested in making movies where the insane turn out to be right about the nature of the world, so that’s what likely drew me to both stories.

The deeper I go with my art or my writing, the more I have access to states of mind that don’t cohere neatly with the mindset required for everyday life.

Which is a fancy way of saying, I know what it’s like to feel crazy. I have a lot of empathy for characters trapped in the agony of mental illness, and I consider myself extremely fortunate to just be a visitor.

Filmmaker: The Midnight Swim was produced for a very low budget, partially raised through crowdfunding. Now you’ve presumably got a bit of a bigger budget from Gamechanger Films, and name actors in Rami Malek and Kate Lyn Sheil, among others. How did this film come together in terms of its financing and its casting? What was the sequence of events?

Smith: I wrote the script at the Screenwriters Colony in Nantucket, which is an incredible month-long fellowship and kind of like being invited to heaven for four weeks.

I emerged from that deeply meditative month with this really weirdo document. It wasn’t like a script in any traditional sense of the word. It was an outline for a movie made with drawings and lyrical scene descriptions, smattered with dialogue.

But I had this strange sense that it was done. So I sent it to my producer Jonako Donley and my husband/cinematographer Shaheen Seth. When they came back with two very enthusiastic thumbs up, I knew we had something. But I also knew it was going to be extra hard to find financing for such a non-traditional project.

Luckily, I had already been talking with Gamechanger about another script of mine and they were really excited about doing a film together. But once I had written Buster I knew it had to be my next film. So I shared it with Mynette Louie who totally got it. I think it helped that she was already a fan of The Midnight Swim.

And we actually had Kate Lyn Sheil attached before we approached Gamechanger and our other financiers. I had written the part of Marty for her because I think she’s brilliant and so uniquely grounded. Gamechanger loved her too, and they signed on without even having a lead actor attached.

Casting the lead role was the biggest challenge because I was set on casting a Latino actor for the role, which I had written to be bilingual in Spanish and English. Gamechanger felt equally strongly that we should cast a native Spanish speaker. We spent about six months trying to find the right fit and kept striking out on availability. It finally became clear that if we were going to make the film in 2015 we needed to broaden our search. But it was really important to me that we cast an actor of color in the role because the character Jonah feels like an outsider in an otherwise very white community. Pretty quickly we all realized that Rami Malek was the guy to play this role. This is before Mr. Robot came out, so I had only seen his work in Short Term 12 and The Pacific, but I thought he was incredibly compelling. And plus, I did a tarot card reading and the cards said he was the one. The cards don’t lie. I really can’t imagine anyone else playing the part. Rami’s a disciplined craftsman and his own toughest critic. He’s one of the hardest working, most inventive, and gracious actors I’ve ever met.

The missing piece was DJ Qualls. I think we cast him just two days before we were set to shoot — it was down to the wire. I had been a fan of his since Hustle & Flow and and I’m obscenely happy with what DJ brought to the character. I’m thrilled with all of the performances.

And I also realize how lucky I am that it all came together as easily as it did!

Filmmaker: I know you received a grant to shoot the film in Montana. Tell us about your choice of locations, how they influenced your filmmaking, and what level of support, other than cash, you were able to get from Montana. Is there much of a film infrastructure there?

Smith: Location is absolutely key for me because I rely on it to be a spiritual reflection of the story. I originally went scouting in Colorado, where I’m from. But the spirit of Colorado wasn’t quite extreme enough. I ended up choosing Montana because it’s the kind of place people go to get lost in nature and confront the cosmos. It’s a place that attracts lonely souls, quiet thinkers, and beautifully independent personalities.

We were able to tap into a vibrant community of artists in Missoula for much of cast and crew. I can’t say that the film infrastructure is all there yet, but it’s growing! We found good people and support at every turn.

A lot of people asked us why we didn’t just shoot across the border in Canada where we’d have a better tax incentive and more film resources. But I felt really strongly that this was an American story that should be told in America.

And Montana has a mystique you can’t find anywhere else. It’s just something in the air.

Filmmaker: Your film is described as a mind-bender, and your first feature also worked in a register of psychological mystery. What tension do you experience as a filmmaker when tackling these complex stories? Are you ever advised to make your stories simpler? How do you balance storytelling clarity with a sense of mystery?

Smith: There are a lot of places people can go to find simple stories. My brain is just not one of them.

I’m drawn to filmmaking as a means of exploring the mysteries of existence. So my films tend to require an audience willing to engage on that level.

That being said, I think Buster’s Mal Heart is a really fun watch. It never takes itself too seriously. It approaches even the biggest mysteries with an eye toward the absurd.

I never aim to be mysterious. I think the universe is just a very mysterious place.

Filmmaker: Finally, you’re the co-founder of L.A. creative studio Friend of a Friend, and you’re also a visual artist. For young filmmakers starting out, what skill sets should they develop? What abilities should they have that will help enable them to make their first features?

Smith: I think it’s really important for young filmmakers to be absolutely unafraid to learn.

Above all, I’d tell young filmmakers they should write and edit. Learning to write will help you control your destiny. And learning to edit will make you a better writer and a better director.

But when you’re starting off with a micro-budget, being able to do almost everything yourself is pretty key. No one is going to hustle more than you for your project, so you have to be super involved in every aspect.

I’ve had to develop a variety of skills through sheer necessity — we’ve always had to hustle and do a variety of things to survive and get projects done. But I’ve never regretted learning a new skill. It only gives me more confidence.

It also means inspiring people to join you on your crazy mission. And that will only happen if you’re the hardest working person in the room.