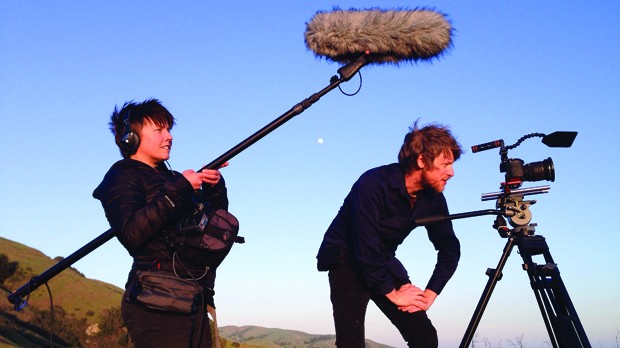 Describing the dynamic in the editing room of Ben Dickinson’s stunning tech-scene social satire, Creative Control, editor Andrew Hasse says, “Ben and I know each other so well and have this common language and film-school training, and Megan brings an intuitive, no-nonsense, outsider’s perspective. Sometimes Ben and I would work on a cut and say, ‘We got it.’ Then Megan would watch it and say, ‘Really?’ She kept us honest, and we knew it wasn’t right until we all agreed.”

“Megan” is Hasse’s editing partner, Megan Brooks, and this year the cutting team has credits on two striking independent films — pictures that just happen to be their first two credits as narrative film editors. In addition to Dickinson’s film there is Jon Watts’s Cop Car, a nail-biting cat-and-mouse tale involving two kids, one bad cop and one stolen police vehicle. The jobs couldn’t have been more different. For the latter, Brooks says she and Hasse explored different tonal possibilities through music choices but, for the most part, the directive was to make the movie “sequential.” For Creative Control, on the other hand, Brooks says the goal was to “help Ben figure out the tone of the movie he shot, not necessarily the movie he wrote. How do we take you on this emotional, psychological journey so that it doesn’t falter or have a hiccup all the way through the end?”

Of their process, says Hasse, “We like to be on set as much as we can — which we did for Cop Car and Creative Control — to be a second and third pair of eyes for the director, as well as to do on-set edits and make sure we’re getting the coverage and continuity we’ll need. We also love being on set to meet everyone and make friends and be part of the team. Knowing the team and seeing the process really helps us keep up the creative energy during the long months of editing.”

Hasse and Brooks live in Berkeley, where Hasse is from, but both spend a lot of time in New York. In fact, Hasse went to New York University, where he met both Watts and Dickinson. In the mid-aughts the three were among the co-founders of production company Waverly Films, but Hasse had to return to California in 2005 when his father got sick. Remaining there, he began directing a documentary on food systems, Edible City. “That’s how I met Megan,” Hasse explains. “She was working as a digital designer and animator doing Web spots for big Silicon Valley companies. She’s originally from Minnesota, went to University of Minnesota for psychology, and has had countless jobs: teacher, farmer, garbage collector, surfboard maker, carpenter and set-builder.”

“I never thought about film or live action,” Brooks remembers. “I came and hung out one day while Andrew was editing, and I said, ‘How about you try this, or this?’ He had been working on the film for four years, and I came in with a new passion. I knew right then that live action was more where my emotions and soul were.”

Working together on weekends for a year, Brooks and Hasse finished Edible City, which is just now being released through FilmBuff. Going forward, they are making their own work, including two satiric shorts about Burning Man culture and two screenplays. And they are looking for more films to cut. Do producers ever balk at the idea of two editors? “They usually hire one of us,” Brooks says, “and then we say, ‘We have a partner!’ They usually just pay for one of us, but we both go — although people now are starting to hire us both.” — Scott Macaulay/Photo by Cristina Valverde