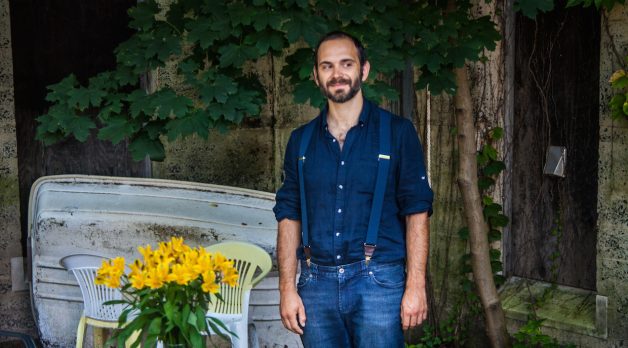 “When I was 15, I decided that making films wouldn’t be for me,” Carmine Grimaldi recalls. He grew up renting “tons of films” from a (predictably) now-defunct video store, but making narratives “seemed really dull — all the preparation, logistics and getting people to repeat things just didn’t excite me.” When he was studying the history of science at the University of Chicago, an introduction to documentary class changed his mind, leading to a fellowship at Harvard’s Sensory Ethnography Lab (SEL).

Unusually, Grimaldi made his first festival appearance with the premiere of three shorts at this year’s True/False Film Festival. All begin as mysteries about what we’re seeing, accruing narrative legibility without subjects explaining who they are or orienting the narrative linearly. The attention-grabbing results are in keeping with the SEL’s broad commitment to finding new visual and sonic languages for traditional-ish verité goals.

The most discombobulating of the three, Servicing Guide: Fannie Mae Single Family, Subpart A4-2.1-02, Property Inspection Vendor Management and Oversight (11/12/2014), follows an inspector on his damage-assessment rounds, a fearless camera bobbing through a gloomily vigorous excursion into household ruins, appraised with understandably desensitized bravado and commentary from our guide. If Only There Were Peace (co-directed with Deniz Tortum), follows a small Turkish film crew making a hokey drama about war, a simple subject refracted through multiple levels of Kiarostami-esque what’s real/what’s fake disorientation. one of the roughs, a kosmos begins with bad-horror-film organ music played by an alarmingly grinning, imposingly bearded man; by film’s end, he’s been placed as the father overseeing a small family farm, with the family’s own musical contributions serving as the bracing counterpoint soundtrack to a pastoral portrait of their routine.

“I’m not finding a style or way to do something that’s uniform,” Grimaldi says of the stylistically disparate works. “Instead of capturing the ‘rhythm of life in this place’ — which people always put on their applications — I’d like the rhythm to capture the film and shift it.” All three shorts came about from itinerant circumstance and personal connections old and new. Grimaldi met Servicing Guide’s subject at a bar in northern Maine and followed him on his rounds. Peace was shot in a day, when Grimaldi stumbled upon the crew while visiting Turkey with his journalist partner, sometimes shooting on faith (Tortum translated the Turkish for him after the fact). The family in kosmos were longtime acquaintances Grimaldi stayed with for a month, while the short that got Grimaldi into Harvard was whittled down from 100 hours of shooting while traveling with a carnival through rural Illinois. The plan is to keep filming the carnival, “but the awkward thing is that the style is changing, because I’m changing, and so the first time I ever filmed a movie is obviously different from what I’m filming now. So I might cut it into some shorts, some medium-length films, I may do a feature … I’m still grappling with it.” — VR