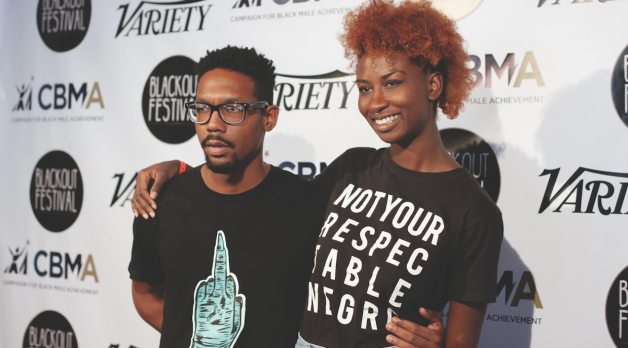 When Michael Brown was shot and killed by police officer Darren Wilson in Ferguson, Missouri, in August 2014, images of the city’s militarized police and civilian protest were everywhere — on every television screen, across every Twitter feed. Journalists, civilian and professional, flooded into the small city while the protestors’ chant, “hands up, don’t shoot” became an international rallying cry, shouted by activists from Hong Kong to London. But, as Sabaah Folayan says, “what was being put on the news was only catching the surface of the issues. Sensationalist, inflammatory language was hyping the story to get ratings, but as a society we needed to get to the truth and to positive dialogue.” An independent documentary on Ferguson and its aftermath might be a way to add a perspective and correct the record, but it would have to be, as Damon Davis says, “an actual movie worth watching, not one where we’re just stroking our own egos. How could we use this movie as a tool to change the world?”

Aiming toward those goals is Whose Streets?, a character-based  documentary by activist, artist, musician and director Davis and writer, activist and director Folayan. Whose Streets? follows seven figures caught up in the protest movement, including three main subjects: Brittany Farrell, a nurse and young mother; David Whitt, a recruiter for the civilian organization Cop Watch; and Tory Russell, a cofounder of Hands Up United. “Some of them are doing direct action, others are trying to participate in the political system,” explains Folayan. “We want to use our human stories to make the film more than about the issues — it’s about people trying to survive and have safety and education for their children. It’s about how activism can be part of one’s life, and what sacrifices you have to make to be part of an activist community.”

Whose Streets? represents the first collaboration between first-time filmmaker Folayan and Davis, who has made a lot of work across many mediums, including a previous doc, Borrowed Time, in 2008. The L.A.-based Folayan was a Columbia University pre-med at the time of Ferguson and headed there with the intent of doing print journalism. Soon, though, she realized “we couldn’t keep up with the news cycle and maintain justice to what we were seeing.” Deciding to make a film, she also realized she needed an inside perspective.

At the time, Davis was at work telling the Ferguson story himself. “I was born and raised here, from a similar community [as Ferguson],” he says, “and I was tired of outsiders coming in who can’t fully empathize with the complexities, the microaggressions of life here.” Folayan was different, though. “She really understood what was going on,” says Davis. “Other people who come here, you can instantly smell their ambition, like, ‘This is going to be my ticket.’ I didn’t get that from her. And she can take criticism, and she can give it to me.” Davis says Folayan also impressed him with her argument about why the film needed to include a female voice. “We talked about how black women are constantly working and being overshadowed, and that’s the truth. We needed to do this together.” “Damon is a consummate artist,” says Folayan. “He has brought me a lot of insight about the process of creating, about how to protect your vision and stand firm in what you are trying to do.”

Now in post, Whose Streets? has attracted a number of impressive supporters, including the Sundance Documentary Film Program, the Firelight Fund and Good Pitch. The film follows its characters up through the one-year anniversary of the non-indictment and now, says Davis, the editing challenge is to “know and respect [our subjects] while weaving their lives into a larger historical context.” “We’re trying to make something that black people can feel good about,” he says, “where they can see themselves as both heroes and complex human beings. This is much bigger than ‘making a movie’; this is for the generations, for the people who haven’t even been born yet. That’s what’s keeping me up at night.” — S.M./Photo courtesy of Damon Davis and Sabaah Folayan