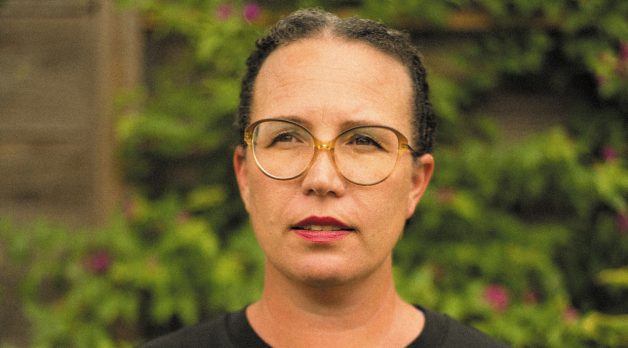 “I might stretch the definition of ’new face,’” jokes Darcy McKinnon, “but I am new as a documentary producer.” Indeed, McKinnon’s first experience in film came more than 20 years ago when, out of college, she worked as an assistant editor in San Francisco. That led to coproducing the one-hour 2006 POV documentary, Maquilapolis, directed by Sergio De La Torre and Vicky Funari, about activist women factory workers on the border between Tijuana and the United States. The film is, says McKinnon, “responsible for a lot of the ways I want to practice, where social justice and art come together. It was one of those films that did impact before impact was cool. With some of the women in the film, we’d show the film at an art gallery on the Texas side of the border and in a plaza on the Mexico side.”

But the Florida-born McKinnon decided she didn’t like California and moved to New Orleans. “I was in my 20s and dumb enough to think you could just make films anywhere, which, at the time, wasn’t true.” So she became a seventh grade public school history teacher. Teaching during Katrina, she says, was another “framing moment. It became clear what happens when you have news, journalism and documentary coverage from people who aren’t from a place and aren’t accountable to that place.” The mainstream media coverage, she says, “wasn’t helping us rebuild our city. That was probably the moment when I decided to stay here.”

McKinnon began to volunteer with the New Orleans Video Access Center (NOVAC), joined the board and, when the executive director position opened up, took it as an interim position “just to keep the lights on.” She was still in the job 10 years later, and the organization was making local, social-issue work that was gaining notice on the festival circuit and beyond, what she calls “the community-media umbrella.”

It was at NOVAC that McKinnon was approached by filmmaker friends who needed support. Soon, she says, “I found myself with three projects and a full-time job.” So, this past June, she left NOVAC to produce full time. The first of three picture to reach audiences will most likely be C.J. Hunt’s picture-locked ITVS doc, The Neutral Ground, in which the writer and comedian satirically documents the struggle around New Orleans’ Confederate monuments. In late production is Commuted, Nailah Jefferson’s doc following the post-prison life of Danielle Metz, whose triple life sentence for a nonviolent drug offense was commuted by President Barack Obama. And currently in post is Roleplay, Katie Mathews’s documentary “that follows a diverse group of college students who confront rampant sexual violence on their campus, creating immersive play out of their real-life traumas.”

All three projects have gained momentum, which is not to say that McKinnon hasn’t stressed about the producer’s life. “I’ve taken a few field-producing jobs, and my filmmakers are like, ’What are you doing?’ And I’m like, ’You know, you gotta keep your name out there!’” But with her projects having secured momentum, McKinnon is finally able now to pay herself salaries from the films—“which wouldn’t have been true two years ago. But am I still nervous? Yes, I’m still nervous.” One thing she has no intention of, however, is leaving the Gulf South: “When I think about the mission statement of my career, my work is centered on uplifting the work of and opportunities for filmmakers from the South, who represent the actual diversity of communities here.”—SM/photo by Aziz Abdul