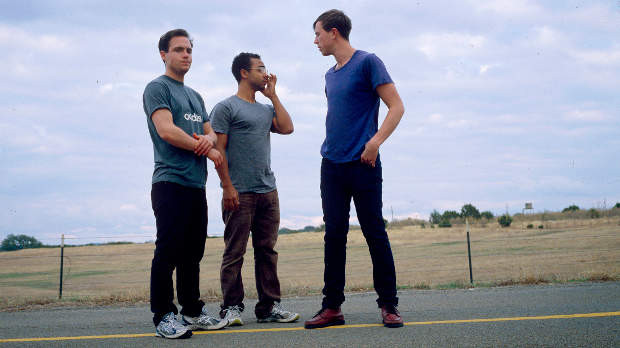 If you listen to the radio, then you may have seen the short documentary essay films of the New York collaborative, Everynone. For the last two years, the three filmmakers — Will Hoffman, Daniel Mercadante and Julius Metoyer III — have been creating witty and allusive short films to accompany the popular WNYC radio program Radiolab, heard on more than 300 public radio stations around the country. Radiolab explores science and philosophy in the guise of radio theater, mixing music and sound effects into presentations that thrillingly veer from the pedagogical to the personal. And if you listen to Radiolab via podcast, then along with the shows come the Everynone videos, appearing every couple of months on your iPod and relating to specific Radiolab programs. This May, for example, was Symmetry, which in just under three minutes of split screen images asks, “Is the world full of deep symmetries and ordered pairs? Or do we live in a lopsided universe?”

Hoffman, Mercadante and Metoyer III met in Boston while attending college and banded together as Everynone in 2008, believing that “three experiences are more potent than one.” According to their mission statement, “Everynone works primarily with non-actors to capture life as it is, carefully framed and distilled. Their mission is to uncover the beauty in the mundane and everyday; to band the emotion and aesthetic around one simple core idea. They play with the lines between documentary, fiction and experimental cinema to craft films that focus on concepts and feelings above all else.” Along with online, the trio’s films screen at art galleries, including the Guggenheim’s YouTube Play Biennial this past October.

But next year Everynone may reach larger screens. The group is working on its first feature, Everyday, to be produced by Mindy Goldberg and Anne Carey of their commercial company, Epoch Films. Writes Mercadante in an e-mail, “Simply put, the film will be an observation of the beauty of everyday people, places, things, actions, feelings, etc… For now, the string that will tie everything together with Everyday will be time. A thought we continually fall back to is how, at any given moment, two dramatically different but densely pure and beautiful things can be happening… 92-year-old Joe slowly puts his pants on in New Jersey, while 7-year-old Tina is practicing her violin in Nebraska. So simple, but in the right frame, under the right architecture, completely beautiful.”

Of course, such a feature concept could be too simple, even cloying, but the precision of the filmmakers’ images, the deftness of their editing and the moments of surprise contained in their short films suggest the full-length film will have unexpected dimensions. Furthermore, the group is aware that they’ll have to adapt their style for the feature format. “Our short work is generally pretty quickly paced, and rightfully so,” writes Mercadante. “There’s only so much brainpower one’s mind can put towards playing with a concept in a film… With the feature, we can open the ins and outs and we can slow things down. This ought to be the most refreshing and demanding part of the rhythmic process for us.” After explaining the feature in greater detail, Mercadante concludes, “I’m aware that it may seem fairly vague, but that’s the best part of this whole process. You need a basic concept—a decent list, strong hands and sensibilities, patience, anxiety, a camera and/or mic—and it comes together for you.” — Scott Macaulay

Symmetry from Everynone on Vimeo.