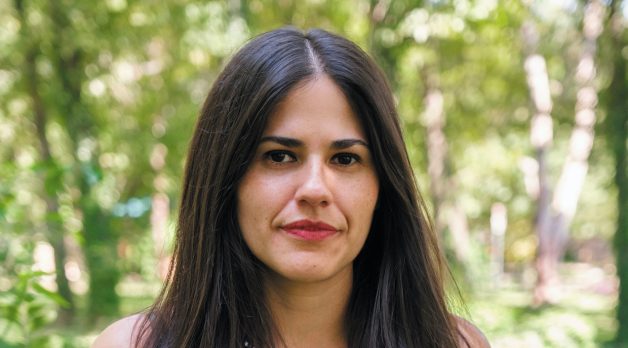 For 20 years, Iliana Sosa’s grandfather Julián took a monthly trip from the Mexican city of Durango across the border to visit family in El Paso, Texas, and Albuquerque, New Mexico. He’d previously traveled to the United States as part of the Bracero program, started by the U.S. government in 1942 to contract Mexican farm workers to fill in during World War II’s labor shortage. “I grew up with an image of him coming every month with his cowboy hat,” Sosa recalls, but “didn’t really know him. This allowed me to get closer. Some of the best moments of my life have been filming him.”

Sosa began shooting Lo que dejamos atras (What We Leave Behind) in 2014, when Julián was 84 and still working as a farmer planting chili peppers and corn. The plan was to make an oral history of Julián’s memories of his Bracero days, but the film evolved into a patient, rigorously captured portrait of his final years. In the opening scenes, Julián makes his trip to the States as usual and Sosa tags along, but the journey leaves him feeling weak. This, it turns out, will be his last such visit: “I never thought I would film until the end of his life,” Sosa says. Capturing Julián’s daily routine, attempts to build a house he can leave behind for his family and frequent Tecate breaks in between, Lo que dejamos atras has a strong compositional sense and affinity for slow cinema rhythms that, Sosa says, are intended to capture the pace of life in Durango, which “feels so different from life in the U.S.” That style “developed as a result of this film”; when looking at footage from 2014, she notices that she “moved around so much. I was not confident, I was really apprehensive.” Serious financial support didn’t arrive until a few years ago. The project has received grant support from the Ford Foundation and participated in the Sundance Institute Development Fellowship, among other programs.

A first-generation Mexican-American who grew up in El Paso, Sosa never thought “being a director was something that could really be sustainable, economically. How many Latina directors are actually out there and making films? Very few, especially in fiction.” While completing a major in Latin American studies at Southwestern University, Sosa took a class taught by the late Daniel Castro on Latin American cinema. Seeing films like Héctor Babenco’s Pixote and Walter Salles’s Central Station was “a pivotal moment” that “opened up my eyes to a different form of storytelling.” Castro encouraged Sosa to apply to film school. “I was writing a lot of essays on Latina identity and what it meant to grow up on the border,” Sosa recalls. “And I thought, ’Who’s going to read all these essays?’ So, I started exploring film as a possible medium.” After completing an MFA in directing at UCLA, Sosa was approached by Real Women Have Curves playwright Josefina López to direct her first feature, Detained in the Desert, an adaptation of her play the writer self-financed.

Interested in working in both fiction and nonfiction, Sosa is completing editing on Lo que dejamos atras with the aim of a late 2021 or 2022 premiere: “These themes of grief and loss, I think, would really resonate with people in person,” she notes. She’s also in early development on an omnibus feature fiction project codirected with other Latina filmmakers from Texas. “I think we’re processing as first-generation filmmakers,” she says. “It’s a process of healing, and I think through films we can do that. People now have more access and are like ’I want to do this, too. I can, and why not?’”—VR/photo by Moyo Oyelola