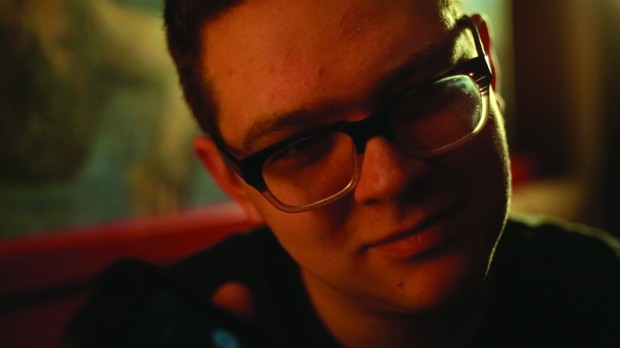 Mordantly honest and guiltily hilarious, the short film Serenity is Chicago-born, New York-based filmmaker Jack Dunphy’s animated retelling of the loss of his virginity. But despite the familiarity of this autobiographical genre, you’ve never seen, or heard, a recounting much like Dunphy’s. After summoning up the courage to approach the uber-cool Serenity O’Connor, who sullenly smokes cigarettes alone outside school every day, Dunphy finds himself being ravaged on her couch while Faces of Death plays on the VHS across the room. Afterwards, instead of a cigarette, she shoots up.

The days go by, and Dunphy and Serenity’s thing becomes a thing. “It was pretty much just rough sex and watching her do heroin; that was the blurry routine of it,” Dunphy says in his draw-you-in South Side accent. And all of that occurs in just over one minute of Serenity’s five-and-half-minute running time. The remaining four minutes and change are a delicately profane, beautifully realized miniature of melancholic heartbreak and unexpected personal discovery only deepened by the charmingly crude aesthetic of Dunphy’s animation.

Serenity has been a hit on the festival circuit, screening at Sundance, Rooftop and the Nashville Film Festival, among others, but the short got its start in Caveh Zahedi’s class at the New School, from which Dunphy recently graduated. After studying undergrad — and being “a total fuck-up” — at Columbia College in Chicago, Dunphy decided he had to “get his act together and move to New York” to make movies. Enrolling in a class, Personal Documentary taught by Zahedi, Dunphy described himself as star-struck as soon as the director walked into the room. He hadn’t realized that his teacher was the director of I Am a Sex Addict, which, he says, he became fascinated by after stealing it from a Blockbuster video store in eighth grade. “‘Just be honest — that’s the secret trick,’” is the advice Dunphy remembers Zahedi giving. So, when the class assignment was to make a film “about something you’re ashamed of,” Dunphy remembered Serenity O’Connor. “I was ashamed of the fact that I had broken up with her after she went through withdrawal,” he says. “It takes you five years to emotionally process something, and I finally realized what that experience meant to me. I really felt like I was discovering my sensibility, getting in touch with myself when I was making that film. As I was drawing the characters, I was remembering those people and those feelings.”

Dunphy’s relationship with Zahedi has gone from professor/student to professional. They are collaborating on a Web series, Awkward Celebrity Encounters with Caveh Zahedi, in which Dunphy is animating the mostly hostile run-ins the director has had with various famous people over the years. Stemming from another Zahedi New School Class, Contemporary Independent Cinema, Dunphy is also collaborating with independent auteur Nathan Silver. “His film Soft in the Head blew my mind,” Dunphy says. Zahedi invited Silver to his class one day, and he came in wearing a scarf. “That guy’s an asshole,” Dunphy remembers thinking. “Then he started speaking, and I realized he wasn’t an asshole. I went up afterwards and said, ‘I’d love to work with you.’” Future conversations led to Dunphy writing the story outline for Silver’s rehab drama, Stinking Heaven. Says Dunphy, “I knew heroin addicts and dated a couple of them, so maybe he thought I had some inside knowledge.”

Dunphy was set to begin his first feature in Chicago — “a half-doc, half-narrative thing about filming me and my girlfriend and these other real couples” — but shortly after returning home, his father had a stroke and, as of this writing, is in hospice care. “So I’ve postponed that other film and am working now on a doc about my dad’s death — gnarly hospital stuff. My family hates me for doing it, but I’m making them understand that this is how I’m dealing. My mom’s a filmmaker, too, and I’ve learned a lot from her; she’s the most understanding of me filming. But the night he had his stroke, I was running around filming, and I’m just now getting her to forgive me.” — S.M./Photo by Alex Girav