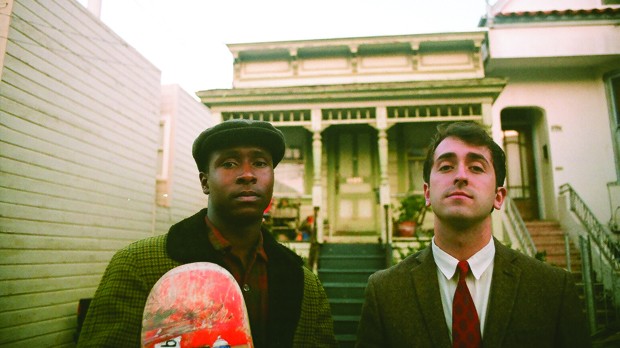 The lack of affordable housing; the displacement of natives by incoming, high-paid computer engineers; and the dearth of people of color in the city’s booming tech sector — all are fiercely relevant San Francisco stories. Against that backdrop, then, it’s not surprising that one young filmmaker and composer, and one young writer and actor, have captured attention with their as-yet-to-be-shot first feature, The Last Black Man in San Francisco. A stunning trailer, impressive website, successful Kickstarter campaign (almost 1,500 contributors totaling nearly $80,000) and scads of local press, all in the last few months, have registered Joe Talbot and Jimmie Fails as artists with their fingers on the pulse.

The Last Black Man in San Francisco is a doc-fiction hybrid, containing plot beats taken from Fails’s own life, as well as that of other characters who are contributing to the screenplay. The main storyline involves Fails’s character trying to buy back his family’s ancestral home in the Fillmore district. But, Fails says, the structure is loose. “It’s this random ode to the city, full of little stuff that everyday San Francisco [residents] go through. We know how it’s all changed — the good and the bad of it.”

Talbot and Fails have been friends for over a decade. “I was 10 or 11 when we met,” Fails says. “I lived in the projects in Presidio Park, and I ran into Joe when he was having his first fist fight. He was always around, doing creative stuff and having people over to his house recording music.” Asked to name a favorite actor and movie, Fails reaches back, citing Marlon Brando and A Streetcar Named Desire. Talbot also locates his sensibilities in the past. “I’m stuck in an era I didn’t live through,” he laughs. “I grew up in a family which honored Old Hollywood. My grandfather, Lyle Talbot, was a leading man in the pre-code era but was washed up by the ’50s when he started working with Ed Wood and appeared in Plan 9 from Outer Space.”

Talbot’s delicately haunting compositions, which bring enormous personality to the Kickstarter trailer, too seem torn from another era. He says, “I started writing music for this film before even envisioning the world on camera. I don’t want to make a gritty urban realism drama; I want a different tone and a romantic feeling. So, I’ll write a melody on piano, and then isolate [and sample] a violin note from an old 78. It’s a strange and tedious process.”

The Last Black Man in San Francisco is scheduled to shoot in December, with the team now workshopping the script and completing fundraising — a task that’s easier given Fails’s current status as something of a local celebrity. Talbot recalls a recent meeting, when the two were approached by a man who told them, “I feel like I’m the last black guy in tech. Your story resonated with me, even though I’m participating in gentrification.” Adds Talbot, “And he’s now become a friend to the film. We’re not making a preachy film, or a film to vilify the tech industry. We’re trying to hit a global feeling.” — S.M./Photo by Nat Talbot