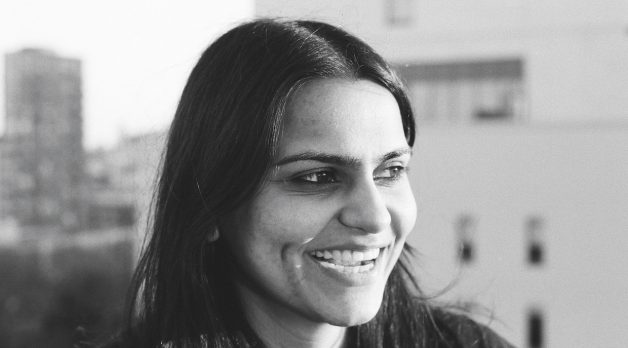 In September, Karishma Dube was developing some projects in Los Angeles. It had been months since she’d been back to New York, where she currently lives, and three years since she’d been back home to New Delhi, where she grew up. After attending boarding school from the age of 10 to 18, she “wanted to be alone for a while and in uncomfortable situations.” She got into a school in Bombay, which was not too far but “far enough” from everyone and everything she knew. Through her sister, the cinematographer Shreya Dev Dube (Cat Sticks, Achcham Madam Naanam Payirppu), she was exposed to the filmmaking community: “I was struck by how seriously they would take everything. Their hunger and constant striving was fascinating, even though at the time, I couldn’t quite understand it.” Later, she assisted on some films, such as Shalini Kantayya’s Catching the Sun, and decided to try filmmaking for herself, which would take her to new places and uncomfortable situations.

Dube moved to Manhattan with a full ride to the graduate film program at NYU and directed her first short with dialogue, Pia, about a single mother who pressures her daughter to attend Durga Purja and wear an unfitting, traditional dress. “I grew up with a lot of private body image issues, and I felt that I needed to speak about something that felt uncomfortable for me to talk about,” Dube says. She learned that she enjoyed working through these vulnerable conversations with first-time performers—in this case, her aunt, who played the mother. Both characters were written as though they had grown up in India. “I was too scared to do anything I didn’t have any emotional parity with,” Dube says. “I was realizing I couldn’t speak to an Indian American voice. My immigrant experience had barely started, and I felt that I couldn’t speak for them.”

She shot her second short, Devi (Goddess), inside her childhood home in New Delhi. “I questioned a lot of things I had normalized back in India,” she says. “Caste identity politics were something I, embarrassingly enough, understood when I was pushed into some version of it in America.” Telling the story of a closeted queer woman who decides to pursue her attraction to her family’s maid despite the social boundaries, Dube returned home to challenge those systemic codes. “I think I enjoy realizing that I can only speak for people that stem from my own culture,” Dube says, “but I also want to try to travel to experiences that are not mine, embedding myself into a community and understanding how to portray them.”

For Bittu, her most recent short, which was shortlisted for the 93rd Academy Awards, Dube traveled the villages outside the city of Dehradun to tell the true story of the accidental school poisoning that took the lives of 23 children at a school in Bihar in 2013. It took her two and a half years to raise the funds to shoot the film. After struggling with grants, Dube raised around $14,000 through a Kickstarter campaign and finally received the rest of the budget from a new in-house NYU grant from the Black Family Foundation—enough to give her rehearsal time with her first-time performers, who were mostly children, and bond with their families and the rest of the people in the village. Returning to New York after becoming so intensely embedded in their community, she felt depressed and disconnected from the experience, so far away again from a new place she called home. But in due time, she finished Bittu, which went on to receive praise, and found new places to artistically dwell. “I feel very lucky to be at a place and a time, where, being Indian, I can still pitch deeply personal stories in America, stories that live between my two homes.” Dube says.— Aaron Hunt