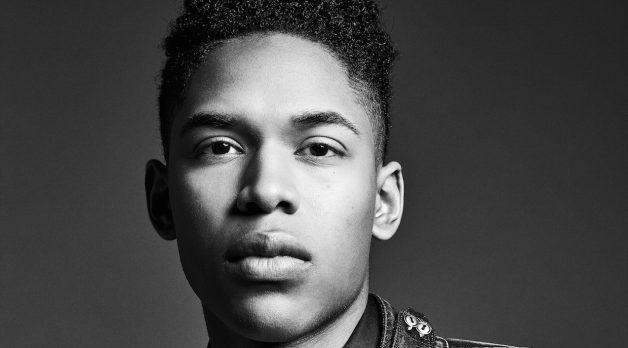 Kelvin Harrison Jr. uses “that putty stuff” from glow-in-the-dark star galaxy packs to hang index cards on the walls of his bedroom. He’ll write out the emotional journey of his character, notes about the movie’s theme or chronology, questions about the person he’s developing and details he’s inventing. “Questions free me up to play,” the 23-year-old actor says.

Born in New Orleans, the younger Harrison is the son of a classically trained saxophonist and a jazz vocalist. His parents encouraged him to study music at Loyola University New Orleans, but Harrison, who played trumpet and piano on Sundays in church, didn’t think he had the talent. He studied studio engineering instead. “Music, especially jazz, is a lot about emotion and expression,” he says, “but it’s also a very intellectual art form, which felt a little outside for me. I like to feel a little bit more.”

Having performed in high school musicals, Harrison considered acting a hobby. After dropping out of Loyola to study filmmaking at the University of New Orleans, he auditioned to be an extra on a local shoot, Gavin Hood’s 2013 Ender’s Game, and, distinguishing himself from the pool of extras, was promoted. “How many times do you find yourself on a film set with Viola Davis and Ben Kingsley?” After the shoot, Harrison registered for an acting class and then landed a role in Steve McQueen’s 12 Years a Slave. More recently, he signed with WME.

“Acting has become an easy way to express myself,” he says, remembering the two-hour rendition of Sleeping Beauty he once performed in as a kid. He’s always wanted to play Maleficent, he says, and Angelina Jolie’s character in Girl, Interrupted, too. This year, he played his first leading role in Trey Edward Shults’s sophomore feature, It Comes at Night. Opposite actors like Joel Edgerton and Chris Abbott, Harrison meshed beautifully with the ensemble, bringing an emotional intelligence to the part of a gentle young man violently coming of age.

“We felt so close as artists,” Harrison says of Shults. “It felt like working with a best friend or an older brother.” He’ll appear on screen next in Dee Rees’s Mudbound and just wrapped Anthony Mandler’s Monster, playing an teenager (and aspiring filmmaker) charged with murder and incarcerated at a New York juvenile detention center. Harrison is also the male lead in Jinn, by fellow 25 New Face Nijla Mu’min. Up next are Sam Levinson’s Assassination Nation and Justin Kelly’s JT Leroy with Laura Dern and Kristen Stewart.

Harrison imagines trying his hand behind the camera, potentially working in development or making short films. With a friend, he once made a short for $15,000 that “came out really bad” and doesn’t think he’ll direct again. Ever since giving up jazz, he’s embraced acting as his art. “It feels like the right medium for me.”

For the future, Harrison hopes to work with a list of actors and directors he greatly admires, including Gregg Araki, Tilda Swinton and Lynne Ramsay. Potentially in the next five years, he’ll have found six months to resume the college degree he left with one semester outstanding. Perhaps he’ll return to his roots and play more piano. And even though he just moved to L.A. several months ago, “I might even move back home to New Orleans…who’s to say?” — TH