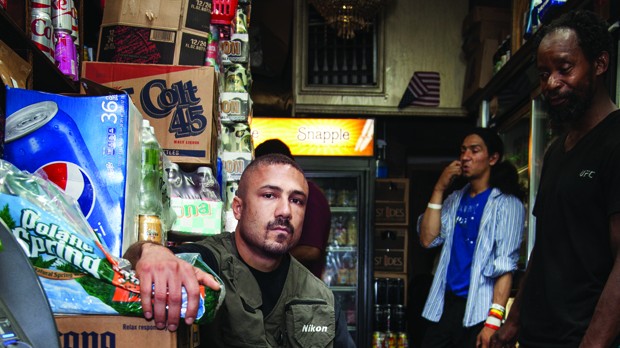 It’s been a big year for street photographer Khalik Allah, whose second feature Field Niggas has found a healthy life on the festival circuit. Like Allah’s previous shorts, the film was originally available for free online, but was pulled by programmer request when Field Niggas was programmed at this year’s True/False Film Festival. He’s yet to put it back online, a decision that’s helped his film travel more than any of his previous work. He’s been accompanying the film on both the university circuit and to festivals, and his July screenings at FIDMarseille marked his first trip to Europe.

Allah’s 2010 first feature, Popa Wu, was his attempt to make a “normal, talking heads documentary” about Wu-Tang Clan’s de facto spiritual advisor: “The reception was great, but only within the realm of hip-hop and Five Percenters,” he notes. (Allah is a member of the Five Percent Nation, as are the Wu-Tang.) “It was a four-year project, and I was just tired of working on that film. I said, ‘I still want to create, but in a fraction of a second.’ That’s when photography came into my life.” His street photographs taken around 125th and Park Avenue — color-saturated, unblinkingly head-on portraits of the most dispossessed and strung-out people on the block — soon started attracting attention online.

In Allah’s early shorts (Urban Rashomon, Khamaica), he’s seen shooting others on the streets of Harlem and Jamaica (where he has family), with the resulting photos shown onscreen. In Field Niggas, he’s one with the camera, the POV always his from behind the lens, with subjective, super slo-mo images replacing stills and other perspectives altogether. Allah was originally going to shoot a feature with one of his short subjects, Frenchie, “a 53-year-old schizophrenic, bipolar Haitian man.” He explains, “Me and him became real tight throughout my process of shooting on Lexington. Then he went missing. It was revealed to me that he passed away recently.” Building on the structure of Khamaica’s street group chorus, the results are vital reportage delivered through a thickly impressionistic nighttime lens. The film’s urgency has only increased as Allah’s continued touring with it: “I went to Baltimore. Right in the mix of all of that crazy police brutality and crazy wild shit, Field Niggas was there. It was serendipity to the maximum.”

During his travels, Allah was approached by a Sundance consultant who wondered if he would be interested in the Screenwriting labs. “I’m basically preparing to take the last three years of my life that have happened on 125th and Lex and turn that into a fiction piece,” Allah says. “But between the time that I could get that accomplished, I want to do another documentary. And it will probably be a documentary that takes place in Jamaica, similar to Field Niggas, just the hoods of Jamaica with all of the words of the people that most will avoid out of fear. And I don’t care if it’s redundant,” he says, laughing. — V.R./Photo by Richard Koek