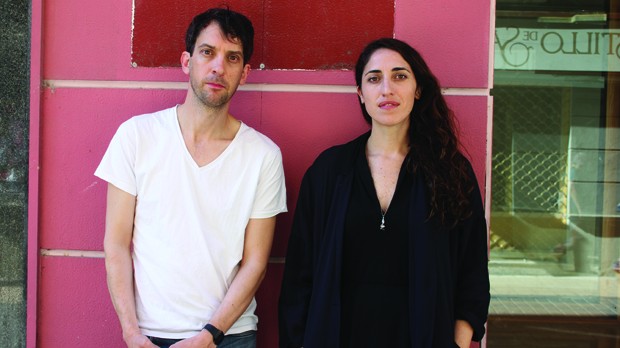 Paintings whose meaning can’t be explicated other than contextually; sculptures that don’t make sense; sketches created with matchsticks on toilet paper that have somehow survived: Pia Borg and Edward Lawrenson’s Abandoned Goods memorializes and curates the 5,000 artworks produced by the inmates of London’s Netherne Hospital between 1946 and 1981. The artworks are shot on 16mm and 35mm, a medium confirmed by the odd bit of flaring out, contrasting sharply with the flat HD used to capture Newthorne’s present-day abandoned grounds.

The project came about as the collection was being transferred to the care of biomedical charity the Wellcome Trust at the moment when the artworks were gaining currency in the outsider art circuit; the film climaxes with their ambiguously triumphant presentation in a French gallery. The short film, which premiered at Locarno this past year, where it won the Golden Leopard for Best International Short, is simultaneously eerie and seemingly affectless in its lack of overt presentational prodding: the more you look at the art on display, the less it explains. The mentally ill were encouraged to express themselves through art, and the results were meticulously stored. “The psychiatrists were thinking of these as diagnostic tools,” Borg says, “and then that idea was thrown out the window as psychiatric practices evolved and the treatment of patients evolved. Then it was seen as therapeutic.”

Australian-born Borg is a trained animator with no primary loyalty to any particular idiom: her previous shorts encompass the hand-drawn (Through the Hawthorn), technically tricky time-lapse (Palimpsest) and stop motion (Crystal World). Lawrenson is a British former critic who left Sight & Sound in 2006 to pursue a master of arts in documentary filmmaking; his 2012 short A Thousand Trees examines a mall left in the planned Scottish community of Glenrothes, which is now nearing ghost-town territory. Like Abandoned Goods, it’s a deep dive into a formerly vital location left to slowly decay, merging voices of the recorded present and archival past with footage of a site that seems unexceptional but is pregnant with collective memory.

Abandoned Goods unites Borg’s animator training and Lawrenson’s interest in psychogeographical history. “With Pia’s background as an animator, she was able to bring a meticulous artistry to the presentation of the paintings that I would never have,” Lawrenson notes. For her part, Borg says that her past films “have always come back to the study of the uncanny and the relationship to moving image technology, the history of cinema and the way that relates to the history of psychiatry.” This first collaboration was smooth: “I think we originally thought we were going to separate the roles,” Borg says, “but with documentary, it’s helpful to have two perspectives when constructing such a labyrinth of material.” More collaborations may be in the offing; for now, Borg (who’s currently based in and teaching at CalArts) is starting work on a feature that mixes fiction and documentary, while Lawrenson is mulling over future documentary projects. — V.R./Photo by a tourist in Spain