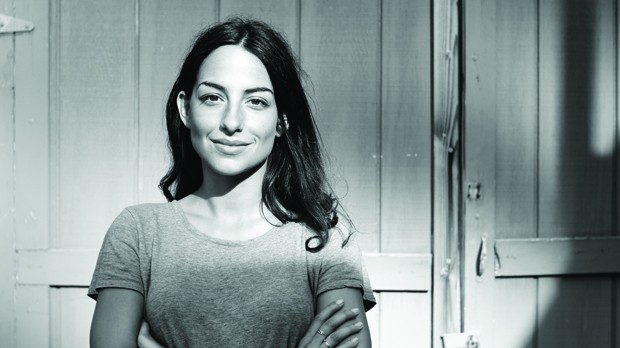 Spoiler alert: The last shot of Pippa Bianco’s film about Barbara Kruger is the best one. The four minutes that have come before in this portrait of the text-over-pictures artist have given us only Kruger’s voice but not her face. We’ve heard her speaking about her work, her exhibitions, her life, her habits, her theories. But we haven’t seen her, and we’re getting kind of frustrated — what happened, you couldn’t get Kruger to show her face? Finally, the film cuts to black, and we hear the end of a thought, about putting her work on billboards and buildings: “…it means you don’t have to be there physically. You don’t have to be the face of your work.” As the credits roll, the line hits like an arch punchline; you thought you were watching this movie, but this movie was watching you back.

Picturing Barbara Kruger played SXSW this year, as did Bianco’s fiction short, Share, supported by the AFI Directing Workshop for Women and starring Taissa Farmiga. Share is also about what you (mostly) don’t see — nearly wordless, it’s a visceral, harrowing trip through a teenage girl’s day when a horrible video, illicitly filmed the night before, leaks into the vortex of high school social media. Share won a Special Jury Prize at SXSW, and then it won the top prize of Cannes’ Official Selection in the Cinéfondation section, meaning that Bianco’s first feature will be automatically screened in Official Selection when she completes it.

Bianco’s first love was photography, especially landscapes, which she gathered on ambling road trips around the colleges she attended. “Everything I photographed was an excuse to get in the car,” she says. “It wasn’t so much about photographing the places; I was using the process of taking pictures to get to know the place.” Influences included Robert Adams, An-My Lê, and Carleton Watkins. Bianco then got into road movies, and grabbed a job casting extras on the Vera Farmiga-directed Higher Ground. Sharing a bathroom with 15 other crew members and running on three hours of sleep, she remembers thinking, “This is the life for me.”

Photography was too isolating, giving her both too much and not enough power over each image. “I was more comfortable with the distance and the impact of making films than I was with making photographs,” she says. “When you see one moment frozen in time, something ‘nonfiction,’ it’s easy to think, ‘that’s truth.’ With a narrative, it can be a clearer contract. Whatever I’m showing you, it’s a story. It’s how I see it, not how it is.” Icy, detached neorealism is not her favorite style. “I want to be able to make people feel things, rather than just think about an idea.” Next for the new resident of Los Angeles is a writing credit on Bleed for This, the upcoming boxing opus executive produced by Martin Scorsese, and a stack of new feature projects simmering in her head, plus the copious meet-and-greets that come when the “Potential Next Big Thing” spotlight lands on you. What’s happening to Bianco now is a bit like what happens in Share: One can imagine her phone tripping over itself with all the happy news and industry whispers, while she tries to ignore the noise and get back to work. — Alicia Van Couvering/Photo by Ava Berkofsky