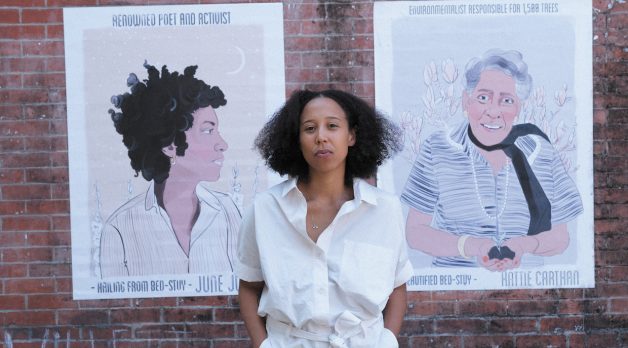 Madeleine Hunt-Ehrlich isn’t interested in convention. The 33-year-old filmmaker blends narrative and documentary elements to create surrealist interpretations of Black history and experiences—stories underrepresented in the Western film canon despite the continuous presence of Black filmmakers since cinema’s inception. “The thing that film needs to ask itself is if it’s interested in continuing to evolve,” says Hunt-Ehrlich. “If it doesn’t grow, it’s going to be left behind.”

Whether or not the broader cinematic landscape is ready to change, Hunt-Ehrlich is honing her own distinctive approach to the dramatization of Black stories, one that values opacity and abstraction over linear narrative. “The fragment is a really important structure for telling stories that have been heavily impacted by colonialism,” she says. “For so long, value has been placed on a story that you can tell from beginning to end. For many marginalized folks, this is impossible due to trauma or lost history.”

Particularly in her 2019 short film Spit on the Broom, Hunt-Ehrlich uses richly staged, artful imagery to tell the history of the United Order of Tents—the oldest African American women’s group in the United States, established by freed slaves in 1867. While the film remains grounded in the Tent’s sprawling story through narration drawn from archival public records, Hunt-Ehrlich carefully guards their secretive history via surreal shots of hungry wolves and gorgeous dance sequences, presenting the colonial gaze as overtly cannibalistic (and voraciously so). “Western film narratives often defang a movement through exposure,” she says. “A really exciting question to me is, ’How do we tell stories without giving away their power?’”

For Hunt-Ehrlich, this power is primarily preserved through genuine connections. She originally met the Tents while working with artist Simone Leigh, recording oral histories and collaborating alongside a collective of women hailing from Brooklyn to South Carolina. The project is still in the midst of a multiyear archival effort in conjunction with the Smithsonian. “So much of what I have learned about the world comes through spending time with people,” says Hunt-Ehrlich.

Currently, the filmmaker is in the process of developing her first feature, a scripted film about Suzanne Césaire, a surrealist French writer (and the wife of poet and politician Aimé Césaire) from Martinique, who Hunt-Ehrlich views as the “foremother of Négritude, Pan-Africanism and the Black Power movement.” The project was recently selected by and, at press time, is being developed at the Biennale College-Cinema, a program organized by La Biennale di Venezia since 2012. “We’ve been talking about her ideas this whole time, I want to bring her name back into the conversations we have about them,” she says. Her research for the feature involved forging a relationship with Césaire’s descendants in Martinique and Paris, through whom she uncovered a wealth of information about Césaire that would otherwise be lost to time. This is ultimately the essence of Hunt-Ehrlich’s filmmaking practice: “I’d rather come sit with you, get to know you and share a meal with you.”—NK/photo by Dominick Lewis