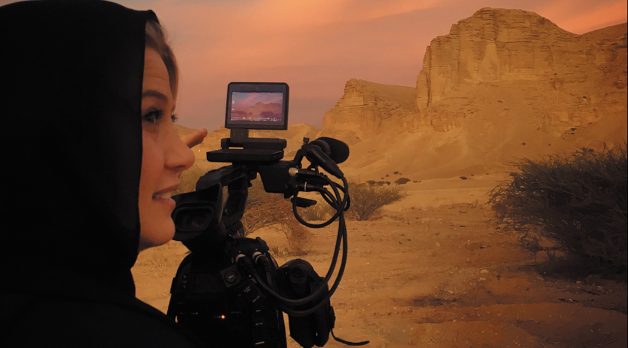 Meg Smaker traces the motivation for Untitled Terrorist Rehabilitation Film, currently in post, to three events. The first was 9/11, when she worked as a firefighter: “I loved firefighting, and thought I’d always be one, and then 9/11 happened. I saw my firehouse go from a place of love and support to a place of hatred, bigotry and fear. And nothing that was being presented on mainstream media answered any of the questions generated from that day.” Wanting to better understand, Smaker travelled to Afghanistan six months later “and was immediately humbled by my own ignorance of the world. Everything I gleaned from mainstream media clashed with what I experienced in Afghanistan firsthand.”

The second event occurred in 2003, when her travels took her to Colombia, where she was kidnapped and held for just under two weeks by the right-wing paramilitary group, United Self-Defense Forces of Colombia (the AUC). “Being kidnapped is not like the movies,” she says (although her abduction did become an episode of National Geographic’s Locked Up Abroad series). “There aren’t explosions and men dressed in black going on long diatribes. With no access to Internet or forms of distraction, you sit around and talk to your fellow captees, and eventually you talk to your captors. As we talked, I began to feel more unnerved. Not from the deeds they had just done, but from how normal they all were. Far from the blood-thirsty psychopaths I’d imagined, these were just your run-of-the-mill young men and women. It was quite unnerving.” (Her kidnappers killed seven of her traveling companions and burned down two neighboring villages.)

The third event was when Smaker moved to Yemen to study Arabic and Islam. There she became the head fire instructor at an academy. Around 2006, she heard of a terrorist rehabilitation center in Saudi Arabia, the Centre for Counselling and Care, and “thought it was really interesting that Saudi Arabia, which is perceived as being very anti-human rights, very conservative, had a seemingly progressive rebab program.”

Shortly thereafter, Smaker moved back to the States to become a documentary filmmaker, earning an MFA at Stanford University’s documentary film and video program. She made several shorts, including one on Cuba’s first female boxer, Boxeadora, which won best short doc at SXSW and a student Academy Award. In 2017, she embarked on the current project, her first feature. In a statement about the film, Smaker writes, “This is the story of a group of men who were released from Guantanamo and put through the world’s first terrorist rehabilitation center, located in Saudi Arabia. On its surface, you can say that the film is about finding an answer to the question, ’Is it possible to reform someone who has been radicalized?’ But at its core, it is a character-driven film that seeks to understand these men on a more human level, as we follow them over a three-year journey—through the yearlong de-radicalization program, and their subsequent release back into society as they try to find jobs, start families and resist the lure of their former trade.”

It took a year for Smaker to gain access, but she eventually did, after which “about 85% of my job during those three years of production was just maintaining that access. When people find out that I used to be a firefighter, their first response is surprise because they assume the two professions have nothing in common. But nothing could be further from the truth, because the skill set needed for both is the same: empathy and high stakes, fast-paced problem solving. When I was making this film in Saudi Arabia, I used that same skill set I had as a firefighter to navigate the constantly changing political landscape in order to maintain access to continue filming.”

Smaker is in the final stages of post before she’ll begin submitting her film to festivals. The film’s approach of moral ambiguity, she says, allows the viewer to make up their own mind. Smaker says that her subjects ultimately land “in very different places that are very complicated. And there are no clear-cut answers—because ultimately that’s just how real life is.” In closing, Smaker references a Dostoevsky quote in trying to explain her film, “Nothing is easier than to denounce the evildoer; nothing is more difficult then to understand him.” Her film, she says, “is trying to do that difficult thing—to understand ’the other.’”— SM