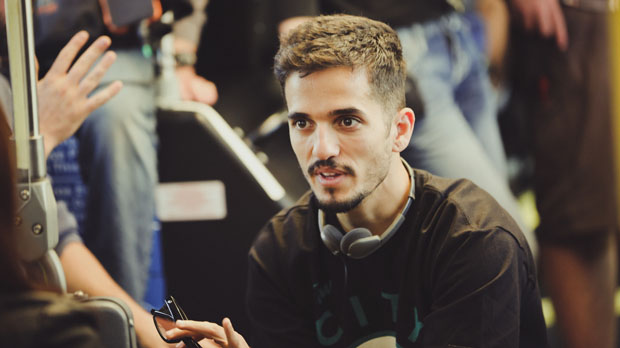 Born in Tehran, Mohammad Gorjestani moved to the states in 1988 when he was four and attended Cupertino High School in California. “Apple was right across the street,” he says, “but I grew up in a poor neighborhood. We barely got by.”

Now, Gorjestani runs his own Bay Area commercial production house, MKSHFT, and in January he debuted a 30-minute short, Refuge, for ITVS’ Futurestates series. In the spring he launched an app for Esquire magazine through a software start-up he co-founded, Volio. And next year, he hopes, there will be his first feature, Somehow These Days Will Be Missed, for which he’s received a San Francisco Film Society KRF Filmmaking Grant.

Set in 2020, in the aftermath of an Iranian cyberattack on the U.S., the coolly dramatized and strikingly composed Refuge imagines Iranian immigrants being summarily deported, unless they’ll take part in biotech experiments for the American military. “I wanted to do a portrait of a character who is very ordinary, and how she could be affected by a geopolitical situation,” Gorjestani says. “History finds new ways to repeat itself. Instead of World War II, it’s cyberwar, and instead of internment camps, it could be deportation. Fear makes society do irrational things.”

While most emerging filmmakers have vivid childhood memories of cinema, Gorjestani says, “I really didn’t go to movies very much when I was a kid.” The first film he remembers making an impact was Fernando Meirelles’ City of God. Up to that point, Gorjestani, who says he was “pretty athletic” in college, was into wrestling. “But I always had a creative side to me — I did a lot of writing, poetry, that I hid from everyone in this meathead wrestling environment I was in.” He soon discovered other movies — Amélie, Memento — until one day he remembers being in the weight room “around very aggressive type of people” and realizing “he didn’t want to be part of this [sports] culture.” So after college Gorjestani enrolled in the Vancouver Film School, a one-and-a-half-year program where, he says, he was the “kid in the class who hadn’t seen as many movies as everyone else.”

It was in his first year of film school he saw a final formative film, Abbas Kiarostami’s Taste of Cherry. “I don’t know if it was because of childhood memories, but it twisted my mind. I realized, ‘Wow, stories can be like this — less stylized, more ambiguous but, at the same time, cerebral.’” Now that he’s found a connection to Iranian cinema, Gorjestani says it’s an influence he “can’t avoid.”

“I find myself with American friends, and I listen to mostly Western music, but there’s something inside of me, a connection I have with my parents and Iranian cinema,” he says. “Writing in this modern Iranian voice has been incredible therapy for me, identity-wise.”

Gorjestani’s feature screenplay, Somehow These Days Will Be Missed, is an immigrant tale set in San Jose in 1991. But despite its Silicon Valley setting, it’s more about the new economy’s have-nots, the tale of an Iranian-immigrant data engineer who, finding his skills aren’t advanced enough for the competitive workplace, drifts into money laundering and drug trading. “I think it’s the winners who depict history and what’s on the evening news,” he says. “It’s the job of the artist to speak to reality and show the other side of the coin.” —S.M.