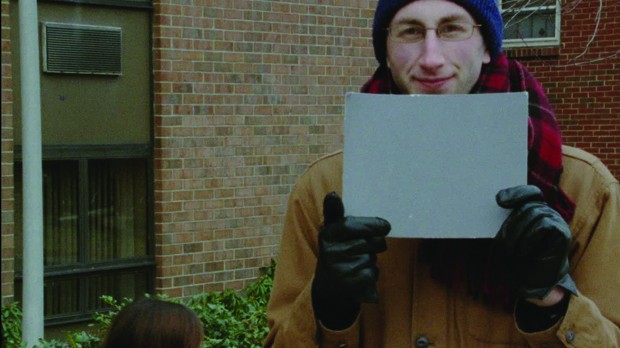 At New York University, which he attended for film production, Haddonfield, N.J., native Ted Fendt learned French (a skill that has helped partially finance his films) and met his d.p. Sage Einarsen and sound man Sean Dunn. With this regular micro-crew, Fendt has graduated from two student films he describes as “not very good but with a few interesting gags” to three increasingly strong, idiosyncratic shorts that develop a drolly anomalous voice. Broken Specs, Travel Plans and Going Out (the latter premiered at this year’s New Directors/New Films) were all shot on 16mm in Haddonfield, with Fendt’s non-actor 20-something friends, and all string together mundane day-to-day interactions — a trip to the movies, dinners with parents, awkward house parties — while building nowhere in particular. The film grain, vigorous camera movement and brisk editing create a sense of momentum and authorial authority, despite depicting lives lacking any particular direction. “There’s a point where it goes from a disorganized mess to some kind of structure that can work for me,” Fendt explains.

Working in familiar spaces with nonprofessional performers creates an off-kilter documentary feeling, not dissimilar from some of the filmmakers Fendt reveres (like French New Wave oddball Luc Moullet). The possibility of serious drama — winning a trip out of town in Travel Plans, a potential hookup in Going Out — is raised but never threatens to crest to fruition, resisting what Fendt considers a “cinema of faux-intensity” prevalent among American independent filmmakers determined to force their plots to a boiling point.

Fendt pays for the films himself with money earned from both projectionist gigs (he currently works at Lincoln Center) and moonlighting as a translator of soft-titles for French films lacking subtitles. One such gig for a Godard retro paid for the cost of making a 35mm print of Travel Plans; Fendt is a big believer in celluloid as both production and projection format. “Movies are expensive, so it’s not that crazy to me to spend a significant amount of what I earn on each one,” he explains. “The shorts each took about a year to make, from the conception and buying film stock to the end, when I was making the print. The money’s all mine, but I’m making it and then incrementally spending it over the course of a year.” The camera’s borrowed, and as for the rest of the expenses for the two- to three-day shoots: “We use two China balls to light everything, so our lighting kit probably costs $50 to buy at Home Depot. The sound guy has his own sound kit, so the only other cost besides food is film stock and processing.”

Fendt is currently working on his first feature, Short Story, which he expects to be in the same vein as his shorts but with some key differences. Each scene will only be one shot, and he gleefully anticipates some jarring edits resulting from the camera being at one height in one scene then cutting to a significantly different height while remaining in the same space. Fendt also expects the film to be unfriendly for festivals and distribution at 62 minutes, which doesn’t worry him. “I’m making a $45,000 movie with my own money,” he explains. “I can just worry about making what I think is a good movie and an interesting movie. I hope it’s interesting to people, and I think it can be interesting to people.” — V.R./Photo by Sage Einarsen