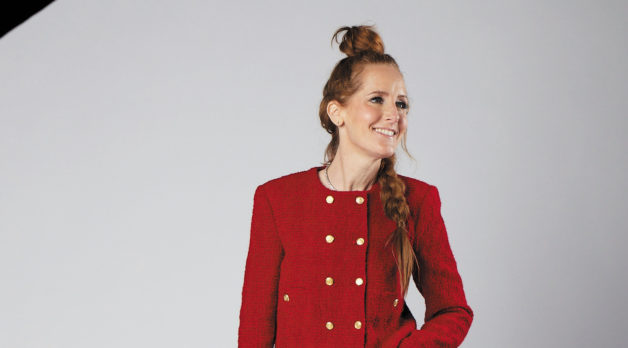 The language in Tina Satter’s Is This a Room is quotidian, banal. One sample exchange: “Do you have any pets?” “I do. I have two pets.” “Because you’ve been gone for a while, so do we need to maybe let them out and use the bathroom and stuff like that?” But as structured and placed within a conceptual frame by Satter, the dialogue—directly taken from two FBI transcripts of agents interviewing whistleblower Reality Winner at her home, as well as a phone call from Winner to her sister on a recorded jailhouse line—surgically reveals gendered power dynamics as well as an implicit critique of the security state in this age of disinformation. (Winner, an NSA translator, was convicted of leaking classified information about Russian interference in the U.S. election to The Intercept and spent nearly three years in prison before being released to a transitional facility; she is now under home confinement.) Says Satter, a playwright making her feature debut with this Is This a Room adaptation, “I stumbled across the transcript in 2017, and as soon as I read it, I [thought], this is like a thriller—a play or movie I’d be interested in. It’s about a girl wearing jean shorts in her own house, and she’s not going to get raped or die, but she’s going to go intellectually head to head with a bunch of dudes—the FBI.”

Satter continues, “I’m interested in government lingo and the procedural intensity of the transcript that they are enacting in the form of an interrogation of this 25-year-old who, on the one hand, is a very basic American young woman. But then she has her own box of amazing, which is who she is as a human. Those meet within the extremely tight frame of this hour-and-a-half when her life is cracking open.”

Is This a Room began its life as a play, premiering in 2019 at New York’s The Kitchen before an international tour, move to Off-Broadway and 2021 Broadway run that the New York Times called “astonishing—and astonishingly emotional—theater.” Satter dubbed directing the play “conducting energy in live time. It’s very old-fashioned theater—it’s a long-form conversation. The [actors] step onto the platform, it starts and it goes. The actors wore realistic costumes, but that’s the only literalizing we did.”

Film has offered Satter a greatly expanded palette and a chance to be both more realistic and creatively ambitious, an opportunity she has embraced through visual effects, text from the transcript appearing on screen and bits of archival footage. “I’ve always been interested in the actual details of that day, the ephemera of Reality’s actual life, and [in film] we can move in time through the space of her lawn and her house,” says Satter. “We can activate the actual transcript, and you can see parts of [Reality’s] heart and emotional map visualized.” Then there’s the power of the close-up. In the film, which stars Euphoria’s Sidney Sweeney as Winner, “you can really see Reality’s face quiver. If you sat in the first row of the theater, you could see this, but here you can watch, up close, this person as she realizes that her autonomy is slipping away.”

Satter attended Maine’s Bowdoin College, where she studied English but was primarily interested in field hockey, imagining she would go on to coach the sport. But public relations work followed graduation, along with a move to Portland, Ore., where she took acting classes and was cast in a production of Blood Wedding mounted by the Imago Theatre. Through them, she learned about New York theater avant-gardists, such as the Wooster Group, Richard Foreman and Richard Maxwell—she cites the latter as one her biggest mentors. She went on to study playwriting at Reed and Brooklyn Colleges, with Mac Wellman at the latter, and “immediately started making plays.”

Interviewed via Zoom while in post-production, Satter takes a moment to reflect, saying, “It still blows my mind when we watch sections [of the cut] that this is all the transcript. You can mold a whole movie from this administrative document.” Perhaps that’s because the prosaic nature of much of the dialogue serves to reveal the actual drama. “They are all performing that day. It’s this meta thing—[Reality] is totally performing, trying to talk around what she did, and the FBI are totally performing, too. I talked to one FBI agent, a woman, when we were doing prep, and she said, ‘These kinds of visits, yes, it’s 100 percent acting.’”—SM/photo by Chelcie Parry