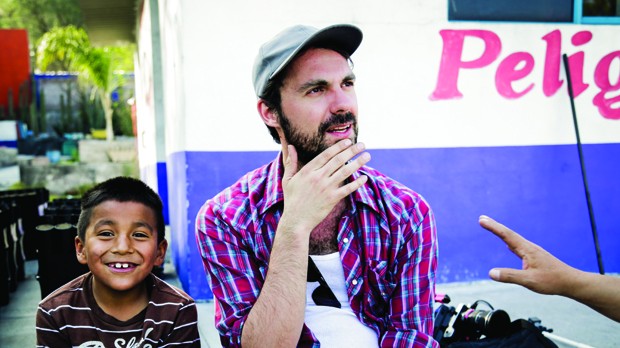 Since 1989, the Mexico City suburb of Tultepec has celebrated the region’s centuries-old fireworks proficiency with an annual nine-day event. The mildly alarming English-language label “National Pyrotechnic Festival” only begins to suggest the palpably dangerous footage captured by Viktor Jakovleski in ¡Brimstone and Glory!, which will be the Court 13 collective’s first official feature following Beasts of the Southern Wild. Vivid mayhem — crowds running recklessly through on-the-ground detonations, huge papier-mache-and-wire bulls festooned with fireworks, a GoPro strapped to the head of someone clambering up and down an alarmingly huge “castillo” (castle) to strew it with fireworks — alternates with extreme slo-mo shots of fireworks exploding. Jakovleski’s use of the Phantom camera precludes the possibility of cliché: the explosions are abstracted and unpredictable rather than prefab “lyrical,” hypnotic in their seemingly numberless permutations.

Born in West Berlin in 1983 to a Macedonian father and Serbian mother, Jakovleski went to the German Film and Television Academy but also learned about film production from inside the Hollywood machine, serving as George Clooney’s personal assistant and driving vehicles on films like Hanna. On one such job, fellow crewmember Ray Tintori told him about Benh Zeitlin, who invited Jakovleski to meet him in Park City when his short Egg played at Slamdance in 2005. “He told me about his ideas for Court 13, and we exchanged ideas about how we wanted to make movies with friends outside of the system,” Jakovleski recalls. “That was really inspiring and gave me hope that outside of Germany I’d have my own little group of people to make films with.”

Jakovleski co-produced/a.d.’d Zeitlin’s short Glory at Sea, made a couple of music videos and, with his sister, produced Florian Gaag’s forthcoming German drama about teen bullying on the Internet, LenaLove, before stumbling onto his debut feature subject. At an art event in 2012, a stranger (the artist Harald Hermann) suddenly started talking about the festival: “Sparks, giant-ass bulls — he was just going on and on. I didn’t know what he was talking about, but it was definitely something that he was fired up about. I immediately went home and started research and found all these crazy images.” Originally Jakovleski was set to produce the film for Zeitlin as his follow-up to Beasts of the Southern Wild (“I know how much he loves fireworks in like literally every single film”), but the more enthused he got about the research, the clearer it became they should switch roles. After pulling financing together, an initial shoot took place in 2014, and the resulting footage was strong enough for the producers to bring in editor Affonso Gonçalves (True Detective) and justify another round of shooting earlier this year.

With LenaLove coming out in Germany later this year, Jakovleski is turning his full attention to finishing Brimstone, which he hopes to have picture-locked by November in time for a festival launch next year. “Officially I still live in Berlin,” Jakovleski explains. “I’ve just been living outside for the last three years because of the project.” That and the bureaucratic difficulties of coordinating film financing in Germany lead Jakovleski to hope he can spend more time in the United States while retaining his Berlin base. He’s also working on “a very loose version of Alice in Wonderland that takes place in a fictitious world inspired by Berlin’s nightlife — a fiction that we want to shoot very documentary style.” — V.R./Photo by Anastasia Coyto