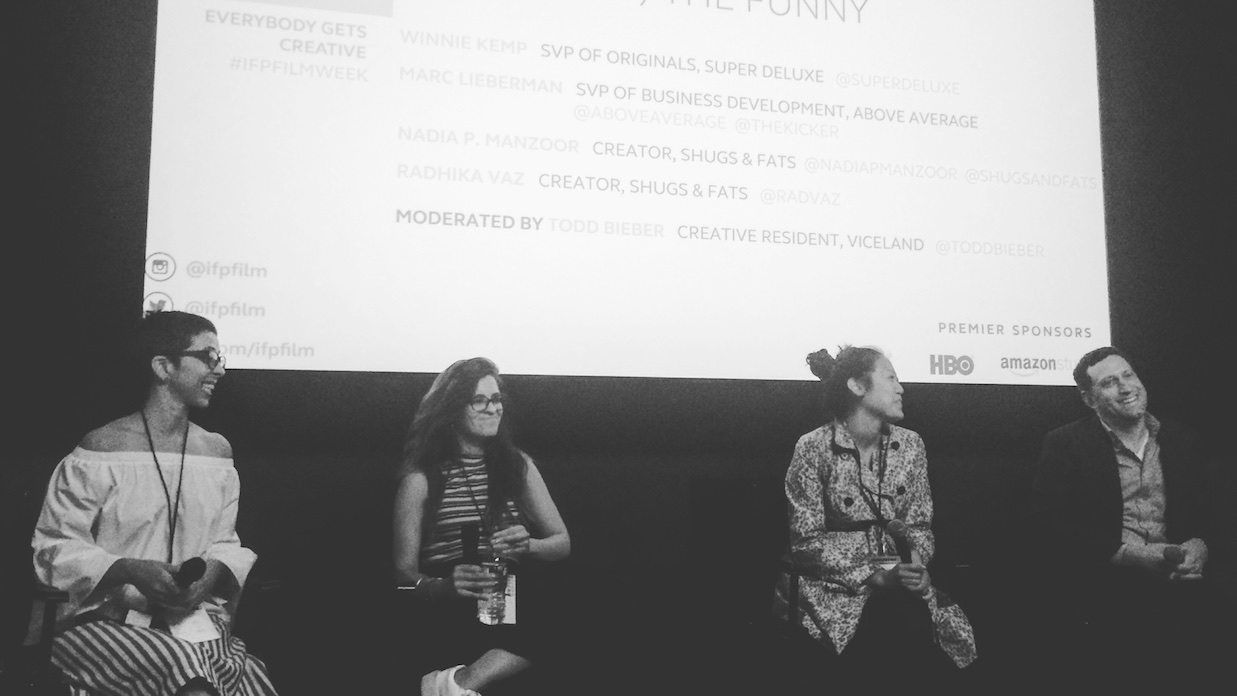 The Faces of Comedy panel at IFP Film Week.

Before IFP Film Week fades too far in our rearview mirror, we’re elaborating upon several of our snaps from our Instagram feed with further comments by the filmmakers, speakers and panelists. View all of these Instagram diaries here at the link.

“There’s a huge power today in building a following.” — Mark Lieberman, Above Average

On Monday, September 19, at “The Faces of Comedy: Platforms that Look for (and Bring) the Funny,” IFP Film Week panel it was clear that having an audience is crucial. When you find out who that audience is, well that’s another thing. And for these panelists, an audience is more than just how many hits or likes you’re getting, but from whom, too. On the panel was Radhika Vaz and Nadia P. Manzoor, creators of the show Shugs & Fats, Winnie Kemp, SVP of Originals for Super Deluxe and Mark Lieberman, SVP of Business Development for Above Average. For those of you who loathe the word “content,” I warn you — it’s used in here a lot. So, hey, maybe substitute it with “art” — whatever makes us all feel less desensitized and a bit more warm and fuzzy?

Manzoor and Vaz weren’t thinking “content” at all when they first started creating their series. Really, they just found their characters hilarious and were each other’s audience. But, after putting Shugs & Fats up on YouTube, turns out other people agreed — the two are funny. “Be prepared to be surprised,” they said. They did their own PR, sending the show to friends, tracking blogs that might write about it and focused on a “strong push for season one,” Manzoor said. Throughout the talk, both of the artists debunked the notion that if you put something up online, someone will think you’re brilliant you’ll get famous. No. Producing a piece of content is only the beginning of the work.

Super Deluxe has made a name for itself as an online video network that’s also producing original series and films. When asked what makes a creator or their work stand out, Kemp urges, ”If you have that heart inside of it, you can see that.” She also advises that it’s not always about trying to fit into the box of whatever platform you’re aiming to get showcased on. Sure, some people will tell you online content should be less that five minutes – we have no attention spans anymore! But Kemp said “however long a story takes to tell” is how long that story should be.

Lieberman is equally as eager to find new artists with unique voices for Above Average. The company was founded as an independent subsidiary of Lorne Michaels’ Broadway Video and is a place for digital content that is also continually looking for creators to feed their studio side. Like Manzoor and Vaz, Lieberman finds worth in cultivating your audience early on. “There’s a huge power today in building a following.” The universal question right now is: how the hell do I do that and why should I? Sure, like Shugs & Fats, just putting it out there and telling your dad, son, brother, mother, guy at the bodega and stranger on the train is beneficial. It’s also important to know where you want to go as a creator and show in general so you can know which platform will be best to blast your work on. Instagram, Snapchat, Vine and Facebook all offer different launching pads for different creations. Lieberman said, “We want to be involved from the ground floor” when it comes to many of their artists. It’s also easier to pitch these budding creators on bigger projects when they have a following. As yucky as it may sound, that’s when that content has been “tested” and “proved” to have an audience. There will always be a desire from some of those bigger companies with deep pockets to monetize a piece of content. It used to be ratings, now it’s followers.

So what’s the end goal here? You make a piece of art, pull your hair out trying to get a following, find a place like Super Deluxe or Above Average to come on board for that project or another one… and then? Well, Lieberman admits that funds are still in TV. Money is the fertilizer to expand any idea or concept — higher production value, more capabilities, etc. But Lieberman asks a good question. For the new generation — 13 to 22 year olds — “when they get to be 30, are they watching television in the same way we do?” It’s a question that dictates the future of digital art. If the answer is “No,” well, then every creator should be focusing on getting their content (I mean, art) online — because someday it might make the Flat Screen TV go the way of the CD — irrelevant.