“You Gotta Be Ready for Anything”: DP Kris Kachikis on Shooting Christopher Guest’s Mascots 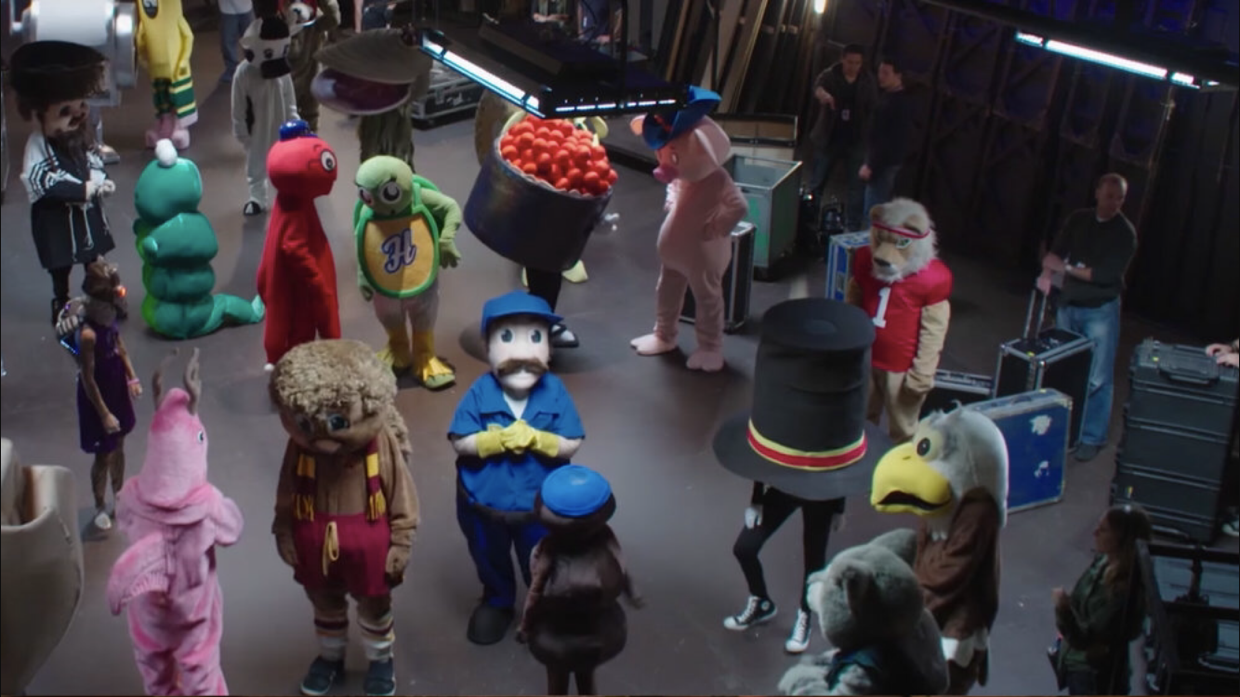 by Matt Mulcahey
in Cinematographers, Columns, Interviews
on Nov 15, 2016

After a decade’s hiatus from feature-length faux documentaries, Christopher Guest returns to his enthusiastically delusional dreamers and kitschy subcultures with the Netflix original Mascots. Set in the world of competitive mascottery, Mascots finds the globe’s preeminent purveyors of plushy entertainment descending upon Anaheim in hopes of winning the World Mascot Association’s highest honor – the Golden Fluffy.

The usual suspects from Guest’s repertory company fill out the cast – Jane Lynch, Fred Willard, Ed Begley Jr., Parker Posey. But behind the camera is a new face in cinematographer Kris Kachikis. Kachikis talked to Filmmaker about choosing the Sony F55 over the Red, Christopher Guest’s obsession with clean audio, and how Birdman inspired the look of Mascots.

Filmmaker: Tell me a bit about how you landed the gig on Mascots. You’d worked with Christopher Guest in the past on commercials, so there was an existing relationship.

Kachikis: Yeah, we had done about two years of commercials together before Mascots came around. I think he liked me and my crew, and when it came time for him to do something narrative he asked me if I would like to join the team. Getting to bring my whole commercial crew with me onto this movie was a great thing, as was getting to stay and shoot in LA. I’d been hoping for a commercial director to take me into features, but I always thought it would be more of a first-time director doing a tiny movie. I never imagined it would be Christopher.

Filmmaker: What’s it like working with Christopher Guest in the commercial world? I have trouble imagining him taking inane client notes.

Kachikis: He does take notes. If [the client] says, “We need to see the can of 7 Up,” he is going to show the can of 7 Up. He’s not ridiculous about it, but he does have his way of working. He is very particular and if the client isn’t willing to work the way that Christopher works, then he doesn’t do the commercial.

Filmmaker: When Christopher first approached you to do Mascots did you basically just get an outline?

Kachikis: At first I got this thirty-page outline for the movie, and then Christopher went over plot points that needed to happen in certain scenes. But you have absolutely no idea about the dialogue. You have no idea how the actors are going to get to those plot points or what they are going to do in the scene. So on the day we’ll sort of block a scene out, then we’ll light it, and then we shoot it. Pretty standard, really. Everything is shot with two cameras [getting] two cuttable angles all the time. In the more narrative moments, that usually means shooting two overs or [close-ups] on the actors, or a wide and an over. Then if it’s in an interview scenario you’re shooting two cuttable sizes. We also did a couple of Steadicam oners, which was new for Chris, and we changed up the interviews a little bit. Usually the characters look off-camera for the interviews in his other films, but we had them look right down the barrel, which is a bit more of a current documentary aesthetic and it gives you a little closer connection with the characters.

Filmmaker: What did you shoot with?

Kachikis: I own two Alexas and that’s what I like to work with, but Netflix mandated that we shoot 4K, so we shot with a Sony F55 after we tested every 4K camera that was out there. We thought the skin looked the best with the Sony and Christopher had a bad experience with a Red camera on one of his other projects, so he and I were both gun-shy on the Red. The thing that killed the Red in the test was, to me, there was a lot of noise in the blacks. The whole end of the movie is these live performances in a theater with lots of contrast and on the Sony it looks beautiful, but there was a lot of noise in the dark blues and blacks when we tested the Red. A lot of people love that noise and say, “Oh, it looks like film grain,” but if I want to put film grain in there, I can do that later (in post). We just wanted a clean image and the Sony gave us that.

Filmmaker: Depending on which Alexa you’re shooting with, you might have the option of upscaling the footage to 4K Ultra High Definition (UHD). Will Netflix not accept that because it’s not true 4K?

Kachikis: They did not accept it. They’ll accept the Alexa 65, but they don’t accept 4K UHD. When we tested all the 4K cameras we also shot the [Arri] Amira in 3.8K as our standard to check the other cameras against. I set up the test and then I left and one of my assistants shot the test so I wouldn’t know which (footage) was shot by which camera. The Amira won that blind test, according to me, and the Sony came in second. So we went with the Sony.

Filmmaker: How about lenses?


Filmmaker: Did you test lenses as well or had you worked with the Primos before?

Kachikis: One of my influences for the move was Birdman. In that movie, cinematographer [Emmanuel] Lubezki never shoots cross coverage, because everything is one roving take, but he still covers all the angels in that one take [by moving the camera]. So he’s lighting the shot to accommodate all those angles and it still looks good. So I wondered, “How’s he doing that?” and noticed that he’s using a lot of sources in the shots with fluorescents rigged to walls and other bulbs in the middle of the frame. I love [Zeiss] Super Speeds and older glass like Kowas, but what I found is that those lenses could not handle the flares from that style of lighting. So I had to go to a heavier flare-suppressing lens like the Panavision Primos.

Filmmaker: The Christopher Guest movies have traditionally taken place in subcultures with practical references – community theater, folk concerts, indie film sets, dog shows. As far as I know, there isn’t really a large-scale mascot association championship. How did you decide on the look for the competition performances?

Kachikis: We had YouTube references of mascot competitions and they kind of look like a cheerleading competition or a lower rent fashion show. So we needed a stage that would match the economies of the World Mascot Association (WMA). We didn’t want to go too aspirational and we didn’t want to go too low-rent either. A discussion point was a movie like Pitch Perfect. It’s a college a cappella singing competition but it looks like a Beyoncé concert with 125 moving lights in the show. We didn’t want to take it that far, but we wanted to find a scale that made sense for the WMA.

Filmmaker: What location did you use for the competition’s arena?

Kachikis: The exterior is the Santa Monica Civic Center and the actual show stage was shot there as well. The backstage area — the hallways, the dressing rooms with those beautiful bulbs, all of that — was at the Pasadena Civic Auditorium.

Filmmaker: The final film only has short snippets of the interviews, but how much do you typically shoot for each character? Do you just roll the camera and let the actors go until the card fills up?

Kachikis: No, no. Christopher grew up working with film. A lot of these younger commercial guys I work with, we have a joke amongst the crew that it’s ABR – Always Be Rolling. But Christopher calls cut. We shot so little on Mascots you’d be shocked. I did a movie after this which I’m just now doing the digital intermediate for called Why Him? and that director [I Love You Man’s John Hamburg] would fill up 40 minute takes shooting Raw on the Alexa. But Christopher does not roll a lot. For the interviews he really just lets [the actors] talk. He doesn’t ask them a bunch of questions.

The only time Christopher will usually do something more than three or four times is if a take gets interrupted because of audio. A lot of people don’t notice the sound mix on a Christopher Guest movie because there’s not music over anything, but we had a joke that only three things are important to Christopher: sound, sound, and sound. If he hears a plane 20 miles away, you’re going to hear “cut.” He is such a perfectionist with the sound. When we did Parker Posey’s interview outdoors [at the college where her character works], you just wanted to shoot yourself in the head because Parker was doing all this great stuff and there’s leaf blowers and garbage trucks and trains and the whole time the light is moving on me.

Filmmaker: One thing that’s unique about Christopher’s way of making movies, and this has to be strange for a DP, is that you don’t really know if a scene is going to play comedically or dramatically. How does that affect your job, not knowing what the tone is going to be until you’re rolling?

Kachikis: There’s a deleted scene where Chris O’Dowd’s character talks about this old friend of his and he goes to visit him in this down-and-out shitty motel. So we lit it with contrast and it’s a beautiful scene, but the scene took a spin that was so dark. It was still funny, but it was also sad. There was so much pathos and Chris O’Dowd’s character reveals this wonderfully empathetic side. It ended up getting cut out, but it was a pretty amazing scene. So that was a case where the lighting really matched the scene but, yeah, you’ve gotta be ready for anything because you never know.