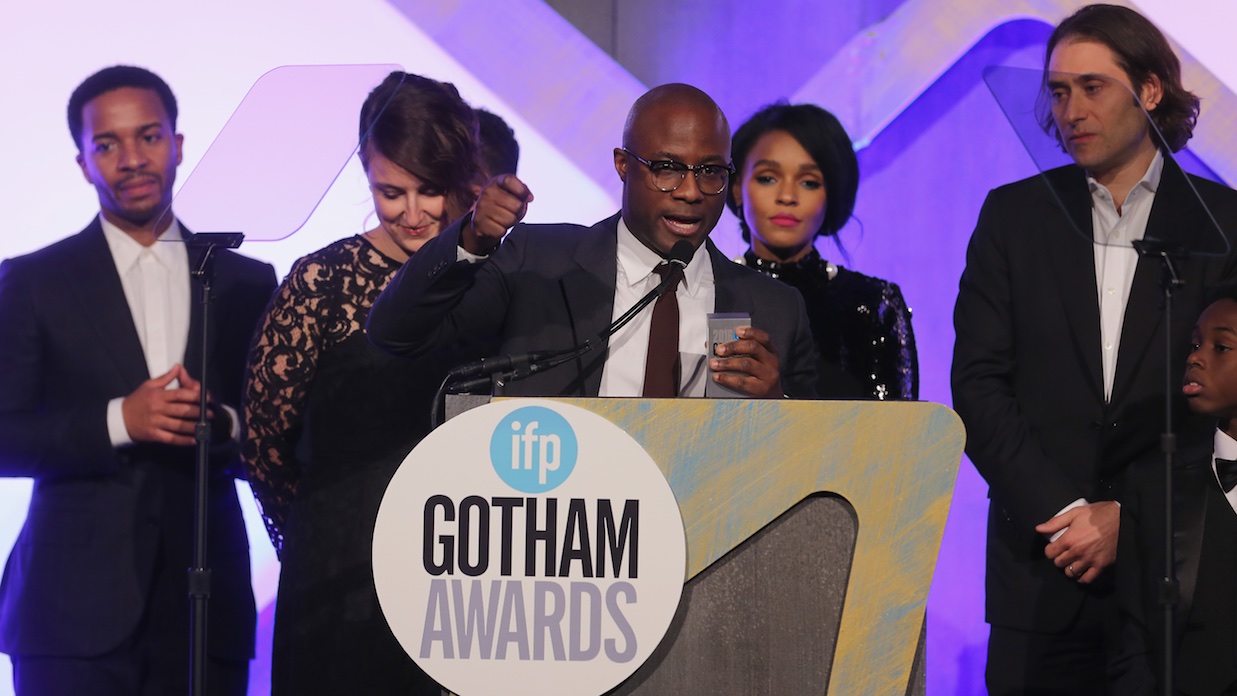 Barry Jenkins and the Moonlight team. (Photo by Jemal Countess/Getty Images for IFP)

In 2008, Barry Jenkins remembered on one of several trips up to the podium tonight at the 26th Annual IFP Gotham Awards, held, as usual, at Cipriani Wall Street, he was in this same room as one of the nominees for Best New Director. He lost that year to Ballast‘s Lance Hammer, and, as he went on to note, he hasn’t made a film in the long eight years following. (Neither has Hammer, actually, although I hear that’s changing.) Until Moonlight. His beautiful, amazingly accomplished and much beloved second feature took home four awards tonight, including the Gotham Audience Award, a Special Jury Prize for Ensemble Performance, the Best Screenplay prize and, finally, Best Picture.

A clear favorite, Jenkins’s four trips to the podium were all protracted as he was surrounded by crew and well wishers each time. Of the type of personal, deeply humanistic story that Moonlight is, Jenkins said, “Right now, they are more needed in this world than they have ever been.” The comment was a graceful reflection on the recent U.S. election, a topic that not-surprisingly ran through the evening in both subtle and not-so-subtle ways. IFP Executive Director Joana Vicente said, ““The films nominated tonight show us so much about our lives and our world” while Keenan-Michael Key opened his monologue by summoning up the surreality of the moment. He said he had been on a desert island for three weeks and didn’t know anything that had happened recently, and his jokes consisted him of tearing up his jokes — planned comments on diversity, women breaking the glass ceiling, etc. A woman at my table joked, “Too soon?”, and indeed, much of the crowd who mingled both before and after still seemed somewhat shell-shocked by Trump, a disorientation given voice by tribute winners like Oliver Stone, whose unexpectedly gentle, short speech began with the storied director noting his own age (70), saying “I’d like to go on,” and telling the younger filmmakers in the audience to, over the course of their own, hopefully, long careers to “to take it easy on yourself… Don’t run yourself out.” And, he mentioned the subject of his latest film, Edward Snowden, who warned that our massive state surveillance network is available to incoming President Trump. To the filmmakers, he said, “it is possible to be critical of your government,” and that “I hope you young people will address it.”

More of the speeches, though, could have been delivered any year, even as their calls for inclusiveness, community, diversity and the power of non-mainstream storytelling resonated more deeply this one. Tributee Amy Adams, who just won the National Board of Review Best Actress Award for Arrival, focused her speech on the rewards of Junebug, Phil Morrison’s 2005 independent feature, which Adams co-starred in following a slew of television work. “A movie made for under one million has given me the privilege to have this career,” she said. “Before Junebug I was having a hard time trying to find my voice. I was trying to fit in, to be normal.”

Cate Blanchett, incidentally, intro’d Adams (“her screen presence is entirely unique”) with a flowing, mellifluous intro speech that had all the intimacy of a good friend telling you a story at the corner bar. Actors and actresses who cut through the rote stagecraft of events like this always knock the hell out of me.

The wildest and wooliest intro speech of the night was Winona Ryder’s who gave a long, impassioned, at times tearful celebration of her friend and colleague, the multi-hyphenate Ethan Hawke. Both called out the earlier portion of their careers, citing their work on Reality Bites (1994), while Ryder said of Hawke that “she’s never known anyone who has been interested in so much.” And then: “You have the thirst to suck the marrow.” You haven’t heard that line on an awards show before. For his part, Hawke turned to Ryder and said, “You’re a woman who loves the arts. I wouldn’t be sitting here if it weren’t for you.” He then went on to site his early appearance, at age 14, in Joe Dante’s Explorers. One critic trashed him and wrote that he’d never be a movie star. So, he said, “the only thing I know for certain I will is be washed up again very soon. And I hope the next time I’m washed up it won’t be the last time because there so many people here I’d like to work with. Special welcome to everyone here for the first time.”

Moonlight was a clear favorite in a evening that, as always, delivered some surprises, the biggest of which was Isabelle Huppert’s win for Best Actress in Paul Verhoeven’s Elle. An astonished Huppert said on stage that her distributors told her she didn’t stand a chance — “It’s a very American award, very New Yorker — you’ll never get it!” Saying she had just got off a plane and had been on the Paris stage the night before, the visibly shocked Huppert tried to thank the IFP, but couldn’t place it: “Thank you, whoever organized this, whatever it is!” And the Best New Actress went to Anya Taylor-Joy, who delivered her performance in Old English in Robert Egger’s 16th-century-set The Witch.

Casey Affleck won Best Actor for Manchester by the Sea, and Ezra Edelman’s television miniseries O.J.: Made in America won Best Documentary. And I was particularly happy to see Trey Edward Shults, a 2015 25 New Face, win the Bingham Ray Breakthrough Director Award for his incredible Krisha, which is deserving of more love on the current awards circuit.

With his old school Hollywood mien, mega producer and financier Arnon Milchan, a final tribute winner, seemed to have stepped out of a different show. “I started by collecting paintings, and then sculpture, and then movies,” he said.

The two series awards went to Crazy Ex-Girlfriend (Best Long-Form Series, beating out Filmmaker favorite Jessica Jones) and Her Story. The latter filmmakers sent a note to be read as their acceptance speech, writing that, as independent online creators, they are “too poor” to attend.

For the first time, the Gotham Awards contained an awards show within the awards show, which added to the evening’s length but also brought some energetic awardees to the mix. Master of None‘s Aziz Azari spoke of moving to New York, the ease with which you can steal crafty from the sets of Mr. Robot, and his own neighborhood encounters: “Without New York, I would probably be living in South Carolina, there would be no Gotham Awards, no friendship with Nick Kroll, no sightings of Jim Jarmusch in my neighborhood.” Other Made in New York awardees were the Mayor’s Office of Media and Entertainment (accepted by commissioner Julie Menin and Deputy Mayor Alicia Glen) and Transparent actress Judith Light.

For Best Documentary, presented by Annette Bening and Greta Gerwig

For the IFP Gotham Audience Award, presented by Damian Lewis

The Audience Award was voted for on-line by IFP members.

Casey Affleck in Manchester by the Sea
Released by Amazon Studios

Anya Taylor-Joy in The Witch
Released by A24

Trey Edward Shults for Krisha
Released by A24