“There’s No Such Thing as a Post-Racial America”: Sam Pollard on Two Trains Runnin’ 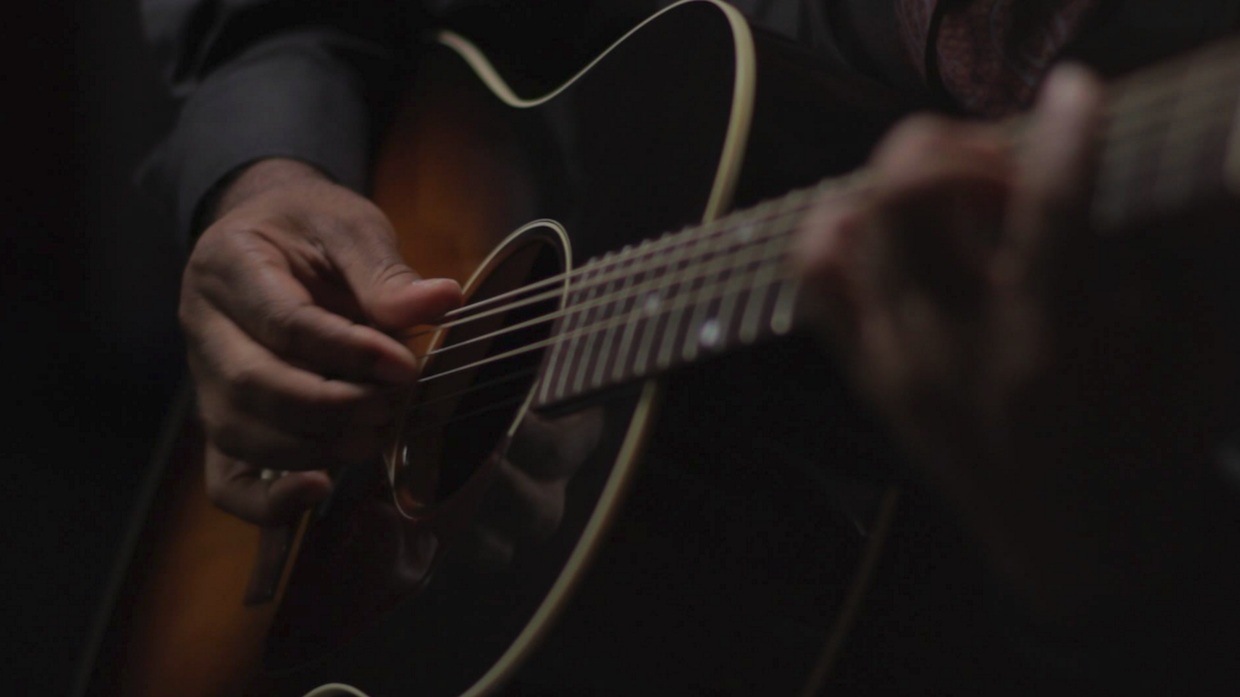 In the summer of ’64, after President Lyndon B. Johnson passed the Civil Rights Act which enabled African-Americans to vote for their government, many young men and women (primarily white) took to Mississippi to join the Mississippi Summer Project, a season long initiative that would register African-Americans to vote in an increasingly dangerous, highly segregated and hate-filled state. At the same time — and as politically removed from the tense, racist climate as could be — two groups of white, male country blues fans (unbeknownst to each other) from the “big cities”also headed to Mississippi to search for the whereabouts of two long-forgotten blues singers, Skip James and Son House. How these men’s obsession with tracking down their idols intersected with the Freedom Summer of 64 is at the heart of Pollard’s film. As Two Trains Runnin’ screens in theaters throughout the country, I spoke with Pollard about developing a love for country blues, using animation to recreate specific moments in time, and the issue of voter suppression in 21st century America.

Filmmaker: I was wondering if you could speak about the genre of country blues and how, or rather if, it’s played a significant role in your life.

Pollard: To be honest with you, up until I was about 40 years old, I didn’t like country music at all. I grew up in New York City listening to Motown, The Temptations and The Supremes. I was a major fan of progressive jazz like Charlie Parker. I was fortunate to work on a documentary about blues musicians in the 1990s and it really grabbed me, listening to people like Son House, Skip James, and Mississippi John Hurt. I listened to their raw edge and their sound. They really talked about the pain of life and the pain of love. I listened to every blues musician I could find a record of, I really fell in love with it. These guys were the foundation of American cultural music, of American roots music. Their legacy and what they’ve done, both black and white, was so important and so revolutionary, and that’s why it was such a great pleasure to work on this film.

Filmmaker: After a strong start, the genre of country blues fell out of fashion with African-Americans in the middle of the 20th century. Why was that the case?

Pollard: In the early ’20s, people like Bessie Smith and Ma Rainey, the female blues singers, became very popular. Someone then latched onto the fact that “Oh, we should record some of these great country blues singers like Robert Johnson, Skip James, and Son House.” When those records were finished in the late ’20s and early ’30s, they didn’t sell as well. These musicians thought their careers were going to take off and it didn’t happen. Men like Skip James and Son House couldn’t make a living from it, so they went back and took on regular jobs until they were rediscovered.

Filmmaker: The film follows two separate groups of young white men traveling from the east, the “big city,” to Mississippi in the summer of 1964 to locate Son House and Skip James. But the story is also about how these men may have been unaware of what they were initially getting themselves in to, given the political climate at the time. Where did those two narratives merge for you?

Pollard: I have to really tip my hat to Benjamin Hedin, the producer and writer on the film. He was the one who initially approached me about the project and said, “I don’t want this to just be a film about the rediscovery of Son House and Skip James. I want it to also be a film that looks at that pivotal summer in the Civil Rights Movement.” There was always the idea that we were going to tell these parallel stories at the same time, and it was a difficult one because it made it a more layered and complicated film to pull off.

Filmmaker: Occasionally you use animation to illustrate your interviewees’ recollections from 50 years ago. I’m thinking specifically of the scenes in the cotton fields and the moment involving asking directions from an intimidating group of white men. How much creative freedom did you have in choosing what to animate?

Pollard: There was no material, no actual footage of these guys like John Fahey and Phil Spiro actually searching for these artists. We either had to use reenactments with actors (which I had done in previous films) or animation. My co-producer and editor Dava Whisenant had seen Searching for Sugar Man and thought the animation in that film was extremely well done, so she suggested that we animate our characters’ journey. We found this company in Sweden called Apparat (who had worked on Searching for Sugar Man), and they would send us some of their footage. We’d then critique it and send it back to them. It was a real back-and-forth.

Filmmaker: While the film features musical recordings of the blues singers of yesteryear, you also incorporate current musical artists performing for your camera and providing a visual soundtrack accompaniment to your film. Could you talk about the process of wanting to use musicians from the 21st century and getting them to perform for your camera?

Pollard: I had told Ben Hedin that one of the things I thought would make this film unusual (besides the use of the animation) would be to incorporate contemporary 21st century musicians like Chris Thomas King, Valerie June, Lucinda Williams, and Gary Clark Jr. I thought about how these musicians could perform this music to keep it lively and keep it present. We wanted people to understand that this film is not just about civil rights and not just about country blues. It’s also an understanding that country blues still goes on today and has not become a relic.

Filmmaker: Did you have a long list of artists that you wanted to feature?

Pollard: We came up with a list and got everyone we wanted. We thought it would be most difficult to get Buddy Guy and then we even got Buddy Guy!

Filmmaker: As the film builds to a section involving the 1964 Newport Folk Festival, you show the Blues House, a home where many of the invited country blues singers stayed for the event. You recently went back there for this project. How was that experience?

Pollard: The film was originally going to start with the story of the Blues House, and then transition to flashbacks to show how we got there. We realized, though, that the film couldn’t just be about the Blues House. We decided to go back and shoot there because it was such a pivotal place that brought together Mississippi John Hurt, Skip James, Son House, and all of these wonderful people. It was important to say that country music had been revived. Here was a moment in time where all of these great musicians came together to enjoy themselves and to play music that they had shaped and created, which was now being given its due respect.

Filmmaker: There are scenes in the film where it’s made clear that the African-American community had to get white men and women involved in the Civil Rights Movement in order for the “outside world” to pay attention. That it takes white involvement to get people to wake up is extremely tragic, and the murder of Andrew Goodman, James Chaney, and Michael Schwerner by the KKK, for example, is a example of this. Could you speak about incorporating those men into the story and what they did to amplify the Civil Rights Movement that summer?

Pollard: I think we all need to remember that historically this was a monumental time for the Civil Rights movement for young people, both black and white, to decide the voting rights for African-Americans in Mississippi, knowing the dangers they would have to face.  What really helped tie this film together was the fact that the day Goodman, Chaney, and Schwerner went missing (June 21st, 1964), was the same day John Fahey found Skip James and Dick Waterman and Phil Spiro located Son House. We thought that was a wonderful climatic moment for this parallel journey. As it’s said in the film, the death of Chaney, Schwerner and Goodman was what galvanized the country. That was part of the strategy then, to get young white people involved. When they would work the frontlines and be attacked, the news media would react in a much stronger fashion. It’s much like what happened in 1963 when you would see photos of children being attacked [during the Children’s Crusade] with waterhoses.

Filmmaker: Former Governor of Mississippi Ross Barnett (1960-1964), appearing in the film giving a rally cry to strengthen segregation, was a Trump-like figure, perhaps being a bit more blunt about his initiatives than other politicians are today (but nonetheless sharing similar interests). Do you invite that political comparison?

Pollard: I don’t think we consciously wanted to draw any parallels. It’s sad to say, but we just came out of a presidential election campaign where some of the language from President-elect Trump was as horrific as some of the language used by Ross Barnett in the ’60s. It’s not like we consciously said, however, that we should put footage of Barnett in the film so that people will make connections [to Donald Trump]. The sad thing is that history continues to repeat itself. A parallel doesn’t need to be made [between now and the present]; it’s just present, it’s ever-present. The issue of race in America has existed for over 200 years and it will probably exist for another hundred years after I’m gone.

Filmmaker: The film briefly touches on current-day voter suppression in America, paralleled with what the Voting Rights Act attempted to squash in 1965. The statement is made loud and clear. With the current President-elect claiming that the most recent election (which he won) was rigged, what your thoughts are on voter turnout and what this country can do better to get more people out to vote?

Pollard: I’m not going to even talk about if the election was rigged. It’s about the country realizing that there’s no such thing as a post-racial America. There’s always going to be challenges for those on the left, those who believe in liberty and the rights of all people, who fight those on the right who say we want to control how people live and how people vote. This is struggle that’s been going on since before America existed — a fight, in my opinion, between good and evil. I know it’s much more complex than that, but I have to be blunt. It began before America existed and it will continue after America is gone.

Filmmaker: The film participated in the Hot Docs Dealmaker sessions. How can those types of programs can help documentary filmmakers in all types of markets?

Pollard: Hot Docs is an important place for filmmakers to have an opportunity to show what they’re trying to make and hopefully get someone to support them financially. I’ve been to it more than once. I don’t always like it, but as documentary filmmakers, we don’t usually have the luxury of someone coming to us and saying “here’s a million bucks, here’s $300,000…now make your film.” You have to do the work and you have to beat the bushes. That’s why Hot Docs and all of these organizations and programs exist.

Filmmaker: Has it gotten any easier for you when it comes to finding funding for a new project?

Pollard: I’ll tell you this: I’ve been in this business for over thirty years. I’ve made lots of documentaries both as an editor and as a director. It never gets easier.