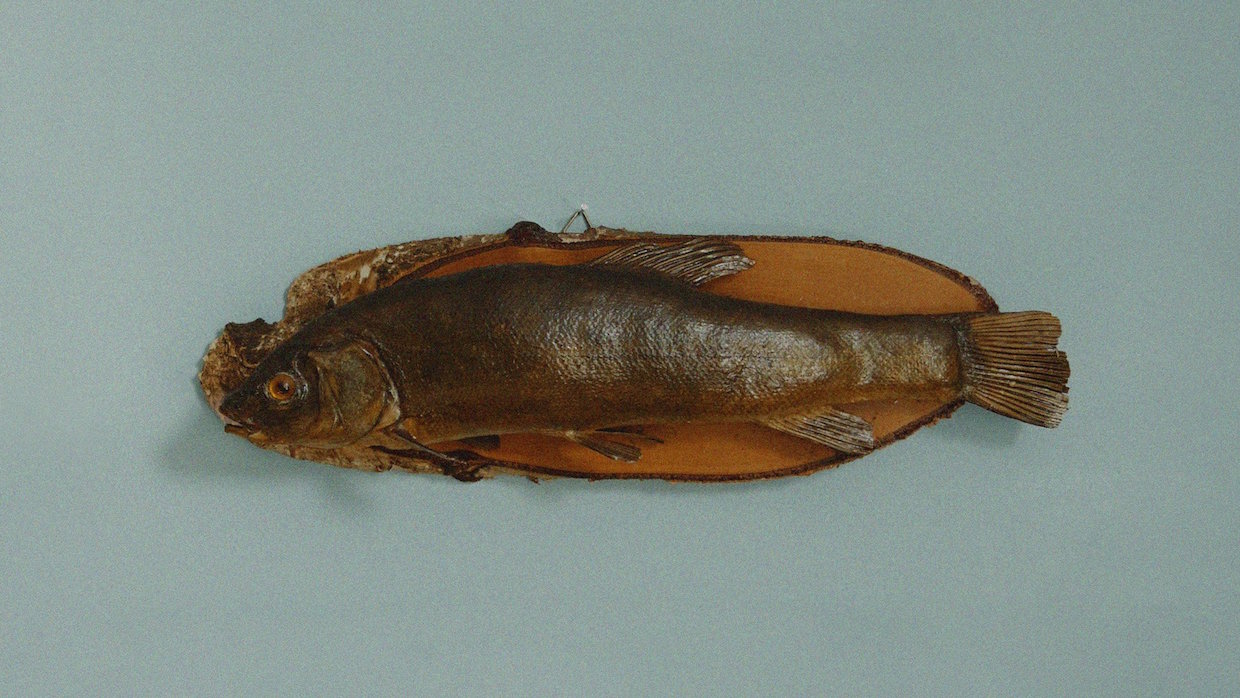 Following the announcement of its competition, NEXT, New Frontier, premieres, midnight, kids, spotlight and special events slates, Sundance rounds out its slate with a list of the shorts to be shown during the festival. Some quick highlights: Come Swim, Kristen Stewart’s first narrative short; Fish Story, the new short by documentary filmmaker Charlie Lyne (Beyond Clueless), who’s also been a contributor to Filmmaker; and a new film from Jim Cummings, winner of last year’s Short Film Grand Jury Prize for Thunder Road. He returns with The Robbery, whose one-line synopsis is unimprovable: “Crystal robs a liquor store—it goes pretty OK.”

American Paradise / U.S.A. (Director and screenwriter: Joe Talbot) — A desperate man in Trump’s America tries to shift his luck with the perfect crime in this story inspired by true events.

Come Swim / U.S.A. (Director and screenwriter: Kristen Stewart) — This is a diptych of one man’s day, half impressionist and half realist portraits.

GOOD CRAZY / U.S.A. (Director and screenwriter: Rosa Salazar) — A complex chick deals with a vanilla beau, a shitty brunch and a dead coyote all in a Los Angeles day. There’s batshit crazy and then there’s good crazy—she fits somewhere in between.

Hardware / U.S.A. (Director: Stephen Jacobson, Screenwriters: Ellen Stringer, Stephen Jacobson) — An amateur electronic-drum enthusiast travels to a housewares trade show looking to strike up the perfect business partnership. When things don’t go as planned, he finds himself at the mercy of the electronic drumbeat playing in his head.

Hold On / U.S.A. (Director and screenwriter: Christine Turner) — Family bonds are tested when a young man is left to care for his grandmother one morning.

Hot Seat / U.S.A. (Director and screenwriter: Anna Kerrigan) — Teenaged Andrea uses a male stripper to gain the respect and admiration of cool girl Daphne in this exploration of coming-of-age sexuality and teen girls’ complex relationships, based on a true story.

I Know You from Somewhere / U.S.A. (Director and screenwriter: Andrew Fitzgerald) — A young woman incurs the wrath of the internet after she inadvertently becomes a viral sensation.

Kaiju Bunraku / U.S.A. (Directors: Lucas Leyva, Jillian Mayer, Screenwriter: Lucas Leyva) — Here’s a day in the life of a husband and wife living in a world of giant monsters.

Laps / U.S.A. (Director and screenwriter: Charlotte Wells) — On a routine morning, a woman on a crowded New York City subway is sexually assaulted in plain sight.

Lucia, Before and After / U.S.A. (Director and screenwriter: Anu Valia) — After traveling 200 miles, a young woman waits out Texas’s state-mandated 24-hour waiting period before her abortion can proceed.

New Neighbors / U.S.A. (Director and screenwriter: E.G. Bailey) — How far will a mother go to protect her children?

Night Shift / U.S.A. (Director and screenwriter: Marshall Tyler) — Get a glimpse into a day in the life of a bathroom attendant in a Los Angeles nightclub.

Shinaab / U.S.A. (Director and screenwriter: Lyle Corbine) — A young Anishinaabe man struggles with his place in the inner city of Minneapolis.

5 Films About Technology / Canada (Director and screenwriter: Peter Huang) — Take a satirical look at the dumber side of technology.

And so we put goldfish in the pool. / Japan (Director and screenwriter: Makoto Nagahisa) — One summer day, 400 goldfish were found in the swimming pool of a secondary school. This is a story about the four 15-year-old girls who put them there.

And The Whole Sky Fit In The Dead Cow’s Eye / Chile, U.S.A. (Director and screenwriter: Francisca Alegría) — Emeteria is visited by the ghost of her patrón, Teodoro. She believes he has come to take her to the afterlife—but he has more devastating news.

Dadyaa — The Woodpeckers of Rotha / Nepal, France (Directors and screenwriters: Pooja Gurung, Bibhusan Basnet) — Atimaley and Devi’s village is haunted by memories. When a dear friend leaves the village without saying goodbye, the old couple faces a dilemma: keep living with the memories or leave the village for good?

Dawn of the Deaf / United Kingdom (Director and screenwriter: Rob Savage) — When a strange sound wipes out the hearing population, a small group of deaf people must band together to survive.

The Geneva Convention / France (Director and screenwriter: Benoit Martin) — As Hakim is waiting for the bus after class, he is caught in a vendetta between teenagers. He’s not exactly keen to be involved, but can he avoid it?

HEAT / Poland (Directors and screenwriters: Agata Trzebuchowska, Mateusz Pacewicz) — A young boy does an unusual favor for a friend, assuming his identity to visit his senile grandmother. The woman takes him for a walk, and tells him about the biggest mystery of her life.

Kao Shi (A Test) / China (Director and screenwriter: Zuxiang Zhao) — In a small-town high school, days before the college entrance exam, teacher Chen Jun finds out that the father of his most promising student has died in a mining accident. Telling him—or not—bears heavy consequences.

MappaMundi / Austria (Director and screenwriter: Bady Minck) — Through the eyes of cosmic cartographers, the viewer takes a voyage through 950 million years of Earth history and 15,000 years of cartography. This accelerated journey visualizes the change in our world—a change unnoticeable in a single lifetime.

Pedro / Portugal (Directors and screenwriters: André Santos, Marco Leão) — Pedro gets home at dawn. Before the young boy falls asleep, his lonely mother drags him to the beach.

What Tears Us Apart / France (Director and screenwriter: Wei Hu) — A Chinese couple visits the daughter they gave up for adoption 30 years ago. While meeting the French adoptive parents, language barriers become apparent and the birth mother’s hidden emotions rise to the surface.

Alone / U.S.A. (Director: Garrett Bradley) — This investigation into the layers of mass incarceration and its shaping of the modern black American family is seen through the eyes of a single mother in New Orleans, Louisiana.

Bayard & Me / U.S.A. (Director: Matt Wolf) — Walter Naegle’s boyfriend, Bayard Rustin, was a famous civil rights activist 30 years Walter’s senior. In the 1980s, Bayard decided to adopt Walter for legal protection. This love story is about a time when gay marriage was inconceivable.

Close Ties / Poland (Director: Zofia Kowalewska) — Barbara and Zdzislaw will soon celebrate their 45th anniversary—despite their constant bickering, and the fact that Zdzislaw spent eight of those years living with another woman. This is a portrait of a relationship that, somewhat inexplicably, perseveres.

The Diver / Mexico (Director: Esteban Arrangoiz) — Julio César Cu Cámara is the chief diver in the Mexico City sewer system. His job is to repair pumps and dislodge garbage that flows into the gutters to maintain the circulation of sewage waters. THE NEW CLIMATE

Hairat / Ethiopia (Director: Jessica Beshir) — This is a visual and lyrical exploration of the nightly ritual between a man in Eastern Ethiopia and his feral companions.

My Father’s Tools / Canada (Director: Heather Condo) — Stephen continues producing traditional baskets to honor his father and thus finds peace in his studio as he connects with the man who taught him the craft.

Project X / U.S.A. (Directors: Laura Poitras, Henrik Moltke) — A top secret handbook takes viewers on an undercover journey to the site of a hidden partnership. Based on NSA documents, this film reveals the inner workings of a windowless skyscraper in Manhattan.

The Rabbit Hunt / U.S.A. (Director: Patrick Bresnan) — On the weekends during the harvest season, 17-year-old Chris and his family hunt rabbits in the sugarcane fields of the Florida Everglades.

Ten Meter Tower / Sweden (Directors: Maximilien Van Aertryck, Axel Danielson) — People who have never been up a 10-meter diving tower must choose whether to jump or climb down in this entertaining study of people in a vulnerable position.

Tough / United Kingdom (Director: Jennifer Zheng) — New light is shed on childhood cultural misunderstandings when a Chinese mother and her British-born daughter speak as adults for the first time. Some things can only be understood with maturity.

Visions of an Island / U.S.A. (Director: Sky Hopinka) — Indigenous and foreign presences coexist on an Alaskan island in the center of the Bering Sea. THE NEW CLIMATE

Waiting for Hassana / Nigeria (Director: Ifunanya Maduka) — In 2014, 276 teenage girls came together for exams in Chibok, Nigeria—by dawn, nearly all had disappeared, and their school was burned to the ground. Jessica, an escapee, shares her haunting account of a friendship violently interrupted by Boko Haram.

Do No Harm / New Zealand (Director and screenwriter: Roseanne Liang) — 3:00 a.m., 1980s Hongjing: In an aging private hospital, a single-minded surgeon is forced to break her physician’s oath when violent gangsters storm in to stop a crucial operation.

A Nearly Perfect Blue Sky (Un ciel bleu presque parfait) / France (Director and screenwriter: Quarxx) — You might think that Simon lives a monotonous life, but you would be wrong—contrary to appearances, he doesn’t live alone among the ruins of an old farm. Between kidnapper and guardian angel, he never takes his eyes off his roommate.

Pussy / Poland (Director and screenwriter: Renata Gasiorowska) — Alone at home one evening, a young girl decides to have a solo pleasure session—but not everything goes according to plan.

The Bald Future / France (Director and screenwriter: Paul Cabon) — Being a bald man sucks. Knowing you’ll become one is worse.

Black Holes / U.S.A., France (Directors and screenwriters: David Nicolas, Laurent Nicolas) — Dave is about to lead the first mission to Mars when he’s teamed up with a sentient melon, who claims to be the reincarnation of a fashion designer, upstaging his big moment and driving him to the brink of madness.

Broken – The Women’s Prison at Hoheneck / Germany (Directors: Volker Schlecht, Alexander Lahl, Screenwriters: Alexander Lahl, Max Mönch) — This animated documentary about Hoheneck, the main women’s prison in former East Germany, is based on original interviews with former inmates. It’s a film about political imprisonment, forced labor and enormous profits on both sides of the Iron Curtain.

Drawn & Recorded: Teen Spirit / U.S.A. (Director: Drew Christie, Screenwriters: Drew Christie, Bill Flanagan) — This is the story behind one of the most iconic songs ever written, animated in the style of a pop-up book.

It’s a Date / U.S.A. (Director and screenwriter: Zachary Zezima) — This film explores miscommunication, perceptions and vulnerability in the modern world. Everyone is an alien at first.

LOVE / France, Hungary (Director and screenwriter: Réka Bucsi) — Abstract haiku-like situations reveal the changing atmosphere on one planet caused by a meteoric impact in a distant solar system. Inhabitants on this pulsing planet become one with each other, in various ways, in this three-chapter exploration of affection.

Nighthawk / Slovenia, Croatia (Director: Špela Čadež, Screenwriters: Gregor Zorc, Špela Čadež) — Attempting to remove an unresponsive badger from a dark road, a police patrol soon realizes that the animal is not dead but rather dead drunk. Things take an even stranger turn when the creature wakes up.

Nutag — Homeland / Canada (Director and screenwriter: Alisi Telengut) — This hand-painted visual poem explores the ideas of diaspora, homeland and the mass deportations of the Kalmyk people during World War II.

Summer Camp Island / U.S.A., South Korea (Director and screenwriter: Julia Pott) — Oscar and his best friend, Hedgehog, just got dropped off at summer camp. Once the parents leave the island, the strangeness lurking beneath the surface is revealed—aliens exist, horses become unicorns and there are monsters under the bed.

Victor & Isolina / U.S.A. (Director: William Caballero) — Creatively visualized through 3D printing, two elderly Latinos embark on a resonating he said/she said account of the events that led them to live separately after more than 50 quirky and stressful years together.