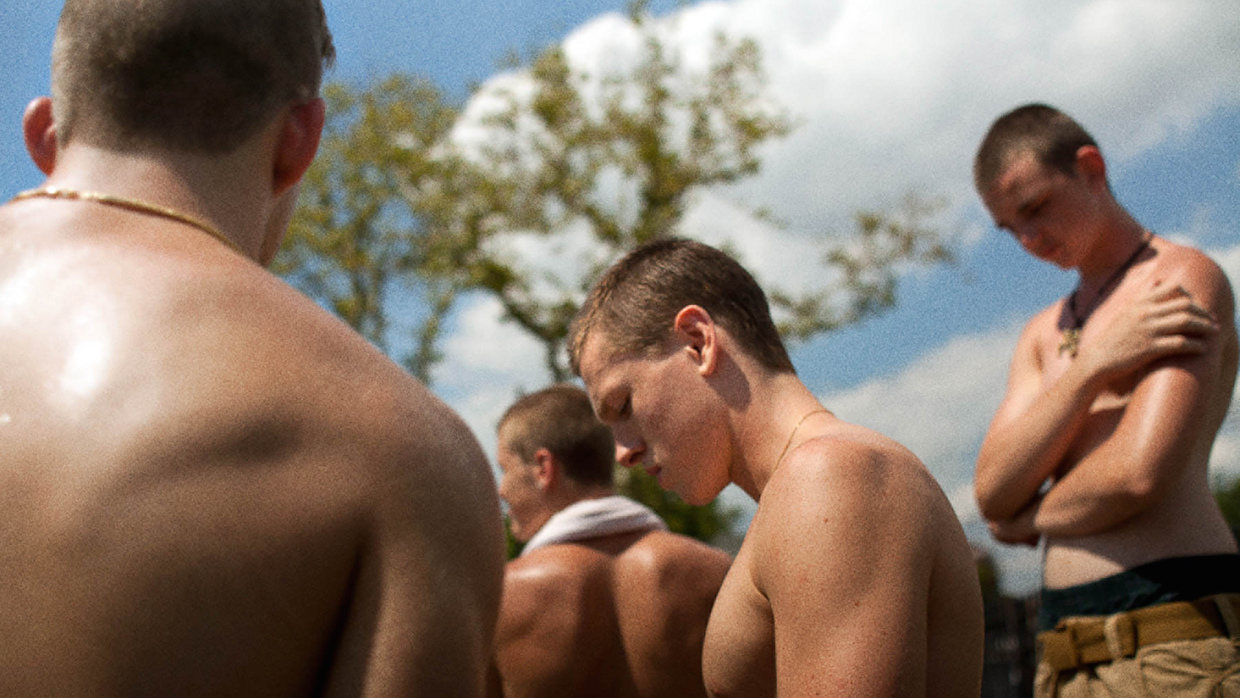 Eliza Hittman’s Beach Rats is a logical companion piece to It Felt Like Love. The latter focused on a teen girl whose hellbent determination on losing her virginity ASAP placed her at peril amid a world of the worst possible dudes; here, we have a teen guy coming to terms with his probable queerness in an antagonistically heteronormative milieu. The story’s simple enough: already staggering under the weight of his extremely ill father, dying slowly in the living room, Frankie (Harris Dickinson) cruises webcam sites at night, surreptitiously seeking out hook-ups. “I don’t know what I like,” he tells those who ask him what he’s looking for, but seems to have a thing for older dudes. Furtive nighttime assignations are kept under wraps; otherwise, Frankie continues presenting as unambiguously straight in front of his lunkheaded lifelong friends, going so far as to try to use Simone (Madeline Weinstein) — a girl who unambiguously comes on to him — as a beard. The center can’t hold, and the film spirals downwards towards tonally inevitable tragedy.

16mm’s textures heighten the digital sheen of the computer screen Frankie keeps staring at, a nice way of navigating the split between capturing old-school neighborhood vibes and the brave, no-longer-so-new online world that could offer a way out. Frankie’s dilemma is clear: embracing his sexual identity is a totally covert pursuit at best, which is inevitably stressful, or a guarantee of having to leave everything he knows and starting from scratch. You’ve heard Simone’s diagnosis before when Frankie discreetly sounds her out: “When two girls make out it’s hot, but when two guys make out it’s gay.” Frankie and his friends coast from hour to hour on a heavy regimen of weed, booze and furtively acquired prescription meds, life seemingly unbearable without a constant severe narcotics buffer. There’s an interesting if not unfamiliar tension here between the normative values on display — loyalty to friends and family, a minimum of lip service to the church, a relentless emphasis on heterosexual coupling — and the underlying ubiquitous drug culture that’s just barely one step above meth addiction.

Hittman and DP Hélène Louvart revisit Love‘s methods, and yet — despite the reams of exquisitely shot, up-close-and-Denis-esque-personal close-ups of hands on arms and other body parts in isolation, subjective snapshots of sexual fixation — I never got the sense of queer desire rendered viscerally. What would I know about this? Not much, but thinking about this comparatively discreet work relative to Alain Guiraudie’s Stranger by the Lake (another film about cruising locales near bodies of water with sinister overtones), which places its full-frontal penises unapologetically front and center, underlines how the film seems more pained than excited even at moments of character arousal. It’s kind of commendable how committed Hittman is to leaving Frankie’s friends boring hunks of flesh with no more wit or instinct than particularly slow-moving predators — not every character needs to be redeemed or likable, after all — but it’s a little dull. (The surprising moment of levity are Frankie’s periodic visits to a local vape shop, where pals prove virtuosos at ornate smoke rings. I finally get the appeal!) Per regrettably normal indie film form, the movie ends on a note of moral/plot irresolution: movies should make decisions about what they mean! There’s a lot to admire here — the carefully preserved verisimilitude of a world un(der)explored on screen, a nonjudgmentalism that avoids sexual or moral panic — but ultimately this feels like a missed opportunity.

Likewise Joshua Z. Weinstein’s Menashe, which delves into Brooklyn’s even harder-to-access Haredi community. It’d be innacurate to call this a hybrid, but the opening shot moves smoothly from documentary to fiction: a long (both distance/duration) shot of a sidewalk almost exclusively composed of Hasids in pedestrian transit eventually picks out one man strolling through and pans with him along his route. Menashe (Menashe Lustig) has a crappy job at the Empire Kosher Supermarket, suffering under the thumb of a manager who, in time-honored low-wage fashion, both overworks and underpays him while being rude. But Menashe has problems of his own making as well: following the death of his wife, he’s not allowed to be a single father, per Hasidic/rabbinical directive, but he can’t get it together fiscally or emotionally to find a new bride. His son is in his uncle’s custody until Menashe can get it together, but with the one-year anniversary of his wife’s death coming up, Menashe finagles a week’s worth of custody. Will he redeem himself? Will father and son bond? Will there be emotional ups and downs, ending on a carefully unresolved note yet again?

Menashe is frustrating because it takes hard-earned access, retains documentary virtues, and then dilutes it all via a screenplay that hits every beat exactly where you’d expect. (If a character who’s seemingly about to redeem himself and has had things going well for like eight minutes places some kugel in the oven and then leaves the house while forgetting about it, what exactly do you think is going to happen next?) It has the details at the fringes you could only stumble onto through sustained immersion that make it worthwhile: I was tickled by a panhandler whose specific Yiddish-language pitch is admirably shameless: “Don’t be an anti-Semite!” There’s a Jarmusch-y scene of bonding in the supermarket storeroom after-hours with the Hispanic staff, where 40s of St. Ides help everyone chill while second-language English establishes a tentative bond, and the sense of a clearly understood workplace is strong in general. And yet the narrative is too smoothed-out: what’s specific is mistranslated into the overly universal.