Thinking about Trump and Streep on Martin Luther King Day 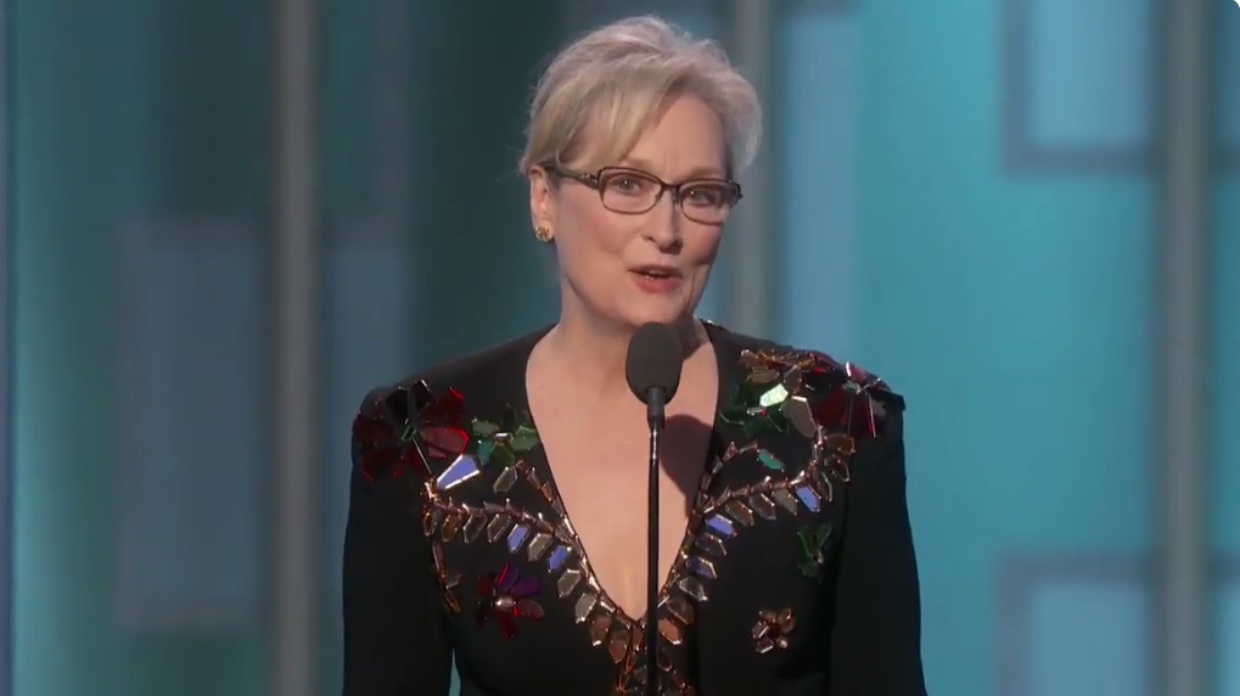 It’s not so hard to see how Meryl Streep is like Donald Trump. They share a taste for the ornate, the larger than life showy stuff. For every gold plated monstrosity that Trump has erected, there is a larger-than-life character Streep has chosen to play (“You have a script with a fatally sick socialite soprano who can’t sing? Sign me up!”) They both have an energy that is, as Trump might say, huge. And both of them can bully with their energy, wield their seemingly ageless and endless vitality like a dare, like a threat, like a weapon. Both of them often seem to be proving themselves, no matter how many Oscars and hotels glimmer with their names. Both broke out in 1978.

Often with both, we are sucked in, sometimes against our own will. Trump has come to be a symbol of so much of what has gone wrong with capitalism. And Streep, for all her genius, is often a symbol of what happened to great acting. Which is to say — it became a ridiculous competition that has little to do with art or emotional truth or subtlety and a lot to do with the acting Olympics (weight loss or gain, accents, transformations, crying scenes, redemption speeches.) With both, resistance feels futile. But, this being a democracy, resist we must. Resist conventional wisdom. Resist media conditioning. Resist what we are told is the absolute truth.

It’s possible that Trump became president largely to help Russia drill for oil and make a trillion more dollars. We saw All The President’s Men, we know to follow the money, this ain’t our first rodeo. Trump will say Putin is helping him reduce nukes, that the two of them are creating peace together, and then he will reward Putin by lifting the sanctions so that Exxon and Russia finally land their windfall. In order to do this, Trump will cancel the Paris agreement and uppercut an already nearly knocked out environment, effectively selling out not just his country but humankind. He’s Judas, William Randolph Hearst, and Nixon all rolled into one, with a smidgen of Mussolini for good measure. And yet, maybe if we don’t see that we are all a little like Trump in some ways, if we just demonize him, and talk about him as the other, we fall right into his trap. That’s his game. The more we see things dualistically like he does, the more he wins. It’s the walling-off game. It’s the “my problems are all external” game.

When Meryl Streep made her speech, maybe she didn’t see all the things she and Trump have in common. When that happens, the divide just gets bigger. The right can feel more alienated. The people who voted for Trump can feel more condescended to and get angrier. Hollywood can pat itself on the back as being woke, and then continue making most of their money by selling and sexualizing gun violence to kids. And while certainly we can’t be quiet in the face of fascism, we first have to see that it’s our own face. Trump is a communal manifestation of something very real, and none of us are separate from it.

So, yeah, when Streep made her finger-pointing speech, perhaps she didn’t see how much she is like Trump. And I’m like that too. It seems like half my time these days is spent on the phone talking to friends saying stuff like, “Did you see what this motherfucking sociopath just tweeted just now?” Or staying up late with my old man and us both talking about how Trump is so sick and so without self awareness and so broken. Like Streep, I find myself pointing my finger at Trump all the time. But then, maybe, I miss it. Maybe I miss what Martin Luther King was trying to show us. I miss Trump’s humanity. I miss my connection to him. I miss my own humanity.

If we see how we are like Trump, it doesn’t mean we don’t try to impeach him. It doesn’t mean we don’t try to hold him accountable for treason, dig up the facts. But it does mean that we see him as a person. And we see the people who voted for him as people. We gotta close the gap. No gaps. It’s a seamless universe after all. We can honor that reality by seeing our selves in each other and not externalizing and projecting what we don’t like about ourselves onto each other. This is not the place where Yin is on one side and Yang is on the other side. That’s a half-witted Hollywood movie. Trump sometimes seems like he’s doing his best impersonation of a cartoon bad guy. Well, all the more reason to bring nuance to the equation to balance it out.

When Trump sat next to Obama for the press, after years of questioning Obama’s birthplace, and running a racist campaign, it was hard not to notice that Trump looked like a little boy. He was nervous, slightly blushing, a little hunched over, speaking quietly, almost shyly, while twiddling his thumbs. He looked like a little boy in a room with a grown up. A grown up that he very much wanted to like him. And even if he never will say the word, he looked sorry. Apologetic. Maybe he was sorry for all of it. I thought of his old man, Fred Trump, who by all accounts was racist and hateful, a cold man. And for the first time I felt bad for Trump. And for a second, just a second, I didn’t push him away.