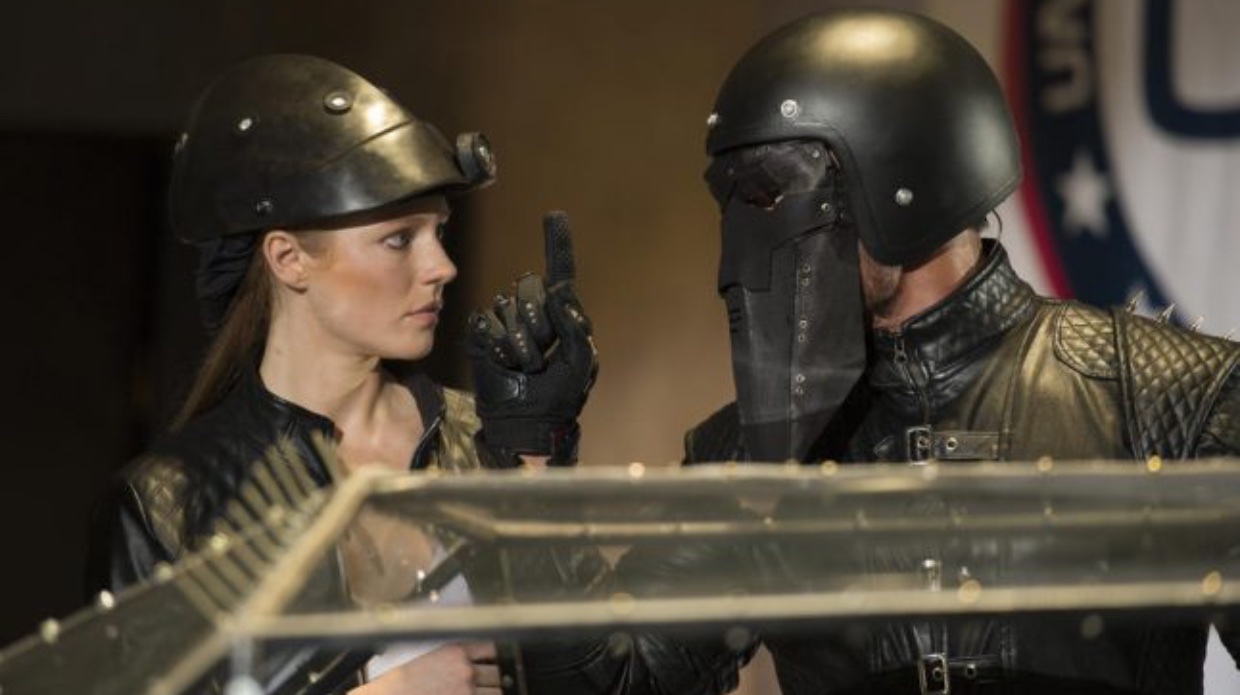 Paul Bartel’s 1975 road race movie Death Race 2000 is one of the great exploitation films of all time, a model of how to use the creative freedom of working with limited resources within a marketable genre for the purposes of subversive satire. Produced by Roger Corman, it has a deliciously nasty premise: in the (then) future, the population is kept pacified by gory reality entertainment in the form of a cross-country road race in which drivers receive points for mowing down pedestrians. Bartel and screenwriters Robert Thom and Charles Griffith milk this conceit for all that it’s worth, ramping up both the action and the social satire to delirious extremes. When Universal rebooted the franchise in 2008 under Paul W.S. Anderson’s direction, the idea of wiping out people for points – and a lot of other things – went away, and two subsequent straight-to-video prequels moved even further from Bartel’s original conception. Thankfully, with Corman himself credited as the sole producer (and wife Julie Corman on board as executive producer), the brand new installment, Death Race 2050, returns to the series’ roots – and in the process supplies the first really pleasant surprise of 2017.

The movie updates the original’s concept to a future in which there’s a 99% unemployment rate and the Death Race – in which the drivers whiz through towns with names like “Walmartinique” – serves as both escapism and population control. The “United Corporations of America” are overseen by a Trump-esque plutocrat played by Malcolm McDowell, and as the movie progresses director and co-writer G.J. Echternkamp steadily ratchets up the outrageousness to hold a hilariously bonkers mirror up to our depressingly bonkers society. Echternkamp and Matt Yamashita’s script is jammed with inventive satirical ideas, none of them subtle; the movie is a non-stop assault on good taste and mental well being, but there’s an underlying urgency to its provocations. The film is outrageous, but it isn’t just a case of a brash director showing off – the movie has style to burn, but it also has a brain, and a knack for knowing how to turn its budgetary limitations to its advantage. Instead of trying to hide the fakeness of its digital effects, it amplifies the artificiality, in the process coming up with the perfect visual corollary for the unreal-seeming times in which we currently live. Death Race 2050 is a reward for anyone who has spent countless hours watching disreputable exploitation movies in the hope of making a genuine discovery. Discoveries of the sort that used to exist in Corman’s heyday, when he was giving breaks to future auteurs like Martin Scorsese and Jonathan Demme, are rare these days, but Death Race 2050 marks a real return to form for its producer and provides countless pleasures for the discerning B-movie aficionado.

This week is a good one for cult movies in general thanks to The Film Detective’s Blu-ray release of The Black Dragon’s Revenge and a pair of “Vestron Video” titles from Lionsgate, Ken Russell’s Lair of the White Worm and Bob Balaban’s Parents. The Black Dragon’s Revenge is a pleasurably goofy martial arts film from 1975 starring Ron van Clief, a black action hero of the period in the Jim Kelly tradition. While Kelly was a bigger star thanks to better distribution (his films were generally major studio efforts while van Clief toiled away in the grindhouses), van Clief has an engaging low-key charm that’s all the more effective when contrasted with his dynamic athleticism in the fight sequences. The plot of The Black Dragon’s Revenge – something having to do with avenging the death of Bruce Lee – is pure silliness, but the action set pieces are terrific, and the movie’s blend of martial arts and Blaxploitation is irresistible. Lair of the White Worm (1988) is a better known and more “respectable” genre effort thanks to its pedigree (director Russell, source material by Bram Stoker, a first-rate cast including a young Hugh Grant), but it’s every bit as loony as the other movies I’m recommending this week; Russell uses Stoker’s tale of an ancient cult of vampires (built around the titular worm) as justification for multiple excesses, merging his own bizarre preoccupations with Stoker’s as smoothly as he took to Pete Townshend’s vision in Tommy. Russell originally offered the role of snake woman Lady Sylvia Marsh to Tilda Swinton, who evidently turned it down, but it’s impossible to imagine anyone better in the part than Amanda Donohue; slithering around the movie in a variety of dominatrix outfits, she’s clearly having as much fun here as McDowell in Death Race 2050, and she – just like the movie itself – is consistently hilarious.

Parents is a far more thoughtful and complex horror-comedy than Lair of the White Worm, but no less giddily entertaining for its more serious ambitions. Christopher Hawthorne’s savagely funny and genuinely unnerving script, set in the early 1950s, tells the story of a ten-year old boy whose unease around his parents (largely having to do with their sex lives) grows into panic when he becomes convinced that they’re cannibals. Randy Quaid and Mary Beth Hurt are flat-out terrific as the parents, and director Balaban – in his feature debut – carefully crafts one of the most original visions of suburban horror that I’ve ever seen. The dark side of 1950s conformity has been explored to death in both films of the time (Minnelli, Sirk, Nicholas Ray, etc.) and later (Haynes, Pleasantville), but Parents stands apart in its vivid, unsparing evocation of the most repellent aspects of Eisenhower-era consumer culture. Of course, the film, released in 1989, is as much about Reagan-Bush-era values as it is about Eisenhower…and, somewhat depressingly, it continues to resonate no matter the period in which one returns to it. Parents has never been available in a decent home video transfer before now and has continually gone in and out of print over the years, making the exemplary Blu-ray release (with commentary by Balaban and other special features) a cause for celebration.