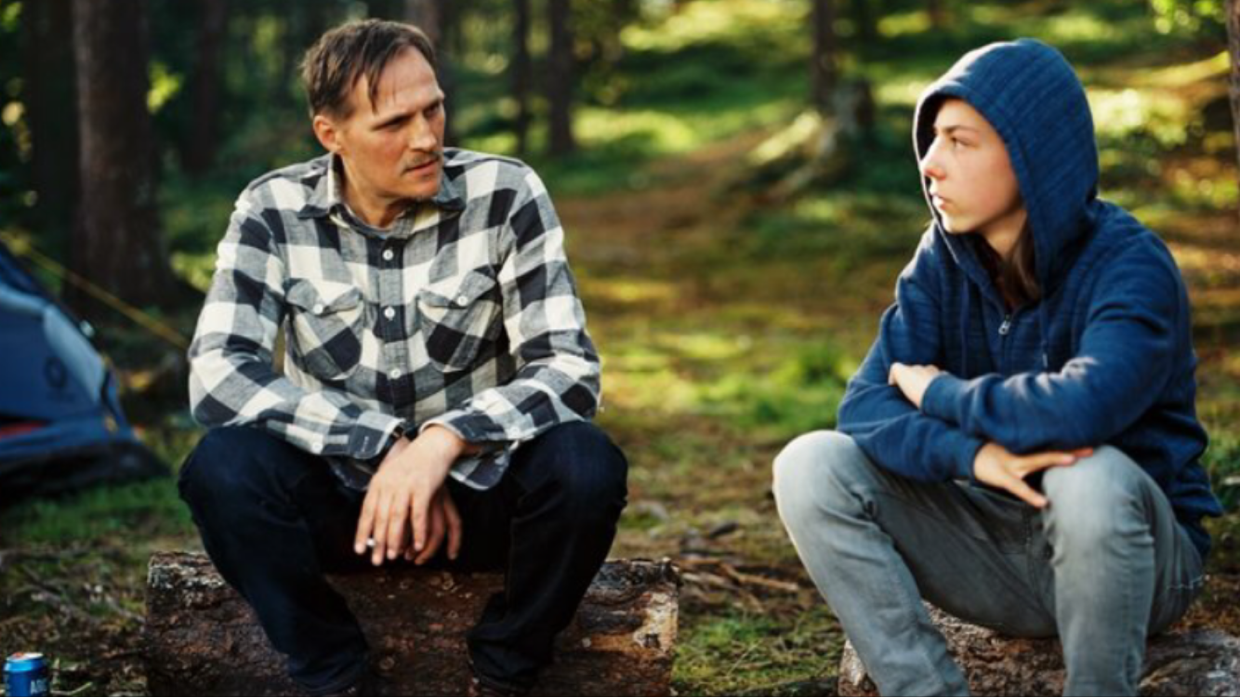 by Giovanni Marchini Camia
in Festivals & Events
on Feb 16, 2017

Thomas Arslan’s flaccid anti-Western Gold, which screened here in Competition four years ago, spoiled what could have been a brilliant hat-trick for the Berlin School alumnus following Vacation and In the Shadows. With Bright Nights he’s back in great form, once again showcasing his flair for precise, intimately scaled dramas. Like his compatriot Maren Ade’s Toni Erdmann, a quick synopsis of Arslan’s film makes it sound like standard feel-good Hollywood fare: after his estranged father dies, the protagonist Michael decides to try and reconnect with his own teenage son Luis, whom he barely knows, and takes him on a road trip, embarking on a journey towards reconciliation. Yet, also like Ade, Arslan actually appropriates common tropes, distilling their truthful essence in order to use it as a foundation from which to construct complex and affecting portraits of his two protagonists.

A series of short introductory scenes — a fraught conversation between Michael and his girlfriend about her potential move abroad for work; an equally strained phone call with his sister to inform her of their father’s death — establish Michael as a person used to erecting defences around himself, electing isolation over the risk of emotional vulnerability. The introspection precipitated by the combined news of his girlfriend’s potential departure and the death of his father, who spent the last five years of his life alone in a remote house in Norway, engenders an existential crisis, forcing him to question his lifelong stance and confront the hurt he’s caused by always keeping himself at a distance from others. The 14-year-old Luis is his chief victim in this regard and their drive through the majestic landscapes of northern Norway following the funeral represents Michael’s quest for atonement.

The premise of someone thus crippled by guilt is familiar to the point of cliché, but Arslan’s treatment is exceptionally understated, and all the more effective for it. Compare Bright Nights to a film like the monstrously overhyped Manchester by the Sea, which eroded its narrative’s impact through excess – why is it necessary for a man to get drunk and kill his three children in a fire to introduce a theme as universally relatable as regret? Arslan avoids all such extravagance in favor of careful observation and a very gradual accumulation of meaning. A lot of the drive occurs in silence, as Michael’s attempts at engaging the sullen and understandably embittered Luis are met with constant resistance. Both actors give extremely nuanced performances and the dynamic between them is never less than engaging, so that any breakthrough, regardless how minor, comes off as a triumph. Arslan is not presumptuous enough to pretend a single vacation can fix a life’s worth of neglect and his eventual refusal to offer a clear-cut resolution to his story is a gesture of genuine generosity, towards his characters as well as his audience.

It’ll be almost impossible for most to fully appreciate the delicacy of the opening fifteen or so minutes of the Competition entry A Fantastic Woman by Chilean director Sebastián Lelio, as any description of the film, no matter how succinct, can’t help but give away a crucial piece of information (readers intending to experience the film as intended by Lelio should stop right here and also avoid reading other reviews or synopses before going to see it). The detail in question is that it’s a story about a trans woman, though Lelio delays revealing this through misdirection. A Fantastic Woman opens with Orlando, a man celebrating his 57th birthday by taking his younger girlfriend Marina out to dinner before they return to his apartment for the night. He then feels ill and they rush to the hospital, but the doctors are unable to help him and he dies. It’s only when the police arrive and ask for Marina’s ID that the viewer finds out she’s transgender. It’s an effective and perfectly executed gambit, since no one would suspect this aspect of Marina’s sexual identity, yet once it’s disclosed, the immediate shift in perception forces a discomfiting confrontation with one’s own prejudices.

The rest of the film charts Marina’s struggle to claim her right to grieve from Orlando’s family, primarily his ex-wife and adult son, who are openly disgusted by her and want to prevent her from having any part in Orlando’s death, be it attending the funeral or receiving her part of the inheritance. A remarkable level of perceptiveness distinguishes most of the script, particularly the dialogues. In almost every conversation, Marina’s interlocutors are either offensive – both deliberately and obliviously – or treading on eggshells, which isn’t necessarily better, as their resolute intention to show how tolerant they are actually translates into condescension, perpetuating Marina’s status as a deviant. Every time the word “normal” is uttered, regardless of whether in hate or misguided solicitude, it’s as if she’d been dealt a blow. Trans actor Daniela Vega plays Marina to perfection, ably expressing the toll of constant oppression through her weary countenance and powerfully conveying the taxing existence the transgender are made to lead in a society that for the most part has yet to properly recognize their humanity. Although Lelio’s film specifically addresses the widespread intolerance in his homeland, its implications can be extended to virtually every country across the globe.

Lelio’s approach is not without faux pas, however. Particularly problematic are several instances that encourage the viewer to guess whether Marina has transitioned or not. It’s strange that this should keep coming up, especially considering that at one point a character asks her whether she’s had the surgery, and she snaps back, “Don’t ask me that.” If Leilo and his co-scriptwriter Gonzalo Maza are aware that such questioning is inappropriate, then why set up scenes like the one where Marina’s forced to undergo a physical examination by the police? Extremely distressed, she undresses in front of the police investigator and a doctor while the camera frames her just above the waistline. Then, as she pulls off her underwear, the film cuts to a reaction shot of the doctor with a look of surprise on his face. This and a number of other similar scenes constitute regrettable oversights in a film otherwise marked by tact and empathy.