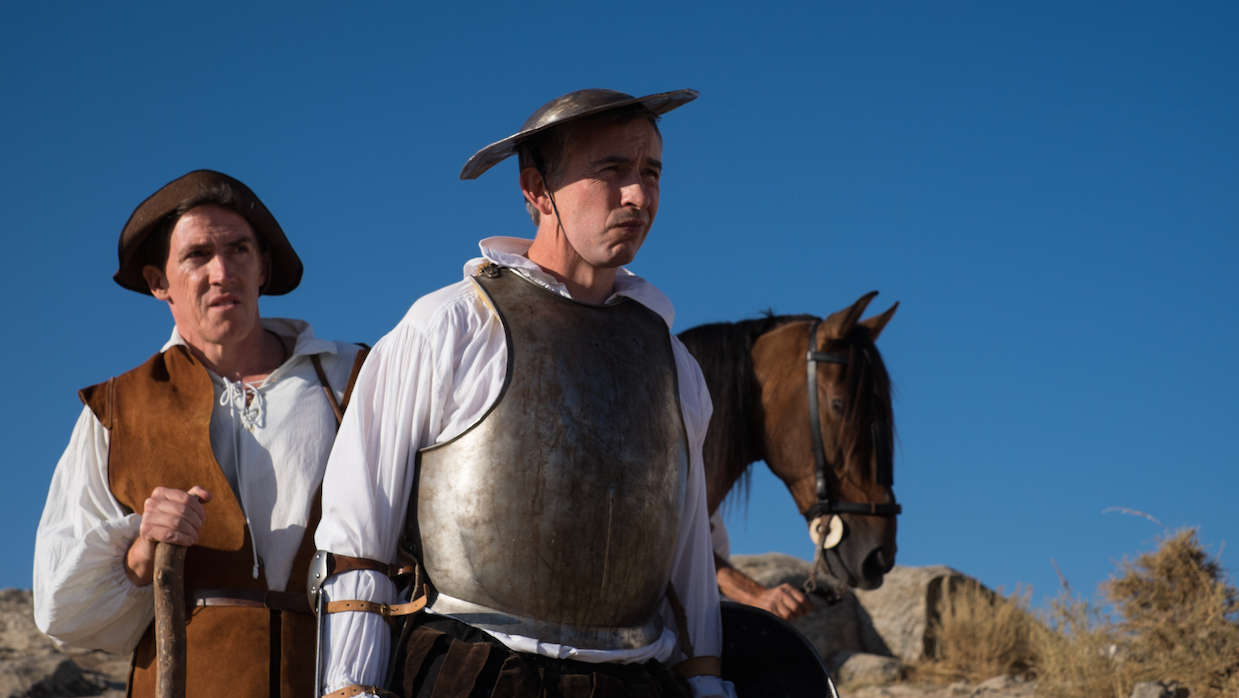 Rob Brydon and Steve Coogan in The Trip to Spain

Ever searching for an identity, the Tribeca Film Festival returned — for a 16th time last week — to Midtown, the Upper West Side, Chelsea and, yes, the neighborhood for which it’s named. These days the festival never opens with a genuinely great (and thematically appropriate) film like Paul Greengrass’s United 93 or a goofy overstuffed blockbuster like J.J. Abrams’s Mission Impossible III, but usually with a low-key doc centered on iconic New York stuff: comedy (Bao Nguyen’s 2015 SNL doc opener Live from New York!), fashion (Andrew Rossi’s The First Monday in May, which opened last year’s edition) and music — the Nas doc which opened the 2014 edition or Chris Perkel’s Clive Davis: The Soundtrack to Our Lives, which opened this year’s. David Leitner has already described the scene of opening night I thankfully avoided, so I’ll spare you. The festival really starts the following day anyways, when the non-hagiographies begin to appear.

On Thursday I caught premieres of two films and neither disappointed. In the U.S. Narrative Competition, which only features world premieres, Junebug screenwriter Angus Maclachlan — who was at the festival three years ago with his directorial debut, the excellent Paul Schneider vehicle Goodbye to All That — is back with an equally compelling vision in Abundant Acreage Available. Centered on a small family tobacco farm, the movie opens with a remarkable bit of mise-en-scene: a woman, who we quickly realize is the always reliable Amy Ryan, enters the frame, a country vista at midway, and immediately begins digging a hole. We soon learn that it is a grave for her recently deceased father, one that her born-again Christian brother (the criminally underemployed Terry Kinney) doesn’t want her to dig; he wants to bury their Pa’s remains in the surrounding forest, near their other ancestors, and not with some “negro preacher” presiding over it. Ancestry and its role in shaping our destinies comes to the fore as a major theme in this delicate, beautifully acted drama when the siblings discover three geriatrics, one of whom seems near death, camped out on their property at the end of the opening sequence.

What follows between these five people in a tucked away corner of rural North Carolina is deeply unexpected and moving, as we slowly glean that at least two of the three brothers have come to this land, which once belonged to their wayward father, to die. The film proceeds in long, patient scenes; Maclachlan, who began as a playwright, prefers to generate meaning in the shot as opposed to the cut. Kinney, so wonderful in the late ’90s as the lead on Oz, gets right to the soul of a man who, in the story of how these unexpected visitors lost their childhood home, finds echoes of his own tragic past. His scenes with Ryan, as the siblings war over what to do about these newfound visitors, rips open the thinly concealed patriarchy that dominates so much of American life. It would be a shame if no adventurous distributor steps up to find audiences for this movie; it’s exactly the type of picture many pockets of rural America would likely flock to, if only some apparatus existed to get it to them.

The Farthest, from director Emer Reynolds, had its international premiere the same evening. It focuses on NASA’s Voyager mission, one which has brought the first man-made object to interstellar space. It doesn’t reinvent the wheel with its handsome use of talking heads, CGI, animation, photos and archival footage. At 120 minutes, it overstays its welcome a bit. But the movie builds a compelling case that the Voyager — which contains a golden record that holds much of the world’s most powerful music should some creature from another galaxy ever find it and wonder what we’ve been up to on this rock — is among human history’s most significant undertakings. One gets the sense watching this film that the ambition, wonder and optimism of the America that launched Voyager One into deep space has passed into history along with much of the late Chuck Berry’s music.

Returns were not quite as strong among the U.S. competition narratives on Friday, but more sanguine on the doc side of things. Thirst Street, the new picture from Nathan Silver, has a glossy new look for his work — remarkably, the director’s seventh since 2009 — and a sultry new Parisian locale. Like his last movie, the 2016 hybrid Actor Martinez, it stars Lindsay Burdge, this time as an airline flight attendant who becomes romantically obsessed, perhaps dangerously so, with a Parisian bartender in the aftermath of her boyfriend’s suicide. The movie is high on baroque stylishness and low on psychological weight but Burdge, one of the American indie scene’s most consiently compelling performers, carries the film pretty far. While it will be compared, perhaps unfavorably, to Matt Spicer’s Sundance screenwriting winner Ingrid Goes West, which also features a similarly self-deluding and somewhat unhinged female protag with a taste for keeping up appearances, Thirst Street should find plenty of international fest play (Silver is popular among the NY-Locarno-Venice art film tastemaking cinerati) and this film certainly broadens his bag of tricks.

In American dancer Bobbi Jene Smith, director Elvira Lind has found a fascinating subject; her competition documentary Bobbi Jene world premiered earlier that evening. The film uses incredibly intimate, often quite lyrical verite shooting strategies juxtaposed with the occasional archival news interview to follow the title character — long one of the premiere dancers for the Tel Aviv-based Batsheva dance company — as she decides to journey back to the states and begin dancing and choreographing on her own. This professional story is juxtaposed with a personal one about her break up with storied Batsheva choreographer Ohad Naharin and the newfound love she finds with Or Schraiber, a fellow dancer whom Smith chooses to leave behind in Israel. The movie gives you a really detailed sense of the work that goes into top flight dance choreography and Smith is an alluring and unusual character, by turns elegant, circumspect and humorous.

Also premiering Friday night was Lana Wilson’s stunning The Departure. Wilson, who with Martha Shane made the poignant and underseen abortion clinic documentary After Tiller, set off to Japan to profile Ittetsu Nemoto, a Buddhist priest with a rebellious streak. We first meet Nemoto, formerly a punk rocker, at a throbbing, strobe-lit night club during a credit sequence that announces cinematographer Emily Topper as one of the festival’s real finds. He has gained fame in Japan as a successful suicide counselor in a country which has a long cultural tradition of taking one’s own life. When he is stricken with heart disease, Nemoto, who is settling into domestic comfort with his wife and child, finds himself at a crossroads. Who will be there to help him as he has helped so many others? The movie probes this man’s fascinating life with a graceful ennui that is fitting for the subject matter and more than its fair share of superior lensing.

Saturday saw the premiere of Sierra Pettengill and Pacho Velez’s The Reagan Show. The 40th President was a middling mid-century screen presence but he was clearly a great actor when his biggest stage, the American Presidency, called for it. This film could, of course, never satisfy everyone; perhaps it speaks to just how fascinating a window into Reagan it provides that you keep wanting more than it can possibly deliver by the time its credits unfurl. While the all-archival marvel could have used more Iran-Contra and John Hinckley, it was as clever and breathtaking a look at the performative aspects of our politics as any film made in recent memory, and perhaps ever; it deserves a big audience when CNN airs it in the fall.

The most fun I had all weekend was at Michael Winterbottom’s The Trip to Spain. Once again British comedians Steve Coogan and Rob Brydon drive around some picturesque slices of European countryside, eating tasty-looking food and trying to one-up each other with dead-on impersonations of actors more famous than they are. Spain isn’t as bitingly funny as the original and the formula is pretty much stuck to in this one, despite a somewhat gonzo (and perhaps culturally insensitive) ending. Glorious renditions of Sean Connery or Michael Caine — showstoppers in the previous Italian installment and original — have encores here that don’t reach the heights they did previously but also don’t fall flat. There is, of course, still the juxtaposition of Coogan as a player with a conscience and Brydon as the mostly happily married family man. While not deepening the material at all, this outing still provides a satisfying, occasionally hysterical window into the mechanics of constructing improvisational comedy from the ground up. And it’s always hard to knock people, especially Coogan, who are so willing to throw themselves under the bus.

Two docs that center — directly in one case, obliquely in the other — on the era of Black Lives Matter and greater awareness of predatory policing premiered Sunday. Both Camilla Hall’s Copwatch and For Ahkeem, by the team of Jeremy Levine and Landon Van Soest, are earnest, honorable and well-intentioned attempts by white filmmakers to grapple with some of the most persistently painful aspects of American negro life. The former, which had its world premiere Sunday afternoon, centers on Ramsey Orta, the man who filmed the killing of Eric Garner, as well as several others, including a man who filmed the arrest of Freddie Gray and another who was inspired by the shooting of Oscar Grant to Copwatch. The later, which made its North American premiere later that night, is about a young black woman, Daje Shelton, who is expelled from high school in Missouri and enters an alternative program for at risk youth, Innovative Concept Academy, as the drama surrounding the killing of Michael Brown consumes her community. Neither is quite as moving or angry as their subject matter suggests they might be. Although For Ahkeem features remarkable technical credits in the hands of cinematographer Nicholas Weissman and editor Lily Henderson, one couldn’t help but ask what the nature of the collaboration between these white filmmakers, blissfully aesthetizing these lower working class negro environs, and the black subjects were. One day, I hope a white filmmaker making a movie about an at risk or underprivileged minority would bring the same questions around formal intent and authorship to their aesthetic that Robert Greene brings to Kate Plays Christine or Michal Marczak brings to All These Sleepless Nights; seeing the interactions between the people behind and in front of the camera on a movie like this would be, I suspect, just as revelatory as the story the filmmakers choose to construct out of these black lives. Ones which, of course, any sane person knew mattered long before it was fashionable to say so in public.