“Can You Make All Your Money Back Just Showing on TV Every Mother’s Day?”: John Waters on Serial Mom 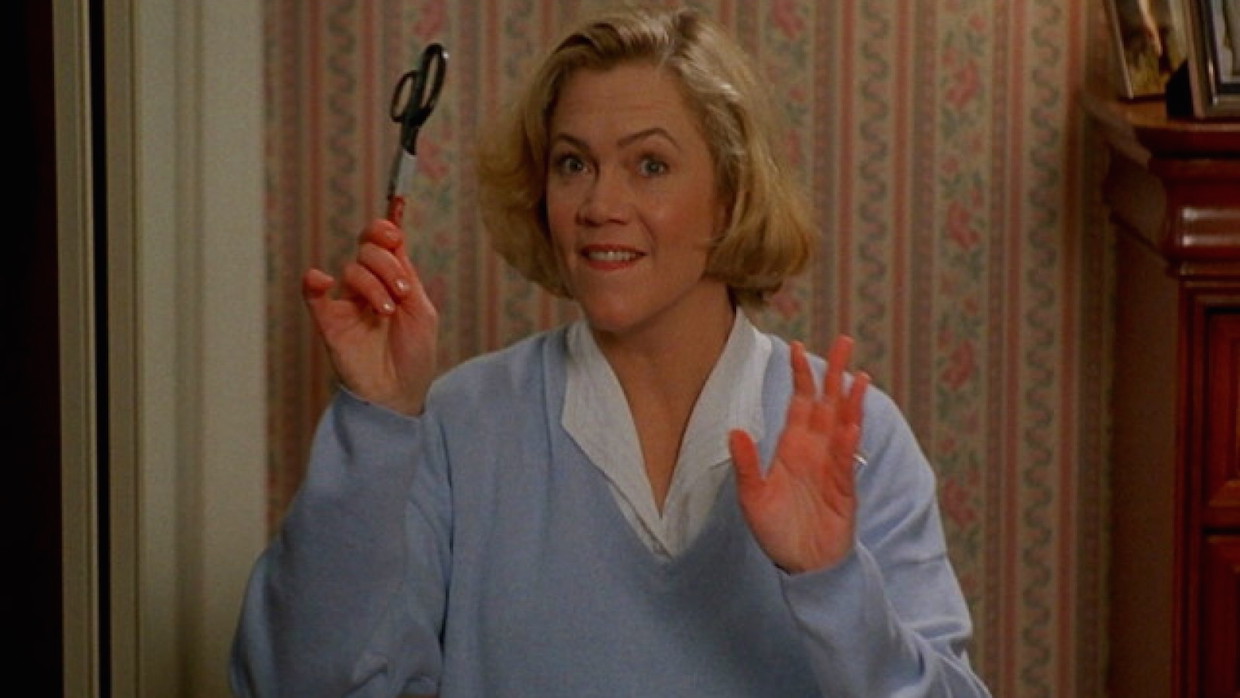 by Jim Hemphill
in Columns, Directors, Interviews
on Apr 25, 2017

The last couple of months have been good ones for John Waters fans. Last month Criterion put out a gorgeous restoration of the director’s first truly great film, Multiple Maniacs, and on May 9 Shout Factory is set to release Serial Mom, a movie Waters made 24 years after Multiple Maniacs with the full resources of Hollywood at his disposal. A hilariously provocative riff on the true crime genre, Serial Mom follows suburban wife and mom Beverly (Kathleen Turner) as she’s driven insane by everything from loud gum chewing to women wearing white after Labor Day; a pristine overseer of a pristine household, Beverly’s obsession with moral and aesthetic perfection collides with her secret fascination with serial killers to turn her into the murderous housewife of the title. Turner gives a knockout performance in a film filled with them – Sam Waterston as her husband and Matthew Lillard as her horror movie loving son are terrific too, as are Waters stalwarts Mink Stole and Ricki Lake, among others – and Waters skillfully modulates the acting, production design, and cinematography to heighten reality without contradicting it. Viewed today, one of the most shocking things about Serial Mom is how prescient it was when it came to where American culture and the media were heading. Uncompromising in its savagery yet peculiarly sweet and affectionate toward its characters, it’s vintage Waters – the bigger budget and demands of the studio system do nothing to dilute his sensibility, which is in fact expressed in its purest form here thanks to the fact that for once the director had the time and money he needed to fully realize his ambitions. I spoke with Waters a few weeks before Serial Mom’s Blu-ray launch.

Filmmaker: I know you’re a serious cinephile, and I’m curious where you start when conceptualizing a movie like Serial Mom. Do you start with film traditions you want to riff on, or does it grow out of an obsession with true crime, or what?

John Waters: Well, I usually think about what genre I want to satirize, because that’s what all of the films are in the end. Mondo Trasho was a shockumentary, Multiple Maniacs was a gore movie, Pink Flamingos was a midnight movie, Female Trouble was a true crime movie, Desperate Living was a fairy tale, Polyester was a gimmick movie, Hairspray was a dance movie, Cry-Baby was a musical. Serial Mom was another true crime movie, then Pecker was an art film, Cecil B. Demented was a terrorist movie and A Dirty Shame was sexploitation.

Filmmaker: What’s interesting to me about Serial Mom is how undiluted it is even though, along with Cry-Baby, it’s one of the only times you made a movie within the Hollywood system.

Waters: From Cry-Baby on I always had development deals with the studios, right up until Dirty Shame. I would go in, pitch the idea to the studio, and they would own it. Sometimes, including Serial Mom, the movie would go into turnaround and move from one studio to another, but they all ended up getting made. Kathleen was definitely who got Serial Mom green lit. As soon as I heard she was interested I ran up to her house and met with her before she could change her mind. I wanted to let her know that even though I wrote this I wasn’t completely out of my mind, and that she might have heard of Pink Flamingos but this wasn’t that – it was definitely a studio movie. She was taking a chance with me, but at the same time, she’s made some really crazy movies over the years—

Waters: Exactly, and some crazy TV and stage shows. She was looking for something she hadn’t done before, and she was very happy because I wanted Sam Waterston to be in it. Then she was great with Mink and other people that had worked with me over the years. It all worked out great. You just don’t leave movie stars alone on the set and everything’s fine. She was a team player and she inspired everybody because she’s such a professional. She made everybody better, including me, because we all rose to the occasion. Mink and Kathleen are still friends.

Filmmaker: It’s kind of a crazy mix of people, using your stock company and then throwing somebody like Sam Waterston in there. How did he adapt to your sensibility?

Filmmaker: What kinds of conversations do you have with the actors about tone? Because it’s very tricky in your films.

Waters: I used to tell everybody to never wink at the audience, play the dialogue like you believe every single word, no matter how ludicrous.

Filmmaker: Well, you even have those cards in Serial Mom presenting it as a true story, so…

Waters: People really believed it was real – a lot of people. They said, “Well, what happened to her? Where is she?” It was set up to be believable in a way, and today they might even believe it more because there’s so much of that kind of thing on television. So many true crime things are reenacted.

Filmmaker: The production design in the movie is incredible, and it’s by the same guy you’d been working with since Multiple Maniacs, Vincent Peranio. How was it different working with him on a bigger picture like this?

Waters: The first thing he ever did for me was the lobstora in Multiple Maniacs. Serial Mom was the first time where everything was built – it was shot in a big warehouse where we had all the interiors of Beverly’s house. It was also the first time where he had to make it look kind of real – all the other movies were in a fantasy world of lunacy, but this one took place in the real world.

Filmmaker: It’s quite beautiful visually. Did the way you approached the design change over the years?

Waters: I would say that the more my career got together the more I planned things out. I didn’t even know what a shot list was when I made Multiple Maniacs. But later on I got pretty organized; you’d think I’d be the opposite, but you have to make your day and as I went along I certainly got better at it.

Filmmaker: Something else you presumably didn’t have to worry about on your earlier films was the studio test screening process. How did that go on Serial Mom?

Waters: It was horrible. The studio hated it even though it was exactly the script they had bought, and Liz Smith, of all people, saved us because she wrote a column saying, “leave Serial Mom alone.” I think Kathleen went to her when the studio was trying to change stuff. They were furious, and it was the worst experience I had with a studio. The movie eventually came out the way I wanted it but they probably did lose money, so they were probably right from their angle. They wanted me to add a narrator, which is always a sign of a bad test screening. They wanted to change the ending and have her convicted, and they wanted me to shoot that and test both endings, and they said, “Or else you’ll never work again in this town.” I said, “Well, if we do it that way, I’ll never work again in this town anyway, what difference does it make?” But you know, they green lit it and I’m grateful and very happy with the movie, so I don’t ever name those people – anyway, they’re all in this Hollywood gang together and they don’t take me very well. But the movie’s out there, and it’s gone through so many different owners and moved from studio to studio, and it just came out again so somebody liked it. Over the years it’s gotten more and more accepted, and – I don’t know, can you make all your money back just showing on TV every Mother’s Day? That’s where it ended up.

Filmmaker: One of the touchstones in Serial Mom is the work of Herschell Gordon Lewis, which is referenced repeatedly. How did he influence your work?

Waters: I saw his movies at drive-ins when I was young. I had quite a life at those drive-ins – I got arrested because I used to forget to take the speaker out and I’d rip the pole out driving off in my parents’ car. Later I got to meet him and we stayed in touch, and since the character of Chip in Serial Mom worked in a video store and was a gore hound, I thought it would be fun to use footage from Herschell’s movies. I still saw him later in his life, and he was still complaining about shooting more than one take. And last year I played a horror convention and had dinner with him six months before he died. He was elderly but he was in good mental shape, he was fine. He died in his sleep but with no gore.