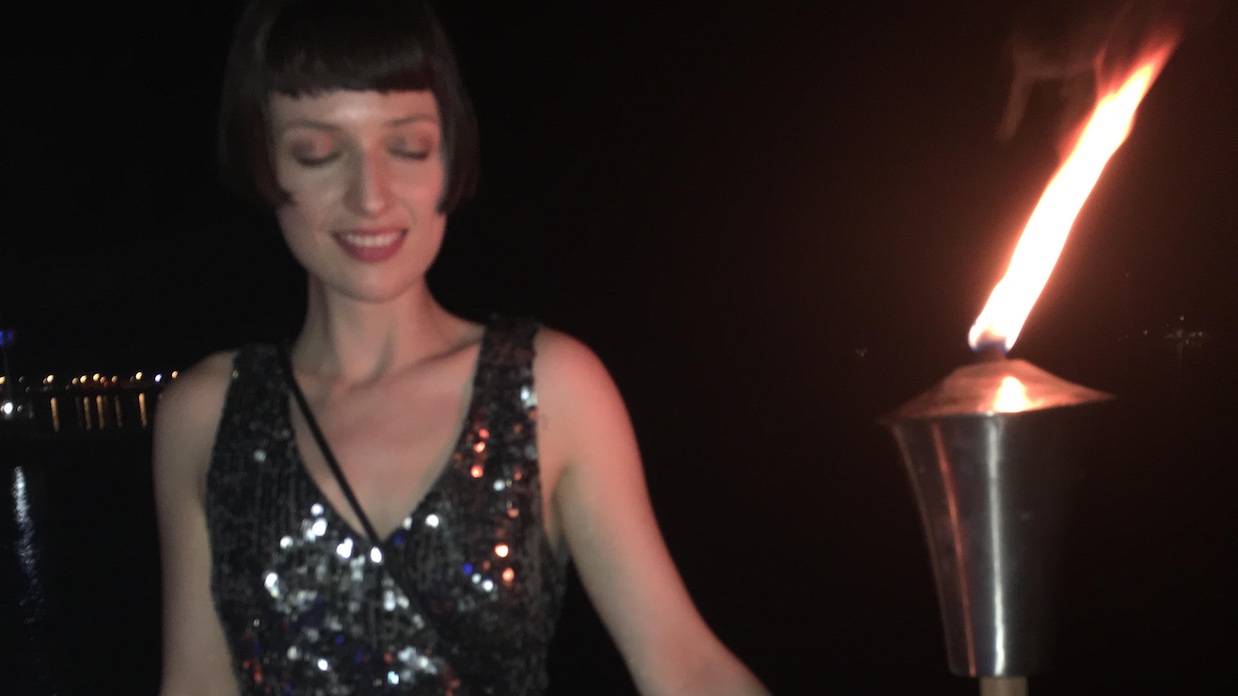 Director, screenwriter and boatbuilder (!) Sam Kuhn is in Cannes premiering his short film, Möbius — described as “a moth-eaten tale of magic and mutation half remembered by a teen poet who’s beloved lies lifeless in a stream” — in Critic’s Week. Filmmaker asked Kuhn, who hails from the Pacific Northwest, to keep a diary of his experiences, which rapidly went from jet-lagged to deeply strange. Here is his sixth entry; click here for them all.

Eight and it’s full circle, which seems fitting as “8” is a basic Möbius-like shape. Woke and walked immediately to the “morning after” bruch which I should’ve known no one would attend. Afterwards a photoshoot between two large house plants with the actors. We’ll see how that one turns out. Well then lunch, lunch with all the filmmakers, and I sat once more by the team who made Best Fireworks in the World, no doubt the best of the fest. This was confirmed later at the awards ceremony when they won the Canal+ prize, a well, well-deserved win. At the after party the director said she feared I’d be jealous and curse her with Black Rock but god knows that’s not what Black Rock is for. It’s funny, everytime I’ve entered a building here with the copious military security and metal detectors (all hail our nouveau age of international terror!) I have been questioned about the energetic nature of Black Rock, informed I could use it to murder someone by hurling (they don’t know my never-played-baseball arm) and then allowed to take it into the venue. Super safe egalitarian system — glad to know they let white people in with potential murder weapons. But this is a tangent. When you’ve been the recipient of so much love and attention how can one rightfully ask for more? Who cares we won no award? As Herzog once said, “Awards are for horses.” Real satisfaction has come in the new friendships. As per the Tao: success is more dangerous than failure. Best to be moderate, ride the middle, count the blessings.

Quite frankly I couldn’t be happier with how it all shook out. I had a meeting earlier in the day with a producer in London, all dressed in blue whose company had produced Blue is the Warmest Color. Blue is not the warmest color, but nonetheless he was a man of great warmth and invited me to take a journey with him into the next stage. I’m standing now on the shores of my future, endlessly inspired for all to come. I own a suit and a tux for the first time in my life, which I do plan on wearing as much as possible. Simple actions like walking to the beach with a beer take on otherworldly glamour when you’re doing it in a tux and tie. I’m now reminded of all the scenes in movies where characters are fish out of water in the black tie ball — Jack sauntering down the stairs to the upper-class dance in Titanic or Jack in The Shining wandering that luminous red ballroom for a drink. Al Bowl.y’s “Midnight, the Stars and You” haunting this mysterious starlit realm that seems to bridge through time. Who can know why it’s always a Jack? It’s good to know when to hang the hat, when the day is done, when to close shop and rest eyes. And so we went to a karaoke joint and all harmonized as Producer K lead us in a tremelous rendition of Roy Orbison’s “Crying.” I can still hear the producer that made Möbius, his tender voice crying out: “I was alright… For a while… I could smile… For a while….” As he sang, his mouth became a yellow beak, white feathers ruffled out of his pale skin, eyes looked like thieves, his crooning became crowing. We were all flying high above le Croisette wing tip to wing tip. As the sun did rise we cried seagull tears, smiling at the ocean of transformering capitalist garbage peppered by small pearls of pure dreams come true.