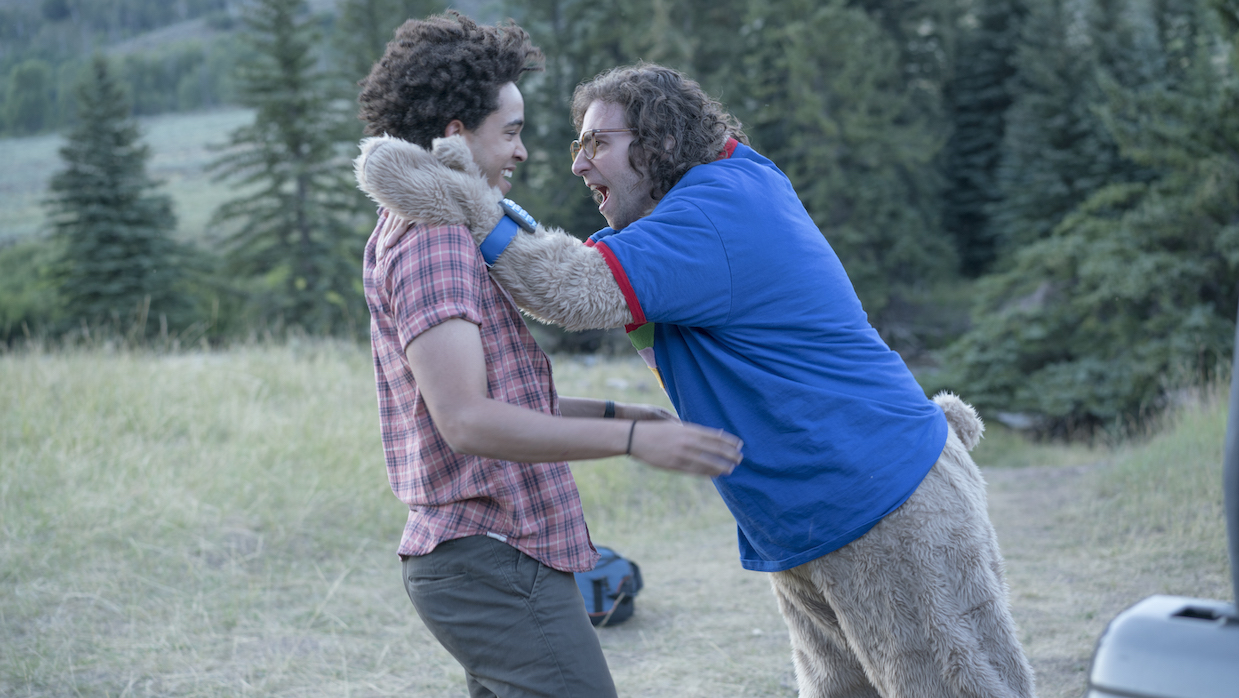 by Meredith Alloway
in Directors, Interviews
on Aug 2, 2017

If you haven’t watched Kyle Mooney’s early work, you’re missing out — it’s a healthy crop of innovative character work made with comedy group Good Neighbor. Mooney has also, along with fellow members Beck Bennett and writer Dave McCary, brought some of the best sketches to SNL in years. There’s the Kanye vs. Kyle bit and Mooney’s romance with Leslie Jones; often the best sketches are the ones that are cut for time (Ryan Gosling is a gem). When it was announced that Mooney and McCary’s first feature film, Brigsby Bear, would premiere at Sundance, there was anticipation around how they would translate their short form comedy chops and character work to long form.

The film, directed by McCary and written by Mooney and long time pal Kevin Costello, follows James (Mooney), a grown man who’s obsessed with a TV show called Brigsby Bear. He has all the VHS tapes, the bed comforter, the TV shirts — he’s a super fan. When he finds out that in fact his “parents,” played wonderfully by Mark Hamill (yes, the Hamill) and Jane Adams, kidnapped him as a baby, he’s thrust into the real world where there’s a new family and no Brigsby. The film delicately, and with superb humor, follows James as he tries to exist in a world with teenagers, parties and the chance to make his own Brigsby movie.

It’s not often we get such an unabashedly nostalgic film — and one that’s not trying to be kitsch. The story is laser focused on its main characters and their unique, even if often melancholic, ambitions. By doing so, the film avoids dipping into sap and with such a great cast, Greg Kinnear and Michaela Watkins particular standouts, it’s elevated it into an effective coming of age portrait. If Stranger Things is any testament, amidst our country falling the fuck apart, we’re clinging to the feel-good and honest films we grew up on — ones which are rarely financed anymore (hence, the reference to a TV show).

Filmmaker sat down with Mooney to talk how making the film with such a tight knit crew — they all grew up together — influenced the creation of such a unique story. It’s also Mooney’s first venture, and a big one, into film after doing short form for so long. He speaks to the psychology behind much of his character work, James included, and the parallels between himself as a filmmaker and the film itself— nostalgia for the meta.

Filmmaker: I love this movie. It’s so tender hearted and reminds me of films I grew up watching with my dad. So thank you for making something that’s so wholly positive. I don’t know if that was your goal going into this?

Mooney: That’s very sweet of you to say. The goal initially, in a very broad sense, was just to make a movie. I had this seed of the idea a few years ago and pitched it to my friend Kevin Costello, the co-writer, and throughout the writing process and developing the character it became a sweet thing, you know? I had no idea that it would become that, or that would be a fun takeaway for people. Obviously this movie could be a very dark film.

Filmmaker: Totally. I think it’s fascinating that you made this with friends you’ve known since 4th grade. You and Dave were class clowns?

Mooney: Yeah, you know, [Dave] was in the popular class, and making all of those kids laugh. I was in the nerdy, science type class, building solar ovens and making those kids laugh. Famously, one time before school started, all the classes would line up and he would tell these funny stories — that was his thing. He would make up these stories about his life. They were always not true and weird, like I was born in the mountains of Appalachia, and I had 14 brothers and sisters, which to a ten-year-old was insanely hilarious. He was telling one of these stories to a group of people and I tried to walk into the circle to listen, and he was like, “No, Kyle, actually you can’t listen.” So I had to work my way into the friendship and the relationship, but over time. Dave hates when I tell that story.

Filmmaker: He says, “I’ve loved you from the beginning!”

Filmmaker: I’m interested in this idea of nostalgia, because I feel like the film is based on that feeling, and James being obsessed with nostalgia. How did it influence making this film?

Mooney: I am, generally speaking, a very nostalgic person. I have all these video cassettes at my house and Disney posters, Alpha posters, McDonald’s Happy Meal toys in my apartment. I think it’s all in an effort to get back to a feeling when you were happy or carefree, or when there was so much wonderment in the media you consumed, or toys you played with. Whatever those video covers at Blockbuster were when I was 7 years old, somehow they made some drastic impression on my brain. I can’t shake it, and constantly want to revisit it.

Filmmaker: That’s the basis of James’s whole character. Tell me about crafting him and your process.

Mooney: I was fortunate in the sense that I wrote [the script] with Kevin, so a lot of that process was just him and I in a room together riffing. I was constantly rewriting it and finding the voice of who this person was. Certainly there are elements of me within it. We just enjoyed the idea of exploring things that [James] had never interacted with or explored himself. I guess in terms of the positive or optimistic nature of him, that just came naturally. I don’t think we wanted to make this a hateful thing. I think generally we don’t in most of our work.

Filmmaker: He’s like a lot of your characters. Your “Sporty” and “Lakers Champions” sketches — these kind of people who don’t understand social norms, but they’re also braver than I am, in a way! I don’t know if you find a throughline in a lot of characters that you do?

Mooney: A lot of them, I think, sometimes are kind of lying to themselves in some way or another, or lying to the world. They present themselves as confident — like this “Sporty” character, for instance, is acting like he knows a ton about sports, but in reality clearly doesn’t.

Filmmaker: So they know that they’re lying?

Mooney: I think so, yeah. But it’s a natural characteristic; we’ve all done that to some degree, when you pretend to know about something just for the sake of sticking to a conversation, or because you’re at a party. Rather than be the weirdo who hasn’t seen Shawshank Redemption, you’re going to pretend that you have.

Filmmaker: That’s interesting. I do feel like a lot of your characters are similar, and I was interested in hearing your psychology behind them.

Mooney: A lot of it is twofold. One is observing persons around us or that we grew up with, maybe the types of characters that don’t get a lot of representation in comedy videos or something like that, that to us are interesting or funny or fascinating. A lot of times it just starts with a weird voice we’d do around the house.

Mooney: Dave and I used to live together. We lived together in multiple houses in L.A.

Mooney: I’m sure to other people walking in, [it was] probably pretty obnoxious.

Filmmaker: You also have Mark Hamill, Greg Kinnear, Claire Danes and Andy Samberg as part of the cast. Can you tell me what you learned working with everyone? Did you cherry pick things you’d take to the next film?

Mooney: Greg, for instance, is such a phenomenal actor, and incredibly funny but also so real. He would do a lot of business, but not just business for the sake of business. There was a scene where he’s eating lunch, and [James is] pitching him the idea of working on [making the Brigsby Bear film]. He’s eating, popping open a Coke bottle, taking a bite of his sandwich, and we’re making a movie, so he was to recycle this action every single take. It’s stuff like that that I’m too scared to even attempt, because I’m not going to be able to pop open a bottle correctly. That sort of thing — just observing is so helpful.

Filmmaker: It’s very Stanislavsky. Just be where you are.

Mooney: That’s how people interact, so it’s nice to get a reminder sometimes. We’re trying to do a real representation of how human beings are.

Filmmaker: What was the most difficult thing about this as an actor? You wrote the script, then you just have to show up and be James.

Mooney: Not only did I want to do the character and the script justice, but there was the general pressure of money behind this, and you are the focal point, so you have to bring it to some degree. My thing is truly just to over prepare. I like to be off book for four days in advance while we’re shooting so that while we’re there I don’t have to worry about that stuff at all. I imagine, like a lot of actors, especially people who come from a comedy background, I just like to get those one or two takes initially, that if I feel fine about it, what I intended to do, then I’ll get weird with it.

Filmmaker: There are so many meta things about this film: a movie about a movie and then you’re watching your own movie while your character is watching his. I think the whole trajectory of the film, for me, maybe not your intention, is the power of art to heal. After making this film, did you go through any catharsis or feel different about yourself or your career? James definitely does.

Mooney: To be totally honest, until it comes out and people get the opportunity to see it, I don’t think I’ll be able to have that kind of moment until I see what happens next. One of the fascinating things about this process, that I maybe never imagined, is how many steps there are in the making of an independent movie. There’s all these little milestones.

Filmmaker: Okay lastly, at my work, we share comedy videos back and forth— and often yours. Before I left, I polled them: which of Kyle Mooney’s videos/characters do you want to be a feature? They brought up the Walter the Ghost Expert in “Take a Knee.” That could totally be a movie, following him ghost hunting.

Mooney: Yes! Stephanie Allynne and Andy DeYoung made that video and I feel like you’re the first person, ever, that has brought up that video as a reference. It’s kind’ve an under-the-radar one. Were there runner ups?

Filmmaker: “Sporty,” we all loved.

Mooney: But Sporty would be tough. I guess the movie would be about him finally finding out what sports are, or something like that?

Filmmaker: And trying out each sport.

Mooney: That’s not a bad pitch.