Kafka, Renoir and the 99 Percent: Ten Thoughts about Twin Peaks: The Return 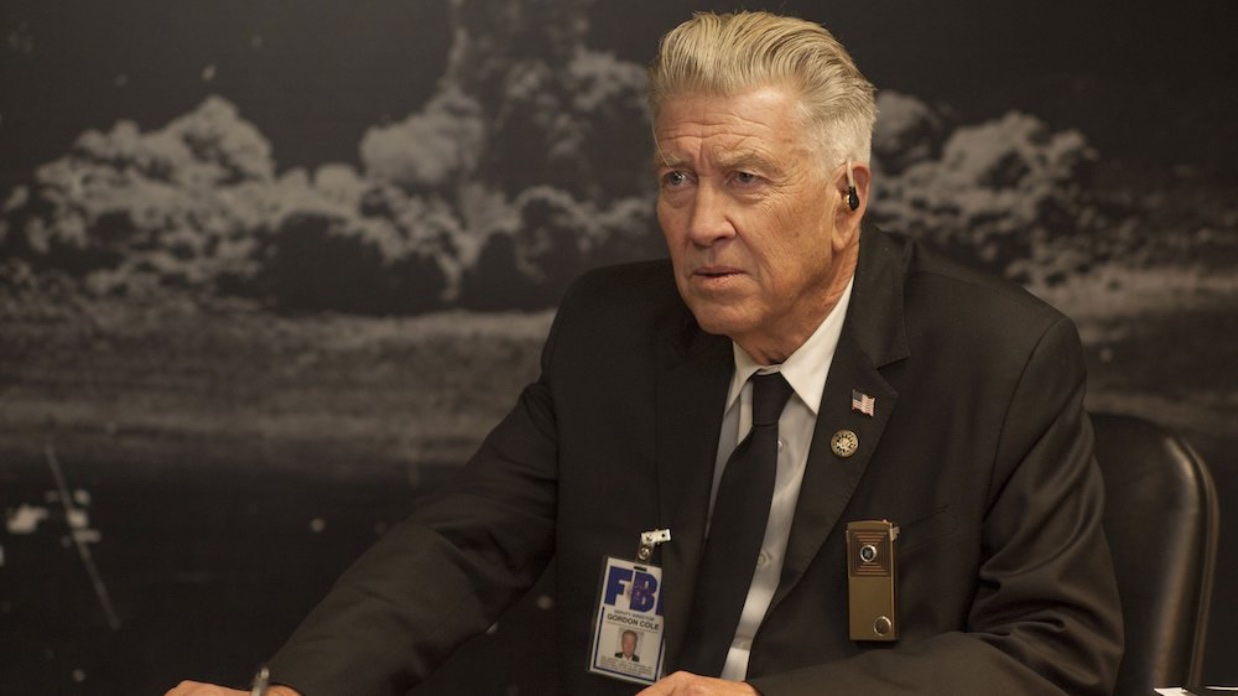 “…there would remain the terrified feeling of the return.” — Maurice Blanchot, The Step Not Beyond.

1. Whatever else you say about Twin Peaks: The Return, it seems that to talk about it, if you are in good faith, you must begin by talking about the difficulty of talking about it.

2. Twin Peaks: The Return issues some fairly unique challenges to summary or description. It is difficult to describe what is happening in the story, if there truly is a story, if one of its many threads has some kind of priority over the rest. The original series had, fairly clearly, a whodunnit structure. In Twin Peaks: The Return, Laura Palmer has been vividly presented as a Presence hovering over the series, and yet she is only intermittently and briefly part of the story. Even if, as one suspects, everything in the show’s climactic action turns out to be “about” her, she has been conceived almost exclusively as a symbolic figure or force beyond the definitions and constraints of literal reality — some kind of virtual spiritual substance. In only the first two episodes of the sequel we know one thing for certain — we’re all over the place.

3. Twin Peaks: The Return exhibits a very particular way of managing its status as a sequel. As a subdivision of this issue, it responds to developments in serialized drama on TV that have occurred on cable television, partly due to the influence of Twin Peaks, Seasons 1 and 2. It also exhibits a very particular non-literal approach to autobiography, in the sense that it is a certain kind of “testament” work, which constantly, and for different reasons, refers to David Lynch’s other previous work and, perhaps, in some cases, work he announced plans to create but never managed to. Finally, it also constantly refers to other cinematic, and, in some cases, literary work that has inspired and influenced him — work that permitted him, as it were, to go in various creative directions.

4. In the culture of 20th century modernism, into which Lynch was born and bred, one of art’s founding tenets adumbrated by art critic Clement Greenberg was “medium-specificity.” Medium-specificity refers with semi-scientistic overtones to the principle that a work of art should explore, define and expand the conditions of its own particular medium, that it should do the things that are unique to its medium and not veer off, impurely, eclectically and derivatively, into the forms and practices of other media. Theoretical rhetoric about cinema as montage from the Soviet era, or “cinema as a purely visual medium” in remarks by filmmakers ranging from Hitchcock to Kubrick, or Bresson’s principled disavowal of trained actors, or Brakhage’s refusal to use sound in his films, are all references to this aesthetic topic of medium-specificity as regards to cinema. (It need not be mentioned that some of these purists and other serious “experimental” artists have actually innovated by doing the exact opposite of what they polemically insisted upon — that is, they’ve advanced cinematic language precisely by utilizing theories and practices of artists in the neighboring media of music, art and even theater. Fassbinder and Rivette have, for example, shown that one can move forward in the cinematic by an apparent backward detour through the theater.)

5. So one angle for considering Twin Peaks the Return related to the question of its status as a sequel is to consider it as an intervention intending to consider the nature of television as a medium. This immediately raises the question of the relative postures of Twin Peaks, Seasons 1 and 2 and Twin Peaks: The Return in regard to this issue: The first Twin Peaks iteration was in one obvious sense a far more disconcertingly original, revolutionary alternative to series television’s state-of-affairs as it existed then in the early ’90s than Twin Peaks: The Return is now. And in another sense, the first Twin Peaks — in the superb two-hour pilot that Lynch wrote and directed — perhaps was Lynch’s last partly successful attempt to reconcile his modernist artistic ambitions with the project of mainstream commercial success. And whatever else, for better or for worse, Twin Peaks The Return is, it does not offer any hope of such reconciliation.

6. A lot of people are saying that the most fun thing and most successful aspect of Twin Peaks: The Return is Lynch’s performance as FBI Assistant Director Gordon Cole. I would compare this performance, a bit, to the greatest instance I can think of of a filmmaker playing an important but secondary role in his own work. I’m referring to Jean Renoir as Octave in Rules of the Game. Octave grasps what is happening better than most of the characters in that film, but he is powerless to avert tragedy. Some knowledge and sensitivity of the kind Gordon’s character exhibits is, Lynch shows us, better than nothing, but it is not to be confused with the power to master or compel the situation. In Episode 4, he says emphatically, “I hate to admit this, but I don’t understand this situation at all.” This is the template for the state of attention and consciousness that Lynch believes we ought to adopt in watching Twin Peaks. Clearing one’s mind. The readiness is all.

7. FBI Assistant Director Cole’s Washington office was seen for the first time in Episodes 3 and 4. On one wall, behind Gordon’s desk, is a huge portrait of Franz Kafka. On the opposite wall, behind those seated speaking to him, there is a picture of the nuclear mushroom cloud that will play such a significant role in the controversial Episode 8. A Reddit posting asked:

Did anyone else notice the framed portrait of Franz Kafka in Gordon Cole’s office?” Here’s what Lynch himself had to say about him in an interview with Chris Rodley: “The one artist that I feel could be my brother is Franz Kafka.”

Well. I noticed. I noticed that Lynch went as far as he could go in identifying the enigmas his characters are confronted with in the story as a symbol of the enigmas that the audience is confronted with while watching the show. He is playing with his cards face up as aggressively as possible. He is insisting on the shared responsibility of the artist and the audience.

Here are two fairly famous remarks from Kafka’s journal that might have furnished decisive inspiration for Twin Peaks: The Return.

From a certain point onward, there is no longer any turning back. That is the point that must be reached.

I have a constant longing to catch a glimpse of things as they may have been before they show themselves to me.

8. As fun as some things in Episodes 1 and 2 were, it was in Episode 3 when Agent Cooper falls into a long protracted silent scene of contact and instruction with a blind Asian lady without a mouth that the series started to take off for me. Lynch, in a pretty familiar trope from myths, fairy tales and mystical tradition, strongly believes in a blind person’s special vision, a heightened kind of sight or cognition using something other than physical eyes — something that issues from some unanalyzable combination of faith, utter passivity and self-annihilation.

9. In Episode 5, we’re briefly introduced to another one of many miserably unhappy couples that we encounter throughout the series who actually inhabit the town of Twin Peaks. Played by Amanda Seyfried and Caleb Landry Jones, they are Becky and Steve. (Becky is the offspring of Dana Ashbrook’s Bobby and Mädchen Amick’s Shelley). They lurch from quarrel to reconciliation to quarrel to reconciliation until Lynch suddenly fixes his camera just above Seyfried’s radiant upturned face as she speeds along in a convertible, the air and the light illuminating her delirious accepting smile. The shot goes on for a ridiculously long time, its beauty deliberately exceeding any narrative plausibility or function. These are the splendors that make Twin Peaks: The Return worth watching.

10. Episode 5 has an astonishing radio rant directly from Twin Peaks delivered by holdover Dr. Jacoby (Russ Tamblyn), a failed shrink who now calls himself Dr. Amp and is a deliverer of jeremiads against the corruption of America that have a decided anti-corporate, pro-ecological emphasis:

Cancer! Leukemia! Autoimmune disorder! Pulmonary embolism! Warts! Psoriasis and eczema! Cardiac arrest! Where are the cops when we need them? Anorexia. Body image bullshit! Microbial toxins —bacterial toxins! Environmental toxins! Our air, our water, our Earth! The very soil itself! Our food! Our bodies, poisoned! Poisoned!

He admonishes us to “dig through the shit into the truth.” It’s an extraordinarily straight piece of argumentation delivered in the most outlandish voice, and it reminds me of something I tell my screenwriting students: If you’re going to be obscure, you would do well to intermittently compensate your audience by also being blunt. This is the political truth as David Lynch, who recently became a Bernie Sanders supporter, believes in these days. Does the sheer glibness and snake-oil salesman affect of Tamblyn undermine the “truth” of what he’s saying? As always with Lynch, kind of but not that much. If we have doubts about Lynch’s political perspective, Amp’s rant, is echoed in Episode 6 by Janey-E. Jones’s (Naomi Watts) ringing declaration to two blackmailers: “We’re 99 percenters,” she says, referring to herself and her family. She goes on to loudly insist that America is destroying ordinary people by operating a rigged system where the powerful have endless license to exploit those who struggle. “We’re living in a very dark time,” are her warning words, and she seems vitalized by making this declaration, which puts a different spin on the same claims and accusations Dr. Amp made in the previous episode. Twin Peaks: The Return is always transposing a theme from one key to another, both within episodes and between episodes.