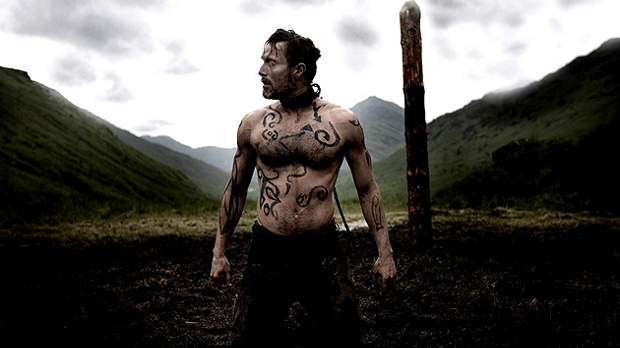 by Lauren Wissot
in Director Interviews
on Jul 14, 2010

Valhalla Rising, which stars Mads Mikkelsen (best known for playing the much more suave devil Le Chiffre in Casino Royale) as a one-eyed, mute, enslaved gladiator who joins a group of Viking Christians on a conquest that turns into an existential journey to hell, is certainly not what one would expect from Danish director Nicolas Winding Refn. And that’s part of the beauty of the film. Before this latest atmospheric mood piece containing echoes of Kubrick’s 2001: A Space Odyssey, Refn helmed the hyperkinetic Bronson, about England’s most dangerous criminal turned cult hero who never seemed at a loss for words or fists. Prior to that Refn made his name crafting stories from the drug-dealing underworld in his Pusher trilogy (which, incidentally, was Mikkelsen’s launching pad into film). Refn it seems is less like his fellow Dane Lars Von Trier and more like American Steven Soderbergh, both directors in constant motion, striving less to create important art than to simply surprise themselves. And by doing so, they often achieve both. 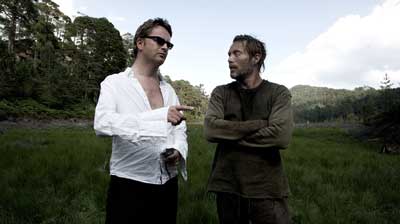 Filmmaker: Watching Valhalla Rising I kept thinking of certain American movies, but maybe that’s just because as an American most of my touchstones are American. The film felt like 2001: A Space Odyssey with the sound design from The Shining. Also, Malick’s The New World once the characters reach “The Holy Land” chapter. But once again, this might just be because I’m a huge fan of Kubrick and Malick. Who or what were your influences going into production?

Nicolas Winding Refn: Yeah, there’s 2001, a lot of that in Valhalla. There’s also El Topo, the Jodorowsky movie. The film was very much a mixture of the films I grew up watching.

Filmmaker: Was The Shining in there at all? I kept hearing Kubrick.

Refn: Ah, I think probably in the use of non-music — but not so consciously. The music itself was very much inspired by experimental sound like Einstürzende Neubauten.

Filmmaker: Really? I’m a big fan of Nick Cave. (Interviewer’s note: Einstürzende Neubauten’s lead vocalist and guitarist Blixa Bargeld is also a member of Nick Cave and The Bad Seeds, the band which sprang from The Birthday Party.)

Filmmaker: Yeah, I love The Birthday Party and The Bad Seeds. Interesting I didn’t make the Einstürzende Neubauten connection.

Refn: That’s because the way I usually work I’ll listen to a lot of stuff that kind of gives me ideas. I usually do contemporary movies. But with a movie that takes place in the 1100s, I couldn’t get into that kind of historical music. I had no interest in that. So it was quite a struggle. It wasn’t until Einstürzende Neubauten gave me the idea for a kind of abstract metal distortion sound — that and the silence. The silence of where we shot. It’s such a remote area of Scotland. There was nothing, no sound except nature.

Filmmaker: It also has a kind of Heart of Darkness aspect to it.

Filmmaker: Which is what also made me think of Malick’s The New World.

Refn: I haven’t seen The New World — but there’s a lot of Conrad’s book. The traveling into the unknown, the existential kind of journey that the Vikings realize they’re on.

Filmmaker: I think that was also the biggest surprise for me. I mean, there’s always the marketing hype you have to cut through, but when I hear “Viking film” I certainly don’t think of something as existential as Valhalla. It’s really more about the images than anything else.

Filmmaker: Yeah. And that was the other interesting thing. The first scene runs for quite a long time before you even hear the first words spoken.

Refn: There’s about 120 words to the whole movie. I think the first 15 to 20 minutes there’s no dialogue and then there’s seven lines — and then no dialogue. (laughs) And then there’s some dialogue during the travel on the boat — which was my spaceship concept — where they’re caught in a fog and it’s like they’re sitting in a space capsule. I remember when I was very little on television in Copenhagen seeing in black-and-white some footage of somebody in a spaceship flying. That kind of cozy, cocoon feel of the spaceship at that time, which is not as it is now. It’s almost a submarine journey into the unknown. That made such a very big impression on me.

Filmmaker: Which is much different than your other films — this emphasis on atmosphere over dialogue.

Refn: They rely on the yapping, yapping. (laughs)

Filmmaker: Well, the one thing I noticed the most is you’ve gone from the Pusher trilogy, which is very narrative driven, to Bronson, which is practically an avant-garde film with a lot of dialogue.

Filmmaker: Yeah, and this is so atmospheric that it almost feels like a parsing down to an essence. Maybe that’s what took me by surprise. Maybe I was expecting something much more narrative driven.

Refn: Also I think because Bronson and Valhalla were done back to back — with Bronson it was like, bang, bang, bang, bang. With Valhalla I wanted to go the exact opposite. It’s always interesting to make something an experience from the viewer’s point of view. Something different from what you expect. We’re so used to being sold the same thing and knowing what we’ll be consuming —that feel of surprise is what I find so pleasurable. And of course in order to get that you have to give the audience not so much what they want or don’t want, but what they didn’t expect.

Filmmaker: To expand on that in terms of Danish filmmaking, last summer my favorite film was Madsen’s Flame and Citron, and I’m a huge fan of Von Trier as well — and yet all these filmmaking styles are so very different. I’m starting to wonder if Denmark isn’t becoming the European capital for diverse indie filmmaking. Do you see that as well? Do you know all these directors?

Refn: Well, I know Lars. I don’t really know any of the other ones. I didn’t go to film school and that’s usually what bonds all these people together. I’m very much opposed to any movement, or being a part of any movement, so I kind of keep my individualism. (laughs) I’m like the Republican among Democrats.

Filmmaker: It’s interesting because you’ve got Lars Von Trier who’s made his mark with the whole Dogme thing — but then Dogme’s been around since the mid-nineties.

Filmmaker: And what’s so exciting is now it feels like the diversity is coming from a sort of backlash against this Dogme overshadowing.

Refn: Yeah, yeah. Well, I think what’s been very good for Denmark in the last 20 years is that they’ve decided they want to support the film industry a lot. So a lot of money is invested in the film industry. I mean, the Danish film industry — the building is like the size of that building on the corner. There’s a lot of awareness, which leads to investments. It makes a lot of difference when you’re trying to finance your first movie. Even now alternative film schools are a lot more respected within the community. There’s the national film school but there’s also a lot of alternative ones. I haven’t gone to any of them but I know there’s great talent coming out of the schooling in Copenhagen. There’s a lot of government support.

Filmmaker: You mostly rely on co-financing for your own films, though.

Refn: Yeah, well, the reason why I do my films in English is because the kinds of films I make are much easier to get distribution on a larger scale. I guess growing up in America it’s kind of a natural evolution for me. But, yeah, there’s the Scandinavian co-production, which is one part, and then there’s the local that finances just Danish films. Then there’s, of course, the European financed films — and that’s where me and Lars work, more in that arena.

Filmmaker: Speaking of shooting your films, with regards specifically to Valhalla Rising, what stocks were you using? What were you shooting on?

Refn: We used the Red camera. And that’s for two reasons. One is because we were in such a remote area and we didn’t have a lot of time to shoot so digitally it gave us a quicker turnaround. Then also the bond company was a little bit concerned about exposed film stock being in the middle of nowhere for the whole day. (Interviewer laughs) Also I was interested — I liked the look of it. I felt that look helped the movie.

Filmmaker: The color, though, was it a post processing —

Refn: It was all post-grade. And I’m colorblind. So as always everything had to be crushed to extremes. Diversity — I just love diversity.

Filmmaker: The other question I had – the big one I guess which we haven’t gotten to — you’ve been working with Mads Mikkelsen for a long time, since the Pusher trilogy.

Refn: I discovered him.

Filmmaker: Yeah, that’s what I was gonna say. It’s interesting because I watched Pusher a few weeks back and then, of course, I saw Valhalla Rising and I thought, wow, that’s not even the same actor! He’s just shot up by leaps and bounds. Which makes me wonder how your working relationship has changed over the years.

Refn: Well, it really hasn’t changed the way we work. I mean, we don’t socialize. If we don’t work we don’t see each other. We have no other connection to each other. So it’s more like I call him up and say, “Hey, let’s make another movie.” And he says, “Sure, what is it?” And then we argue a lot about the movie, its context, cuts, how to make it better. I shoot in chronological order, we make the movie, and then at the end of the shoot we say goodbye. We don’t hang out.

Filmmaker: wonder if that makes the work stronger in any way, for both of you. I just can’t get over how far Mikkelsen has come since that first film.

Refn: Also, I think with his aging — the looks of his aging –

Filmmaker: Yes. He’s grown into himself.

Refn: Really much more. I guess we all have.

Filmmaker: What are you working on now?

Filmmaker: But you’re going to work with Mikkelsen again?

Refn: Of course, eventually, but it’s more like we need to figure out what our next challenge is going to be. Like having to be mute and a non-person. Now it’s, how do we take it to the next level?