The Color of the Future: Roger Deakins on Blade Runner 2049 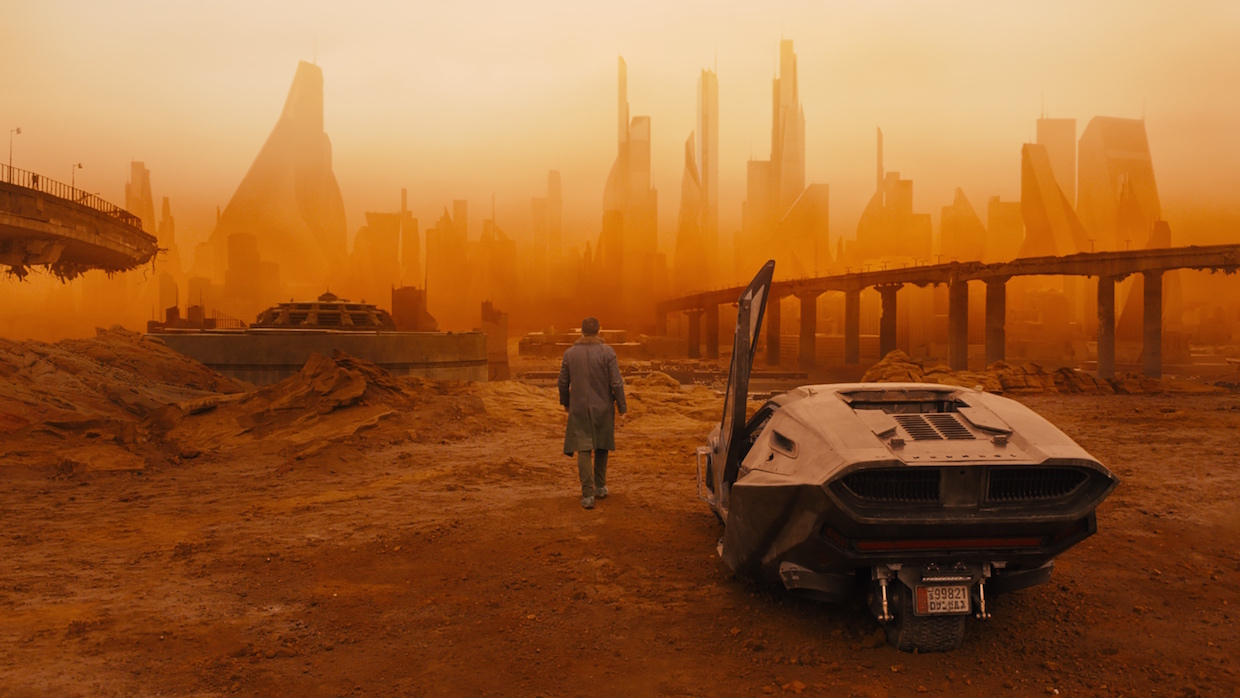 by Matt Mulcahey
in Cinematographers, Features, Interviews, Issues
on Sep 14, 2017

So, is there anything remaining on Deakins’s cinematic bucket list?

“What I really like doing is small personal dramas,” said Deakins with a laugh. “I don’t really like action films. I like films about people. I would’ve loved to have done Ken Loach’s films or movies for Alan Clarke or Peter Watkins. That’s the world that I come from.”

The British-born Deakins may someday get back to those roots, but his latest is anything but a stripped-down kitchen sink drama. Set 30 years after Harrison Ford first hunted replicants in a neon noir dystopia, the belated sequel Blade Runner 2049 finds a Los Angeles cop (Ryan Gosling) on the trail of Ford’s long-missing Rick Deckard.

The film, which reunites Deakins with Prisoners and Sicario director Villeneuve, opens wide on October 6. While finishing up postproduction on the highly anticipated sequel, Deakins told Filmmaker horror stories from the fledgling days of digital intermediates and why he prefers Soylent Green to Star Wars.

Filmmaker: Where are you right now in terms of finishing up work on Blade Runner 2049?

Deakins: We finished the digital intermediate (DI) last week, but we still have a couple of other versions to do. We’re doing an IMAX version, a 3-D version and an HDR version. It’s a bit of a pain, actually.

Filmmaker: Is this the first feature of yours that has required an HDR theatrical version?

Deakins: I think so. I’ve done (HDR versions for Blu-ray releases). The last time I did one, I felt like I had to suppress a lot of the contrast because sometimes the highlights were so bright you couldn’t actually see things. For example, there was a scene with somebody standing against a window, and you couldn’t see the person’s face because the highlights outside were so bright. So, a lot of it is suppressing highlights and actually putting less information in shadows when you don’t really want (to see) in there.

Filmmaker: The DI on Sicario was extremely short — something like seven or eight days. I’m guessing Blade Runner was a bit more involved.

Deakins: We’ve been working on it for quite a while. It’s been going on the last couple of months, but it’s not all been doing the DI. A lot of it has been helping to work on finessing some of the effects shots.

Filmmaker: What types of tweaks are you making? You’re famously an advocate of getting as close as you can to your desired look on set.

Deakins: I haven’t changed anything drastically from the dailies. You just tweak things a bit so that everything matches. Most of it has concerned matching the effects work.

Filmmaker: O Brother, Where Art Thou? (2000) is considered the first feature to have an entirely digital DI. How much has the process changed since then?

Deakins: Well, O Brother was very different because the Coens and I were looking to create a particular look (in post). That’s a very different thing from what we did on Blade Runner or Sicario where we’re not actually trying to stretch the image like we were trying to do on O Brother.

For O Brother, we went the digital route simply because that was the only way we could create the look that we wanted, which was this feeling of a faded postcard. We were shooting in Mississippi in the height of summer, and we didn’t want anything to be green. We needed a process that could suppress the greens and turn them into browns and yellows, and we just couldn’t find a way to do that photochemically so we turned to the digital process. It took us 10 or 12 weeks of work before we finished the final prints.

Filmmaker: It sounds like even in those early days of the DI you could do secondary corrections like isolating specific colors. Could you do things like power windows?

Deakins: I don’t remember doing any power windows. You could do a number of different selects, and what we were mainly doing was selecting the greens and pushing them into browns and reds and yellows. The main difference in the process was that on O Brother you couldn’t actually save anything. You had to work from the negative on a machine called a Virtual DataCine. So, the negative was on the machine and you were timing off the negative through the computer software. You couldn’t lay anything down on a digital file and save your work and then adjust it afterwards.

There was a week where we were timing one reel of film the entire week and then at the end of the week there was a computer crash and we lost all that work. The whole week’s work was just gone. It wasn’t like it is now, where basically the system is saving itself all the time as you’re working so you rarely lose any information. Back then, all it took was one systems crash and you could lose a whole week’s work.

Filmmaker: You’ve always been a cinematographer who finds tools that work and then sticks with them. You’ve been using the same Power Pod remote head to operate for 25 years and you’ve used ARRI Zeiss Master Primes and some version of the ARRI Alexa for all of your digital features. Have you tested the Alexa 65 yet?

Deakins: I’ve shot tests on the 65, but Denis and I were really quite happy with the feel of Sicario, so we decided to go with (the Alexa XT again). The 65 is great, but it’s almost too sharp and it’s so much data. We actually had a few Alexa Minis as well. We used them quite a bit.

Filmmaker: What occasions called for breaking out the Minis?

Deakins: Mainly for rigging in small spaces, and we also had a drone for some things and we used the Mini for that.

Filmmaker: I think a full set of Master Primes has 16 different focal lengths. Do you limit yourself to a few particular ones?

Deakins: Denis and I generally favor middle range (focal lengths), usually between a 27mm and a 50mm. On Blade Runner, we used wide lenses quite a lot. We went as wide as 14mm. A lot of the time, we were trying to exaggerate the space we had. Our sets were quite big, but we were trying to make them look even bigger.

Filmmaker: How much did you ultimately shoot on stage? Were you in Hungary for most of the shoot?

Deakins: We were in Budapest for all of it. We shot at Origo Studios, which is just outside Budapest.

We had all the stages that were available and that was our base. We also used this other studio that was 45 minutes away, Korda Studios. We used a lot of stage space. That said, we did also do location work. We shot some night work in the city. We shot in an old Russian power station. We shot in a school in the city. We shot in the basement of an old factory. So we shot in a number of different places, but it was mainly on stage. Then we also had a backlot at Origo that we used for two major exteriors.

Filmmaker: From the behind-the-scenes footage I’ve seen, it looks like production placed an emphasis on building as much of the sets as possible and then enhancing them with digital extensions, rather than just having the actors work in a sea of greenscreen.

Deakins: I think it benefits you to do as much as possible in camera. That’s why we built most of the foreground and midground and for the most part the CG is background extensions and things like that. There are a few flying sequences that are entirely CG, but even for those we had some aerial work done in Mexico City, Las Vegas, the California desert, Spain and Iceland. We had a great aerial cameraman who worked with us on Sicario, and he traveled to all those places and shot plates for the aerial work. So even those flying scenes are based on something real, and I think that makes quite a difference.

Filmmaker: We were talking earlier about your preference for sticking with certain tools for extended periods of time. Does that apply to lighting units as well, or are you gravitating toward these new LED technologies?

Sometimes you just make the choice based on what’s available and what’s more economical. For instance, it was better for us to use conventional space lights as opposed to LED space lights because we needed so many of them and ARRI in Munich, which supplied all our gear, could get the (conventional versions) quite easily, but it would’ve been hard to get that number of LED space lights.

Filmmaker; So far, all I’ve seen of the film is the trailers, but I was particularly awed by the scenes set in this orange desert wasteland. How did you get that look?

Deakins: We did it in a few ways. The opening part of that sequence was shot on one set, and for that I had Tiffen make up some filters for me for the camera to get that yellow and red color. Then, I gelled some of the lights with green gel so that when they reacted with the filter it would end up looking yellow. We shot another part of that sequence on a second stage, and for that I gelled all the lights to get that color.

Another section of it was shot on location in Budapest, in what I think was actually the old stock exchange building. We lit that with HMIs (pushed through windows), but we gelled all the windows to get that color using a combination of amber and Moroccan pink. I did a lot of tests in preproduction to find the right gels. So, basically, everything was done (on set). It wasn’t created in post.

Filmmaker: Did you test any of the LEDs like the SkyPanels that allow you to digitally dial in gels?

Deakins: It would’ve been too expensive to use SkyPanels for a set that size. One of the sets, which is this penthouse apartment you see in the trailer with Harrison and Ryan, had something like 150 2K blondes, probably 60 or 70 10Ks, and maybe a dozen T12s. I couldn’t have done it with LEDs. It would’ve been super expensive and difficult to get enough of them. And we were punching that light through heavy diffusion on windows with this very heavy gel. The gel pack I used took down like two stops. I don’t know an LED that would punch enough light through that combination of gel and diffusion.

Filmmaker: The original Blade Runner came out in 1982. I believe you would’ve still been in England at the time shooting mainly documentaries. Did that movie have an impact on you when you first saw it?

Deakins: I remember seeing it and thinking it was very stylish. I was a great science fiction fan. I still am. I particularly like Philip Dick so (the original film) wasn’t really what I was expecting. If you read Do Androids Dream of Electric Sheep?, it’s nothing like the film Blade Runner, really. (Laughs.)

The things I’ve always loved about science fiction are not really (present) in the science fiction you see normally. I think Philip Dick actually called it “futurism.” He didn’t like the term science fiction because he felt like he was writing about a possible future. He wasn’t writing fiction. He was writing supposition. That’s what I like. I like Soylent Green and Solaris, not Star Wars.