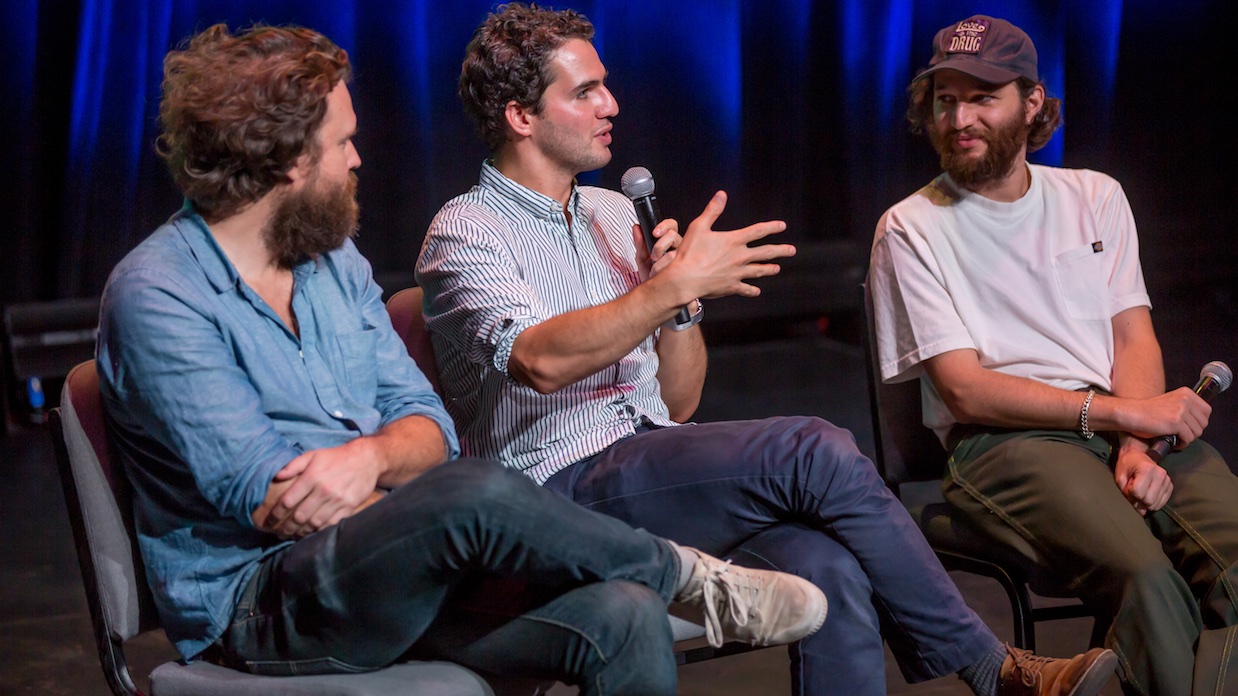 Directors Josh and Benny Safdie and cinematographer Sean Price Williams go way back. Their latest collaboration, the crime thriller Good Time, is the trio’s fourth joint effort. They’re not only used to each other; they’ve also been through some real shit. The Safdies love to work rough and tumble, filming most of their movies — including Daddy Longlegs and Heaven Knows What, both shot by Williams – on the streets and apartments of New York, feeding off and bottling up the city’s uniquely chaotic energy. For Good Time, they even dragged a big name, Robert Pattinson, along for the ride. To get one small scene, they all had to cram onto a subway train together.

“It’s so fun to take a 35mm camera on a tripod onto the 7 train at rush hour, with Rob Pattinson,” said Williams as he and the Safdies spoke at IFP Week, in a talk with Filmmaker contributing editor Brandon Harris. “Only one guy caught what we were doing.”

Williams and the Safdies had been there before, albeit with smaller digital cameras.

“I don’t think anything could beat Heaven Knows What, where we had two cameras with giant lenses, and we turned the J train into a studio,” Benny said. “Nobody questioned us.”

“One guy threatened to call the cops because the language was bad,” Williams said. According to them, though, the size of the camera doesn’t make shooting a scene in a public space easier or harder. “It doesn’t make a difference, whether you’re being slick with a little digital SLR camera or [if you have] a 35mm camera. That doesn’t change anything.”

If it doesn’t make a difference, why not go back to 35mm? That’s what the three did with Good Time, which trails Pattinson’s low-level hood Connie Nikas as he tries to save his mentally challenged brother (played by Benny), who’s been busted after a bank robbery gone awry. The texture of the images may not look all that different from the herky-jerk digital stylings of Heaven Knows What, but you can sense the weight of the heavier camera, as if to stress the burden on Connie’s back.

“Because it was a grindhouse genre pulpy movie, we felt like it had to be physical,” Josh explained. They agreed to do tests for their financiers, seeing what looked better: digital, 16mm or 35mm. When they tried out the digital, they shot a sort of character exercise scene with Pattinson and Benny’s characters in a car wash. “I looked over at Sean, and there were edges of a plastic bag sticking out of the lens. I was like, ‘Sean, what is that?’ He said, ‘I found some saran wrap and I shoved it between the lens and the gate.’” He was protecting it from the splash of water.

“We did everything we could to convince them that film was a safer bet,” Williams admitted.

Once they were shooting, the Safdies and Williams decided not to treat 35mm like 35mm — which is to say, it would look anything but crisp and handsome. They liked to under-light scenes, or gets takes when the light meter wasn’t saying there was much light.

“I was surprised by how indestructible it was,” Benny said about 35mm. “You could beat it up and it would still look good.”

“16mm you can’t beat up too much,” Josh added. “We were taking it to perverted levels, pushing it three stops sometimes. Daniel [April], our gaffer, was like, ‘You can’t do that!’ I was like, ‘No, it’s 35m it will hold up!’ Also, the camera itself, especially when the grand magazines were on it, was this massive thing. It was like having a really awesome sports car.”

“When I shoot 16mm now, I try to make it look like 35,” said Williams. “We were shooting 35 almost trying to make it look not good — or not ‘not good,’ but torturing it, exposure-wise, running around with it, being really punk about it. Maybe the next one, [the Safdies] want it to look more shiny and polished, but it’s really fun to shoot it this way.”

Good Time was the biggest production the Safdies had ever made, with the camera department seven times bigger, according to Josh, than the crew of Heaven Knows What. And then there was the guy from Twilight. Suddenly they found themselves in the same position as Olivier Assayas when he works with Kristen Stewart, making an art film while trying to avoid the Twi-hards.

“We have a movie star celebrity who’s so recognizable that it kind of destroys him,” Josh explained. “Part of the reason [Pattinson works] is embedded in his character is having to be on the run. We wanted to shoot the movie without paparazzi and things like that. That adds into coming up with the DNA of your film crew — interviewing everybody who’s going to be part of your movie. If you have one bad egg, that seed grows really quickly.”

“We didn’t want one person who wasn’t doing something,” added Benny. “Everyone had to feel embedded, part of the process. We started off really small — probably too small — then we realized we needed more people. So we kept adding crew.”

“I think the only cellphone picture that leaked from the movie was by Eric Roberts’ wife,” Josh noted. “We told her not to share pictures, but she took a picture on set of Rob from across the room, and she leaked it to the internet. That was it.” (Roberts, incidentally, is not in the final cut of Good Time. He shot one scene, which was cut, though not because his wife leaked a Pattinson photo.)

Good Time was different from past Safdies films in another crucial way. Historically they’ve been known to “steal” shots — filming without permits, sneaking into public spaces and hiding their cameras. Not for nothing did they call their debut feature The Pleasure of Being Robbed. That didn’t happen much with Good Time.

“We had the most permission that we’ve ever had on anything. Every location was locked,” Benny said. “Even if we had a place — for example, when we were shooting in the New World Mall [in Flushing] — we still approached it as if we were going to steal the shots.” They’d scatter their cameras everywhere, trying to hide from crowds that may not have known they were making a movie. “The cops were like, ‘You know you have this location, right?’”

They still wanted to have the freedom to shoot in their usual handheld, vaguely documentary-like style. The production design department had to ready the locations for a film shoot — often at night, meaning lots of bright lights — while still retaining the grime.

“Everything had to be 360 degrees,” Benny said. “That made it hard for Sean, because he really wanted to spin around all moments and have it be lit and dressed. But it also has to have this feeling of, ‘Oh, you just found this place. It’s just here.’ It had to have that kind of discovery aspect to it, even though all these places were locked-down and were being dressed for weeks ahead of time.”

New York natives, the Safdies have long been among the most devoted chroniclers of their hometown. For Good Time, they relished shooting a sequence at the Adventureland amusement park in East Farmingdale, which they had visited as kids. But while they got to show parts of the city rarely shown in the movies, they’d stop short of calling it a paean.

“I don’t think it’s a love letter,” Josh said. That said, it does show off the city’s immensity, and the varieties of life that dwell within. “Queens statistically is the most diverse place in the world, which is incredible. You can really move through it — especially if you’re on the run.”