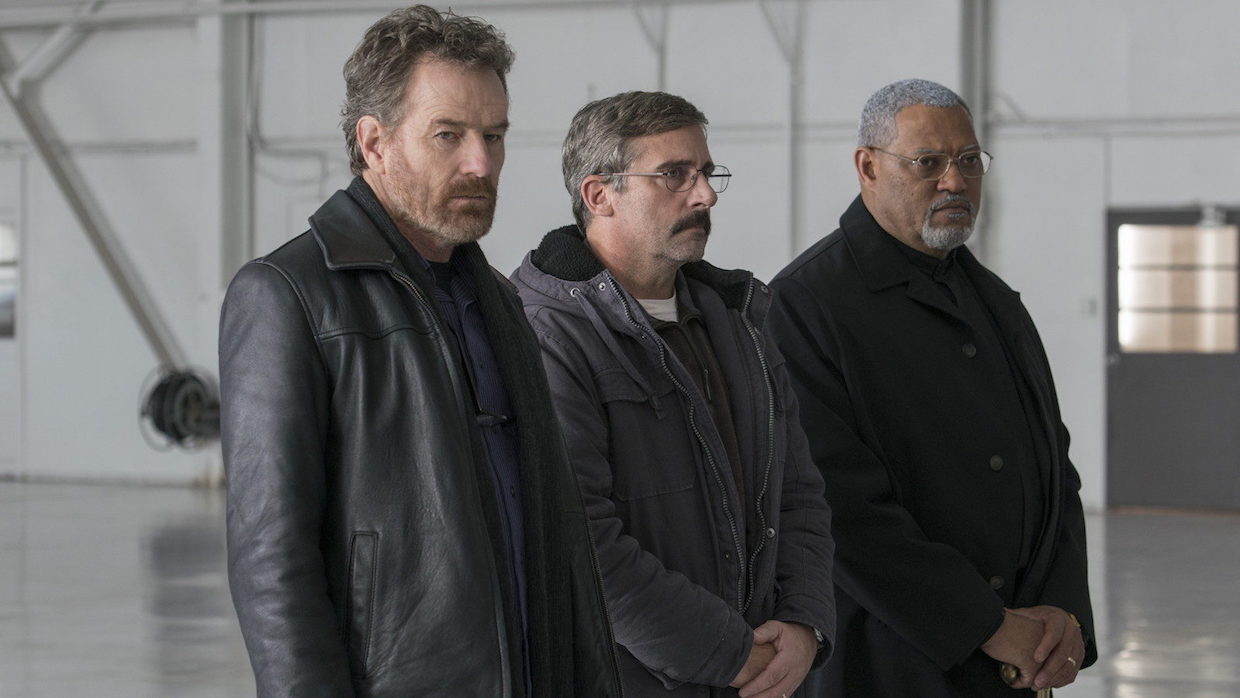 Until relatively recently, Richard Linklater’s hopscotching across genres and budgetary tiers had him generally pegged as an unpredictable magpie whose next move would never be clear; now, certain circles of online discourse have him basically pegged as the alpha male celebrator of white patriarchy (I did my song and dance on this a while ago, no reprise necessary). Setting aside those pejoratively-described constants, I think it’s true that starting with Before Midnight (the exact pivot point is arguable) the mandatory elements of A Film By Richard Linklater have become pretty fixed (put another way, I certainly don’t expect faithful filmings of mediocre plays to come back into the equation at this point). Not 15 lines into Last Flag Flying — an odd nominal sequel to The Last Detail — we hear bartender Sal Nealon (Bryan Cranston) announce that this isn’t reality, this is a dream. It’s a barroom rant in line with Linklater’s recurring focus on dreams and parallel universes that have often been ruminated over in dialogue, if never actually envisioned. Still, if we’re to accept that Jack Nicholson in 1973 grew up to look like what Bryan Cranston looks like now but in 2003 — ditto Steve Carrell subbing for Randy Quaid’s Doc and Laurence Fishburne stepping in for Otis Lord’s Mueller — that might very well be one definition of an alternate universe.

On a rainy night, Doc — the poor unfortunate sent to the brig in Hal Ashby’s film for stealing from a charity box, in a prime example of military chickenshit — ambles into Sal’s bar. Once, Sal was Jack Nicholson in 1973, which is to say a charismatic charmer, his most obnoxious traits — relentless braggadocio delivered through a perpetually chomped cigar and augmented by steady hard-drinking — redeemed by his sheer Nicholson-ness. Now Sal is a mess, the kind of guy who owns a barely populated bar to have a workplace where he can pass out in peace. He doesn’t recognize Doc, who’s come to ask a favor: his son has been killed in Iraq, and he wants Sal and Mueller to join him at the military funeral. They’re once again an odd trio of circumstance, reunited by a new disastrous conflict.

In Linklater movies, the straight line of time doesn’t require a parabolic rising and falling dramatic arc to be imposed upon it. The road trip to reach Doc’s son isn’t particularly wacky, and nobody learns anything: at one point, Mueller tells Sal he’s an alcoholic, Sal snorts “You think?!” and that’s that. A soldier, Washington (J. Quinton Johnson), is assigned to join the trio on their road trip to bury Doc’s kid; he has a mandate to make sure the soldier is buried in uniform, and it’s not remotely surprising that this potential point of conflict with Doc — thoroughly disillusioned after catching the Marines in a lie about how his son died — is resolved with zero drama. For about an hour — the middle, more or less — Last Flag Flying works, establishing a shared sense of jovial camaraderie and delivering a steady series of laughs. While watching it, I couldn’t help but think: “This movie is going to be slaughtered.” If Boyhood and Everybody Wants Some!! spawned thinkpieces accusing Linklater of normalizing rape culture, general misogyny etc., welcome to a movie in which former Marines use the word “whorehouse” while laughing unrepentantly. It’s no matter that this is pretty precisely the way that men of this age, background and shared experience would talk — this is a movie which spends a comparatively large amount of time letting them talk about their dicks, and conduct themselves in a way that doesn’t suggest they know (or would care) that the correct vocabulary is “sex worker.”

Linklater is (still) at the top of his technical game: there’s a long sequence that plays out in an airport hanger, in which space is divided so well while characters separate and re-converge that I forgot the sequence was locked into one big location over the course of approx. 10 minutes. Linklater’s thoroughly worked through his influences to make them serve him without being distractingly quote-y: you’d never guess how many hours he’d spent studying Akerman and Benning, though the Bresson overhead object shots are recognizable (for hands and keys, substitute Sal’s empty pizza boxes). And this is the first time I’ve seen a film that historicizes a period from my life when I was already a sentient adult (well, 17) with such precision that it’s disorienting how much has changed. I do, of course, remember life before HDTVs and ubiquitous mobile technology, but it’s quite another thing to re-enter a world of non-16:9 cathode ray displays showing Saddam’s capture and arrest. There’s a scene where the trio go to buy Motorola fliphones which could almost be a commercial, complete with the details of shared minutes for a family plan, but it’s an ad for a product that doesn’t exist anymore. It’s severely disorienting, though to what end I’m not entirely sure, other than reminding us that the past becomes a foreign country sooner than you realize. Prepare to hear Eminem’s “Without Me” used (and discussed!) as a period marker, which seems retroactively inevitable; I just always figured it’d be some teen movie that got there first.

I’ll concede: A normal Linklater hang-out movie is mapped on top of a sober Iraq drama, and the mixture doesn’t mesh. Unlike his usual MO of leaving intent and message indeterminate and malleable, Last Flag Flying‘s final scenes do seem to cohere to a fixable meaning: hate the war, support the troops. That just won’t do for me, certainly not as an appraisal of a catastrophe whose ramifications will presumably continue long after my death. This is an oddly po-faced note to end on, and the constant needle-drops of what sound like instrumental The Band b-sides don’t really help ground the film in anything more than a kind of generic Americana. Linklater has often proven that perhaps any kind of theme or setting can be reshaped in his mold; this time, it doesn’t take.