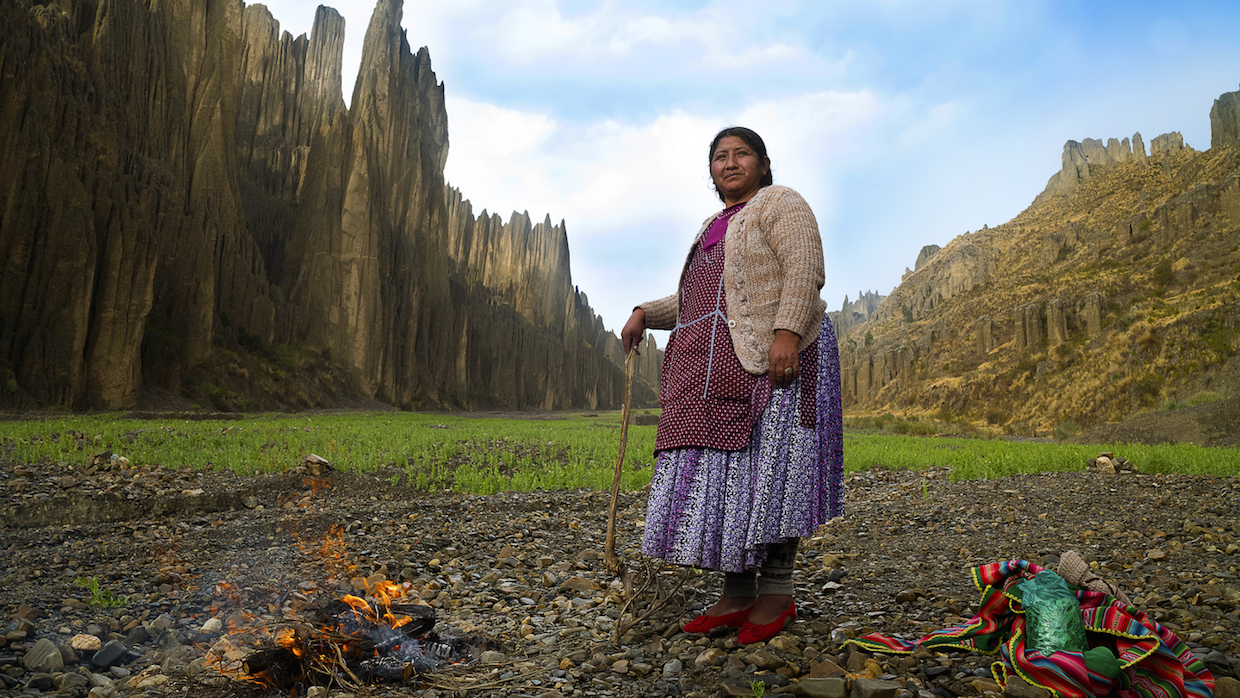 by Randy Astle
in Directors, Filmmaking, Interviews
on Dec 4, 2017

Last month Discovery Communications, Google, and Here Be Dragons released one of the most ambitious virtual reality documentary series yet produced, Discovery TRVLR. Writer-director Addison O’Dea and his team created 38 episodes on all seven continents, going to as remote locations as possible and focusing on the universality of the people who live there. Available on DiscoveryVR.com, the Discovery VR app, and YouTube, the series marks the next step, after works like Felix & Paul Studios’ Nomads series, to push VR into the field of ethnographic nonfiction. But as O’Dea emphasizes in our conversation below, TRVLR is first and foremost a travel show, not an anthropological document, and his team worked to make it as engaging and sticky as traditional television, whether to be watched serially or binged, while still exploring places and cultures that have been underrepresented to Western eyes. The result is a mosaic portrait of humanity portrayed through VR with more immediacy than has ever been available through two-dimensional films and series.

Filmmaker: The breadth of Discovery TRVLR is really enormous. What was the impetus behind making it such a far-reaching project?

O’Dea: The primary goal was to create the most visceral and impactful show possible. Travel programming is a well-worn genre, so TRVLR needs to feel fresh, timely, and relevant.

Traveling the world is an epic endeavor, and the people we meet are as important as the place we meet them, so we wanted to explore that side of the travel equation. Regarding the size of the show; how could the world’s myriad cultures be represented — and the subtle nuances noticed — in 38 episodes?

TRVLR is the start of creating episodic programming in virtual reality that has a format, a distinct narrative arc, opening credits — the hallmarks of television that are, and should be, transferrable. This series is a major stake in the ground, and exhibits the power of VR as both an entertainment source and a primary method of content consumption. Having great creative, story, casting and the best technology makes this possible, but so do big orders from proven networks and studios. Having the weight of Discovery, Google, and Here Be Dragons behind such an ambitious project like TRVLR is very meaningful.

With this sizable breadth, the challenge for a virtual reality series is one of organization, since the audience journey is not linear. I created archetypes we agreed we wanted to showcase, with the rationale that each could be found within almost, if not every, human settlement across every society. Simply put, we looked for entertainers, who have an audience; explorers, who have a mission; gurus, who carry culture; and renegades, who defy convention. At first glance, it is easy to visualize the Western ideals of who those people might be, but on a hyperlocal level, it becomes an elegant juxtaposition: “defying convention” in Communist Vietnam is significantly different when contrasted alongside the same idea in Catholic Mexico. Through this lens — which we showcase in TRVLR — the world becomes infinitely more dynamic. And, this gives audiences two obvious paths: the geographic journey, or the character journey.

Filmmaker: Can you talk about the production process? What logistical or technical hurdles did you have to surmount to pull it all off?

O’Dea: TRVLR was commissioned in April 2017, and we were in the field filming in July 2017. Research, writing, and general development/pre-pro was conducted in April and May, with casting beginning in earnest in May. A core tenet of TRVLR is access, getting into closed communities that are otherwise not open to visitors. Given how popular the travel genre is, you have to work harder as a producer and director to seek out these communities and earn their trust. That meant we were shooting in locations that required negotiations for safe passage through gangland and armed security. The upside to that is that we’re telling untold stories, but it only adds to the hurdles in the planning and the filming. Immediate credit goes to my two EP’s, Melissa Roldan and Mamta Trivedi. Without them, we would not have gotten out, nor returned, respectively.

We were casting on an almost 24-hour cycle, given that our production was global in scope. There were casting calls interspersed throughout the days including after we began production, right until we actually arrived to film. As an example, I was sitting in an aluminum motorboat in the canals of Xochimilco, a borough in Mexico City, on a Skype call with someone in a township in South Africa.

As with any global production, TRVLR involved many moving parts. As soon as we were in the field, we had runners flying to meet us to pick up drives with the data and ferry it back to Los Angeles to get uploaded to Google’s Jump software for stitching and edit. We were filming up to 14-hour days in a multitude of time zones, which meant that those casting calls I mentioned earlier were me and the EP sneaking off for a Skype call with talent in the Andes while in the forests of Armenia, bordering Soviet Georgia — and then going back to the hotel for hours of calls with editorial in Los Angeles. We had picture lock on 12 episodes by the time we got back to LA. This is where you have to really lean on your edit team, and our colleagues Matt Gelb, Alex Gamble and the internal post team at Here Be Dragons worked through highly unusual circumstances to bring our vision to life.

We filmed the whole show on the new Google Yi Halo (which, at the time, had yet to be released). So amidst the incredible push by the whole team to get the production out the door, our camera team and I were on a steep learning curve with a camera so new, our first set of rigs were prototypes! We shot the show in stereo, which is beautiful, but it was a constant challenge to capture the true movements and dynamism of the stars within that “sweet spot” between three and eight feet, which maximizes the stereoscopic aspect.

It took a lot of trust and support from DiscoveryVR and Here Be Dragons to make this happen, and a leap of faith that the genius minds at Google would provide us with capture technology that combined high-quality capture with ease of use and portability — and they did.

Filmmaker: Why do this in virtual reality? How did VR make this different than it would have been as a traditional documentary or series?

O’Dea: VR is a (relatively) new medium but travel and adventure is a natural fit from a genre perspective. So how do we maximize that fit? In the narrative space, that really means it is a new type of photography. Therefore, the question all VR creators should ask themselves is if the physical environment is compelling enough to warrant the use of VR. That could mean the place, or the people or community that lives within it. Travel, anthropology, and adventure are natural fits for this medium. The sense of wonder that is so intrinsic to traveling is maximized by this medium. It’s about finding visceral environs and human moments that invite audiences to explore environments and have an enriching experience beyond what is afforded with traditional TV — opportunities that are distinct and valuable in a way that traditional “flat” programming is not.

Filmmaker: On that note, what do you envision for the future of nonfiction VR and especially ethnographic documentaries told through virtual reality?

O’Dea: Well, first and foremost, TRVLR is entertainment. I want the hair on the back of audiences’ necks to stand up. The goal is to energize these viewers and provoke them into talking about the series with the same enthusiasm that they do traditional linear TV. If we can provoke organic Internet chatter that drives “must-see” content, then we’ve succeeded in making VR more mainstream. In that way, this has to be the future of nonfiction VR — pushing the boundaries of traditional storytelling to spark conversation amongst audiences.

Regarding ethnographic documentaries, I will revert into the paradigm of experience vs. education. While it is true that the two are not mutually exclusive, field experience in the ethnographic arena is invaluable — and, until now, impossible to replicate. VR is as close as we will get to delivering an “in field” experience to audiences. We can offer a far more immersive window into cultures, subcultures and civilizations than ever before, and getting closer to the ideal nexus of entertainment, experience, and education.

Lastly, once there’s a critical mass of quality content and an established, and consistent, consumer base able to watch it, networks and programmers will be able to better monetize against it. This will inspire other broadcasters to take the plunge into new mediums with bigger investments that, in turn, pave the way for better (and bolder) content.

Filmmaker: What about for yourself? What are you planning on working on next?

O’Dea: I’m continually creating stories centered around access to extraordinary people in hard-to-reach places. Those stories will be told in VR, TV and any other medium. The world is rapidly becoming a less certain place, with narratives that our civilizations have not experienced in a generation. We need to have programming that speaks to this new world that we live in without sacrificing the entertainment value that keeps audiences wanting more.