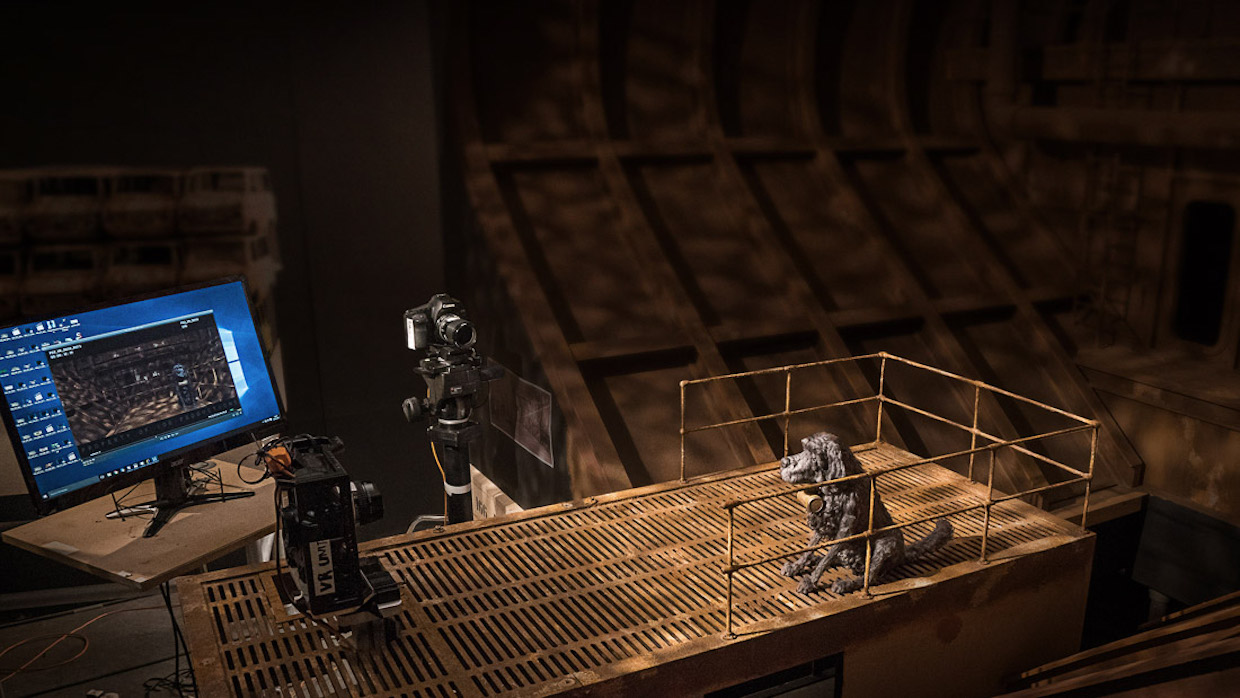 Isle of Dogs Behind the Scenes (in Virtual Reality)

by Filmmaker Staff
in Cinematographers, Interviews, Sundance
on Jan 18, 2018

UK-based cinematographer Tristan Oliver has worked on stop-motion features, shorts, music videos and commercials for more than 20 years. Oliver served as DP on Fantastic Mr. Fox, Chicken Run and Wes Anderson’s forthcoming Isle of Dogs. For that last feature, Anderson also tapped Oliver to shoot a VR short on the making of the film, which enters theaters on March 23. Oliver spoke with Filmmaker about the cameras used on the film, translating Anderson’s aesthetic to stop-motion and the film as “an homage to Japanese cinema.” The short will screen as part of Sundance’s New Frontier program.

Oliver: In terms of this VR project, I was kind of the automatic choice as I was also the DOP on the main feature from which this project derived, namely Wes Anderson’s Isle of Dogs. I have a huge body of experience in photographing stop frame animation and have shot many significant movies in this rather niche part of the filmmaking world.

Oliver: The film really had to follow the lead of the Isle of Dogs feature. Stylistically it is, of course, very much driven by Wes Anderson’s characteristic aesthetics and these have to be followed rigorously. Crudely these might include highly symmetrical framing, use of very wide lenses and deep focus and flat, overcast lighting. Also very detailed environments, heavily and idiosyncratically propped so one might say that you are creating a kind of story book illustration where every detail can be studied and restudied. You don’t so much cut from shot to shot but rather turn a page.

Oliver: Wes wanted to make a film that paid homage to Japanese cinema. The setting of Isle of Dogs is a fictionalized near future in Japan, so we watched a lot of movies from that tradition in an effort to take a distillation of some kind from that. This may not be so apparent in this VR environment!

Oliver: Actually, not many. The challenges of shooting animation remain fairly constant. Everything you see has to be made and made small so we have highly skilled set and prop builders working to make those things stand up to hard scrutiny. Also you’re moving a camera around in a very small space. A camera that is essentially the size of a small car in that environment. In terms of the VR we were actually able to use a single camera for the animation rather than an array because our characters don’t move on their own. So the camera could take the relevant slices of the spherical environment and then return to the key animation position. Obviously this has huge advantages in terms of lens and camera matching.

Oliver: We shot on the Canon 1DX which is a high-end full frame digital stills camera. These suit our purpose for stop frame features because we are really shooting a string of stills so we can shoot full frame RAW which gives us a huge amount of data to play with. We would also, on an average production, have about 80 cameras in our inventory so renting a regular digital movie camera becomes impossible with those numbers.

We decided on the 1DX after rigorous testing and in terms of consistency and compatibility with our software, the Canon performed the best. It also has excellent live view resolution. We combine the camera via an adaptor with Nikon stills lenses. There are a number of reasons for this: We need full manual control of the lens, aperture and focus, without the camera interfering so we need to isolate the lens from the electronics of the camera and we need manual focus and iris, as you would on any movie. There are plenty of Nikon lenses out there. They have full frame coverage and again our inventory is huge so looking at more expensive glass is not practicable. We use Leitax conversion mounts which are screwed to the lenses to minimize movement in the mount.

Oliver: That is an enormous question! Every project is different and depending on what the script demands and what the budget allows, the approach will vary a lot. As a general philosophy I would say that I never let the animation get in the way of the look. One shouldn’t be making concessions to the form. My job is to make things look beautiful and cinematic and just because I’m shooting animation, that shouldn’t change. On this job the lighting design for exteriors was very flat and overcast. Preferably to the point of their being shadowless. This isn’t necessarily where I would have taken it left to my own devices.

Oliver: There has been very little, if any, stop frame shot for VR (I think) so we were really learning as we went how to make that work. The shots are relatively simple as shots go. The camera is effectively static but the technical aspects of shooting the various slices to stitch together meant the building and programming of custom motion control rigs to enable us to capture that data. This took time.

Oliver: Because I was finishing Isle of Dogs at the same time as shooting the VR film, I wasn’t really part of the post production process and was unable to attend the DI. I assume there was a considerable amount of post production given the complexity of stitching the images together for VR.