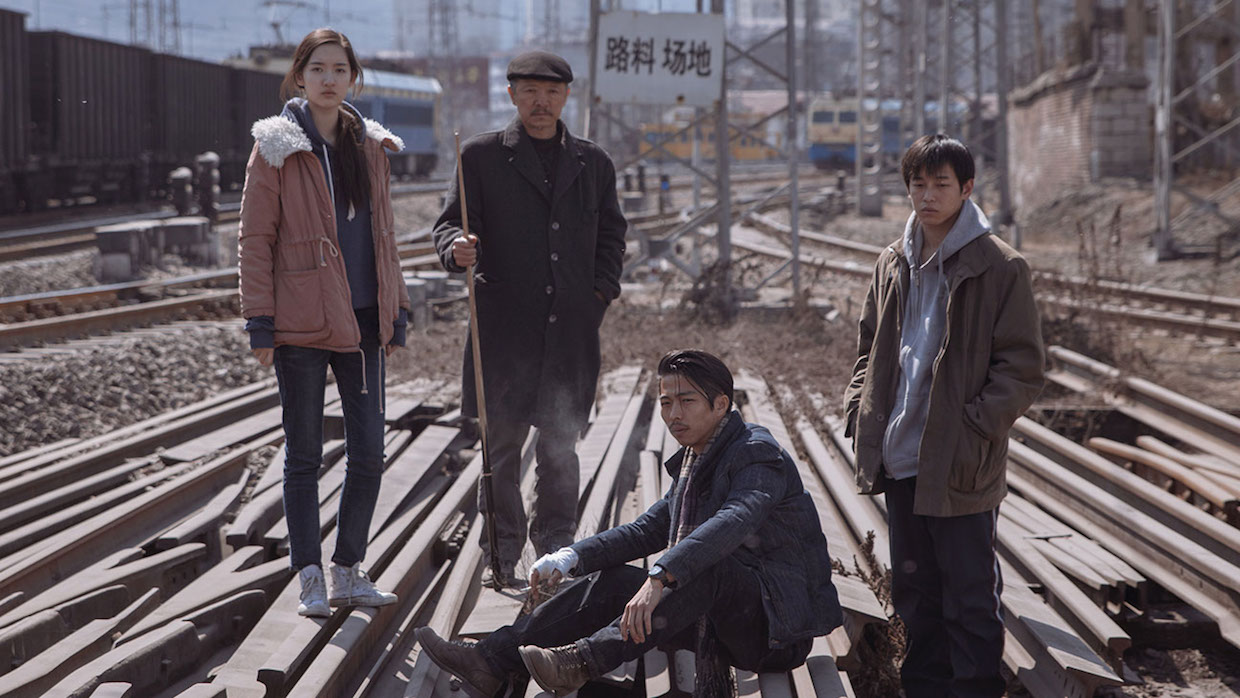 by Celluloid Liberation Front
in Festivals & Events
on Feb 27, 2018

“Through images of natural turmoil the viewer gets the idea that societal events are just as unavoidable as any flood disaster. Constantly receiving outbreaks of natural violence served up as news, the spectator automatically transfers natural laws of causality to human conditions and inevitably ends up mistaking the crisis of the capitalist system for a geological tremor.” — Siegfried Kracauer, “The Weekly Newsreel” in Die neue Rundschau 42, no. 2, October 1931

This year’s Berlinale was marked by two retroactively related occasions. The first one, celebrated by a retrospective, was the centenary of the Weimar Republic, that liminal space that historically divides the end of the German Empire in 1918 from the democratic election of one Adolf Hitler in 1933. The other occasion, hardly a cause for celebration, was the first time in the 68-year-history of the Berlinale that the festival took place while actual Nazis sit in the German parliament again. It would seem a good time, even if occasioned by a tragic occurrence, to revisit the political premonitions that Weimar cinema so perceptively picked up at the time and maybe even ask ourselves where are the Caligaris of today, if any. But no: as Andrew Horn noted in Variety, “we don’t see films reflecting the approaching rise of fascism” in the program. “Drawing that line is the classic ‘From Caligari to Hitler’ approach,” said Connie Betz who curated the retrospective, “which we didn’t want to do.”

It’s not for us to tell whether to deliberately ignore and downplay the presentiments of Weimar cinema is a good idea or not. This retrospective’s angle notwithstanding, the recalcitrant need for fascism — the ultimate defender of capitalist priorities in times of profound crisis — is hard to ignore these days and the Berlinale was no exception. Two titles directly addressed what is often reductively considered as the “ultimate evil” and yet, as people ranging from Primo Levi to Alain Resnais pointed out, is an ever-present possibility lurking behind the reassuring façade of liberal democracy (recent developments in Europe and beyond would appear to validate their conviction). One, Christian Petzold’s Transit, transposed Anna Segher’s WWII refugee novel to the present day. The other, Ruth Beckerman’s Waldheims Walzer, functioned as a sort of delayed broadcast of the scandal-ridden yet successful electoral campaign of Austria’s former president (from 1986 to 1992) Kurt Waldheim. In Petzold’s case the advancing horror of National Socialism constitutes the narrative pretext through which the German director explores the shifting psychology of those who flee. Beckerman’s documentary instead pays witness to the persistence of Nazism, its normalization and grotesque “excuses” in post-war Europe, long before the threat of “populism” became a buzzword in today’s media landscape. Both films, while steering clear from any political didacticism, do inevitably reflect on our current predicament and the general inability (or unwillingness?) to counter the resurgence of fascism.

That premised and said, the festival, a gigantic and perfectly oiled machine only Germans could be capable of running so smoothly, did not relegate its cogency to the unveiling of Europe’s unremitting cancer. It offered several surprises, the most overpowering of which was definitely Hu Bo’s impassive epic An Elephant Sitting Still, presented in Forum, Berlinale’s notoriously envelope-pushing sidebar. What Joy Division achieved chromatically through sound, Hu Bo did it with light in his first and last feature film (the director having taken his own life in October 2017). While it is hard not to place the director’s suicide in some sort of relation to the film’s deadly pallor and unrelenting gloom, it would be a mistake to celebrate the birth of a romantic cult figure rather than mourning the loss of a precocious talent. From the very opening scene up to its last frame, An Elephant Sitting Still doesn’t waste even a second of its precious 230 minutes; not a single image feels superfluous or ornamental, let alone self-indulgent.

Set over the course of one only, excruciating day, Hu’s film lures the protagonists to the Northern Chinese city of Manzhouli where, so they say, an elephant sits still ignoring the world. Mr. Wang is escaping the prison of seniority inside which his son wants to lock him up; Bu has pushed the school’s bully down a flight of stairs and is now on the run. The bully’s older brother, Cheng, is persecuted by the guilt he feels about a friend’s suicide, while Ling has left her mother and fallen for her teacher. Aside from a fateful plotline that will pull them together, what binds all the characters is an all-encompassing desperation out of which there seems to be no way out. Composed of pictorial profiles that leave the background almost always out of focus and dialogues that systematically avoid eye contact, Hu’s canvas is loaded with the bleak tonalities of grey, livid blue and putrefied green. The primary colors of daily life have been smothered by pollution, human relations reduced to self-interested expediency by the venom of progress; hope has been erased from the vocabulary of emotions. It is a film stricken by an existential agony that clutches itself onto the spectator’s flesh like a desperate hand hanging from a cliff. Though specific to a generation of Chinese youths, An Elephant Sitting Still feels one of the most cogent renditions of the compulsory solitude we all seem to have been sentenced to.

Speaking of happiness and rosy prospects, another film traveling the sunless meanders of the human condition was André Gil Mata’s Drvo. Here is finally a genuine, non-artefact film from that cinematic bubble of pure marketing that is Portugal, out of which have been coming the most pretentious, vapid and unbearably self-indulgent films of the last decade or so. The pompous emptiness that hides behind much of that country’s celebrated output is here filled by images of transcendental immanence. A man collecting bottles of water and then embarking on a mysterious boat trip is the spark that ignites a hypnotic journey transfiguring the landscape through which it travels. His journey comes to a halt (or a new beginning?) when he’s confronted by a young boy — maybe his younger self, maybe not. Every sequence comes to life not only through movement but also thanks to the saturation of colors that elevate the film’s figurative dimension from the planes of realism up into the mist of incantation. Every element, diegetic or not, never renounces a multiplicity of interpretative options, resulting into a viewing experience devoid of authorial arrogance. Drvo is a film whose narrative and visual solipsism are never inhospitable; on the contrary, it unfolds in front of the spectator with a rare, generous humility. Nebulous in its outlook, it nonetheless speaks with a crystalline diction that doesn’t need to spell things out. Actually it’s when dialogue enters the frame for the first, significant time that the film almost loses its impalpable eloquence.

The protagonist of Corneliu Porumboiu’s latest film, Infinite Football, is absurdly eloquent. Laurențiu Ginghină, a quixotic figure stranger than fiction and larger than life, is a Romanian pen-pusher whose career in football was cut short by a violent tackle back in 1986. When his tibia broke as well a year later, effectively cutting off his aspirations as a footballer, Mr. Ginghină started to radically reconsider the fundamentals of the game. Somewhere between the totaalvoetbal of Johan Cruyff (Holland’s greatest philosopher after Baruch Spinoza), a Ionesco play and the tactical subversion of Zdeněk Zeman, his theory of “Infinite Football” is both ludicrous and truly utopian. Based on the centrality of the ball and a consequent downscaling of the celebrity footballer, Ginghină’s wacky theory envisages a division into sub-teams, the rounding off of corners and other (im)practical suggestion. The end goal? A more harmonious game where fluidity and aesthetic justice prevail over competition and athletic confrontation.

His sports philosophy is ennobled by the ironic tact, deadpan framing and directorial elegance of Porumboiu, who can often be seen on camera listening intently to Ginghină. Through their delightfully surreal conversations we soak in the allegorical dimensions of football and the spherical parallel between the world and the ball, contradictory stages where humans’ dreams and failures are played out. Like all great football revolutionaries, from Maradona to the supporters of FC St. Pauli, Ginghină’s contribution isn’t confined to the realm of sport. Having already tried to solve an irrigation problem in Nevada, he is no stranger to challenges and his football theory doesn’t exclusively apply to the green pitch. Ginghină believes that the whole European continent could benefit from it, fractured as it is by a technocratic game of hard ball that has bitterly divided it into two leagues: the productive north and the unprofitable south. It is when measured against the sterile language of bookkeeping that his unhinged proposals start sounding, as he himself insists they are, not merely utopian but even practicable.

A most effective antidote to the cutesy Orientalism of Berlinale’s opening film, Wes Anderson’s Isle of Dogs, came with Yama – Attack to Attack by Mitsuo Sato, who was murdered in 1985 while filming this documentary about day laborers in Tokyo. Completed by a collective of filmmakers headed by Kyoichi Yamaoka (who would also be murdered by the Yakuza once the film was finished), it has been rarely screened ever since, especially in Japan. The reason for the fatal hostility towards the directors is soon revealed in the documentary, which chronicles the struggle of Japanese workers to unionize and the undiplomatic repression they face at the hands of the management via the mafia. In the ’80s, Yakuza gangs gained significant power as subcontractors in the booming construction business, effectively managing large sections of its labor market. Among other things, Yama offers one of the most authentic depictions of organized crime, which cinema has historically sugar-coated in spectacular stereotypes. In Japan, as elsewhere, the mob primarily serves as the armed wing of capital, executing those tasks “respectable” businessmen would rather not be caught performing. Yama also shatters the enduring cliché of Japanese harmony and the aesthetic conventions that come with it, unveiling instead a violently classist society by no means reconciled by its legendary, economic growth.

An attempt at reconciliation is made by Lola Arias in her feature debut Theatre of War,  which nonetheless grants each warring faction its own “truths” and consolations. The Argentinian director gathered together veterans of the Falklands/Malvinas war from both sides of the divide and re-staged their shared experience of war and, most painfully, the post-traumatic affliction that follows soldiers out of the battlefield. Less interested in finding a political solution than in trying to explore the unheroic legacy armed conflicts leave in their wakes, Arias manages to place irony and tragedy next to each other without being undue. The abyss that separates the nationalist rhetoric of war — especially one launched by an embattled prime minister in a (successful) bid for re-election — from the psychological fragility of those who fought it is the very space that the film inhabits. Part therapeutic theatre, part performative installation and part Brechtian psychoanalysis, Theatre of War is at the very least a promising opera prima – the kind of work that, along with its imperfections, justifies not only its own existence but also that of the festivals that provide it with a test audience and possible launchpad.