“Think of Me as a Glorified Member of the Art Department”: Tilda Swinton’s Qumra Masterclass 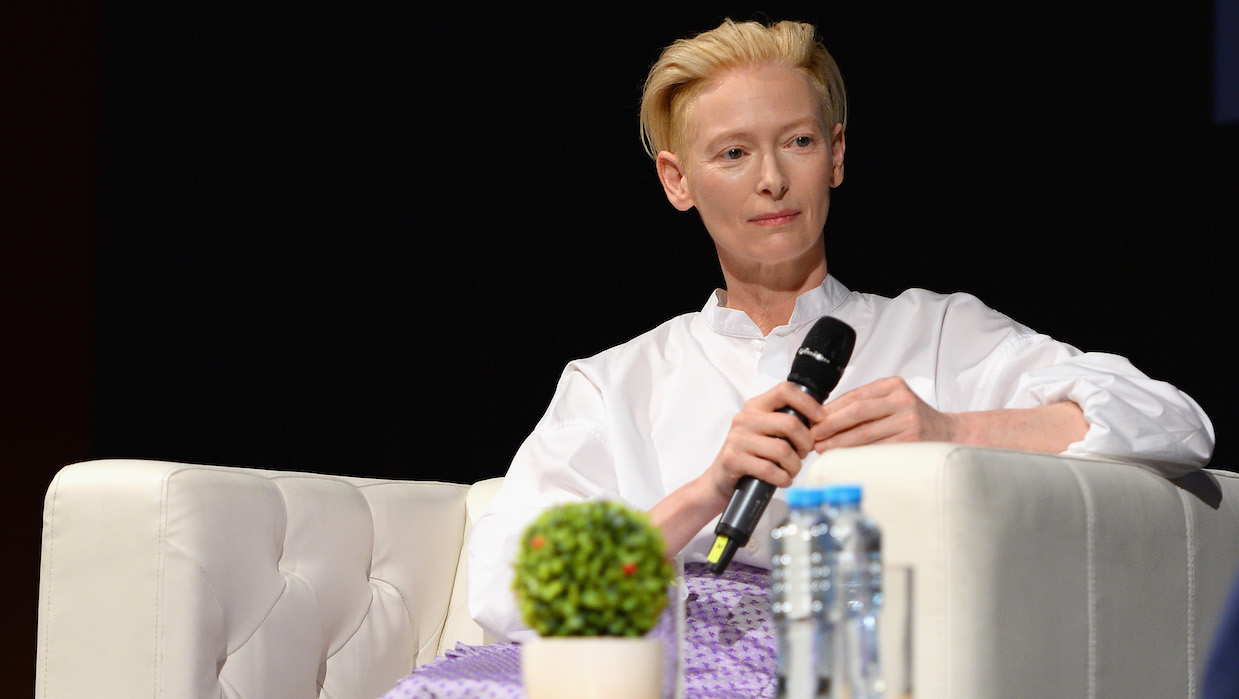 An initiative of the Doha Film Institute, Qumra is a focused event that connects Qatari and international directors receiving different stages of DFI-funded support with industry delegates from across the spectrum of the film world as well as a handful of heavy-hitting “Masters,” in a mentor-like capacity who meet with emerging talents and engage in public conversations.

Kicking off a series of impressive masterclasses at the fourth edition of Qumra, Tilda Swinton took the stage in a revealing two-hour conversation with TIFF’s Artistic Director, Cameron Bailey. Q&As with big talent are typically geared towards a relatively broad audience formed of a general public and/or those who are attending a coinciding event, oftentimes with a promotional impetus. At Qumra, these rather lengthy and in-depth talks are primarily for the aspiring filmmakers and serve no purpose other than to enlighten. Bailey’s first question quickly set a tone that insured there would be no fluffy or predictable exchanges, and Swinton was game. Upon being asked how she sees her own screen persona, Swinton playfully upset any expectations by revealing she “never intended to be on the screen and honestly never do. I don’t think of myself as an actor and don’t intend to be one.” Having studied as a writer at Cambridge — and still very much seeing herself as one to this day — Swinton was a film fan with refined taste who happened to be serendipitously swept into the world of cinema. So this supposed masterclass on acting became something altogether different, about a life intertwined with cinema and a career of collaboration in a larger sense of which performance is but one facet.

“Think of me as a glorified member of the art department”: Swinton went on to explain how her work in film is the consequence of a series of conversations with friends, beginning with Derek Jarman, with whom she made nine films before his death in 1994. In the 80s, the BFI’s infrastructure was such that filmmakers like Jarman, Sally Potter and Peter Greenaway could receive support to create work that wasn’t intended to be commercially successful (a glorious moment whose end she lamented). From those early collaborations, Swinton seemingly couldn’t help but end up in memorable roles in films by immensely talented pals. Sally Potter proposed they adapt Orlando together: “Every time I finish a film I say it’s my last, but then I join people in conversations and it hasn’t stopped.” Swinton describes herself as an author who will come on board of a project at its inception or not long after and play a considerable part in shaping her character and developing the ideas alongside the filmmaker. Sometimes these “conversations” go on rather long: “Suspiria is just about to come out this year, which I’ve been talking to Luca Guadagnino about for over 20 years.” Speaking of Guadagnino, she’s working on co-writing a new script with him (that she doesn’t necessarily plan on acting in).

Swinton’s aspirations to live an artist’s life began with mischievous origins. Born to a military family with little regard for creativity, she recounted a particular memory that ignited a spark: “When I was about 10, my father was having his portrait done by a painter and my mother talked about this painter coming in this disapproving way. I waited and looked down the hallway to see this exotic ‘artist.’ They didn’t trust artists, they thought they were irresponsible and childish — and potentially dangerous. It got me excited.”

Swindled into becoming a screen actor — at least part-time — Swinton was drawn to art and cinema as a lover of creative expression. A true cinephile, her investment in film comes from a respect for the director as auteur: “When I hear actors talk I know I’m not one. I’ve never heard anybody else in front of the camera talk about ‘the frame.’ There’s a difference between stepping into a Jim Jarmusch frame, a Wes Anderson frame or a Béla Tarr frame. We’re talking about different cinemas every time and I love them all. I don’t know that I could step into a frame that I didn’t love.” With different frames and cinemas also come wildly different characters, from a 3000-year-old vampire to an evil witch — but the most challenging for Swinton? Her Oscar-winning turn in Michael Clayton. “That’s a real stretch me, a corporate lawyer. That’s the most sort of classical script I’ve worked with and a more naturalistic performance. A lot of my roles are fantastical and people are more scrutinizing of whether you’re a convincing lawyer or not.”

Swinton was quick to mention the Coen brothers as the most demanding directors to work with, sharing an anecdote about receiving an email from Joel Coen insisting she memorize her lines properly — something she confesses she’s terrible at, preferring to know the core of it and improvising around the essence of the dialogue. In the playful spirit of the conversation, Bailey asked Swinton to respond quickly with a one or two-word answer to describe some of the directors she’s worked with.

With questions about what stories need to be told and by whom heating up amidst public movements towards equality, Swinton deflected the notion of looking at cinema in a gendered way, insisting instead that film is a transcendent language beyond an individual’s identity: “The wonderful thing about art and cinema in particular is it’s a free state for us, to be free of gender, nationhood, race, age. It’s absolute carte blanche so that we don’t have to carry our own sense of identity into the frame. I think that’s the best use of it. We are all film fans and at a certain point when we were very young sat in the dark and felt ourselves being taken into someone else’s shoes, which is the most humanistic thing that art can ask of us and can provide for us.”

Sharing a story about her son, Swinton struggled to hold back tears. Putting him to bed years ago when he was very young, he asked her, “What were people’s dreams like before cinema?” “It blew my mind.” Opening up her heart for an entranced audience, Swinton’s love for cinema and her loving spirit in general, was palpable and infectious. Less a masterclass in acting so much as it was about a life lived in devotion to film, it proved more instructive and inspiring than one may have predicted.