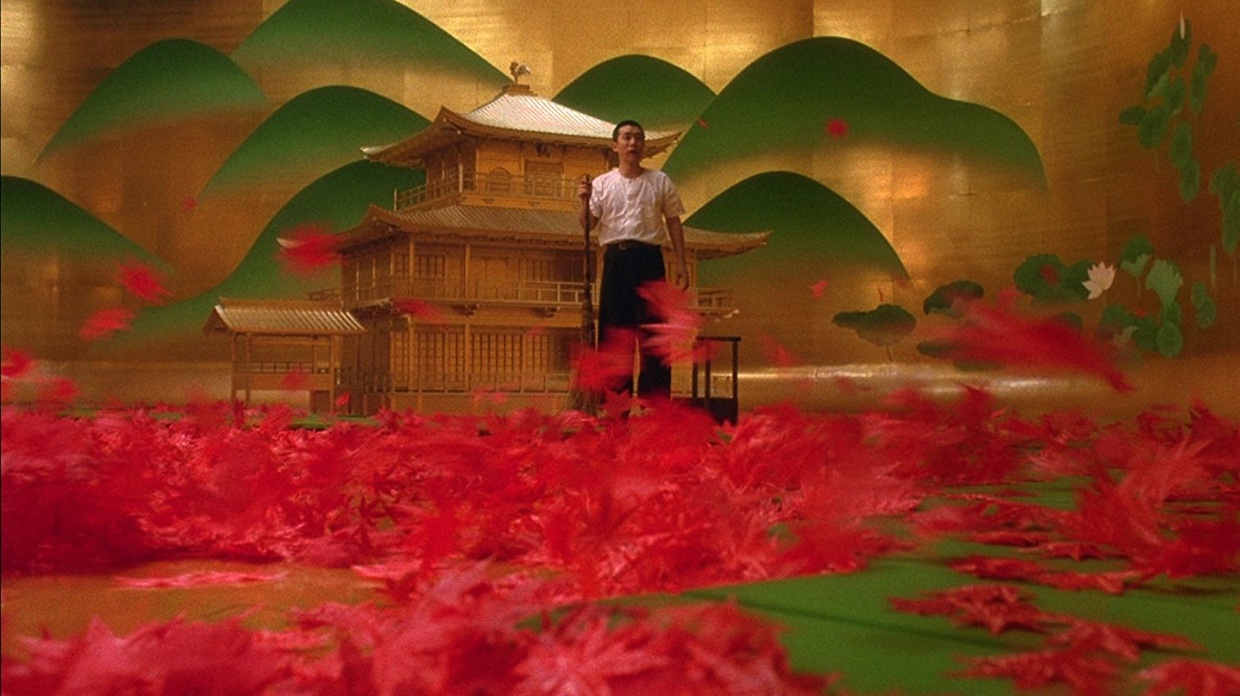 In a nice bit of cinematic serendipity, Paul Schrader’s singular 1985 film Mishima: A Life in Four Chapters arrives on Blu-ray from Criterion at the same moment that his latest movie, First Reformed, is enjoying a deservedly successful art house run. Mishima remains perhaps Schrader’s most original and idiosyncratic film, which is really saying something; a meditation on the life and writings of Japanese author Yukio Mishima, it’s neither a conventional bio-pic nor a straightforward literary adaptation, though it combines elements of both forms. Schrader, writing in collaboration with his brother Leonard (Kiss of the Spider Woman) and sister-in-law Chieko, tells the story of Mishima’s last day on earth, during which he committed public suicide following an odd and daring occupation of the Eastern Army Headquarters, but also constantly cuts away for black-and-white flashbacks and highly stylized adaptations of the author’s stories. Working with cinematographer John Bailey, set and costume designer Eiko Ishioka, and composer Philip Glass, Schrader weaves these disparate elements together into a hypnotic meditation on the impossibility of finding harmony between art, language, sex, thought, action, and politics — the only way Mishima is able to achieve even the illusion of such harmony is through death. The protagonist’s suicidal impulse forms a link with Schrader’s earlier script for Taxi Driver and, to a lesser extent, with First Reformed; it’s highly challenging stuff both formally and thematically, and the only reason the movie was made at all was thanks to a series of odd production circumstances that gave Schrader total creative freedom. Half of the money for Mishima came from Warner Brothers as a way of currying favor with producer George Lucas, who put his name on the film (as did Francis Coppola) to help Schrader out. The other half came from a Japanese company that became embarrassed by their association with the controversial film and thus disowned it days before shooting, yet still honored their obligation and gave Schrader the couple million bucks he needed. With the Japanese investors out of the picture and Warners not particularly concerned with the movie as long as George Lucas was happy, Schrader was free to do whatever he wanted, resulting in one of the weirdest, grandest, and most thought-provoking personal statements to come out of any major studio in the 1980s. The movie looks and sounds incredible on Criterion’s Blu-ray, which is loaded with great special features that take the viewer into Mishima’s colorful production history and aesthetic design; the new transfer is also currently streaming on FilmStruck’s Criterion Channel.

Mishima is one of three highly recommended releases from Criterion this week, the other two being Beyond the Hills (2012) and Graduation (2016), the two most recent features from Romanian director Cristian Mungiu. Like Schrader, Mungiu is a cinematic moralist of the highest order, a director whose work probes spiritual and ethical issues with rigor and intelligence. Beyond the Hills examines the limits and virtues of both religious faith and its absence, while Graduation uses the tale of a desperate father’s attempts to rig his daughter’s college exams as a way of exploring a multitude of questions relating to personal and political corruption. In both cases Mungiu brilliantly uses the most intimate means — stripped down plots and characterizations, sequence shots in which every scene is depicted unblinkingly, without edits — to burrow deeply into personal stories which lend themselves to broader metaphors. The films couldn’t be more specific and spare, yet their implications are national and even global; Graduation in particular is devastating in its portrait of corrosive moral decay in a family that stands in for not only the government and social structures of Romania but global fracturing and incoherence. The discs are up to Criterion’s usual standards, in terms of both the exquisite transfers and the insightful, informative extras — the interviews with Mungiu on both films are particularly enlightening.

In the streaming world, I recently caught up with “Volume 2” of Justin Simien’s hilarious, insightful, and essential Netflix series Dear White People, which has developed into not only one of the best TV shows in recent history but one of the great American satires of all time, in any medium. If that sounds like hyperbole, pick any random episode and marvel at the clarity and wit of the dialogue, which line by line demolishes clichés and conventional thinking with surgical precision; Simien and his collaborators have an awe-inspiring ability to cut through the mental and ideological clutter of our social media-saturated age to concisely penetrate the contradictions and biases inherent in the ways all of us view race, gender, and speech, and how all are related to power and class. What’s even more awe-inspiring is Simien’s ability to express these ideas via characters that are fully dimensional — they can be ridiculous and they’re always very, very funny, but they’re never jokes. Simien and his collaborators (special attention must be paid to editors Phillip J. Bartell and Omar Hassan-Reep and their flawless modulation of tone) have achieved something I would have thought impossible: they’ve managed to satirize the outrageous moment we’re all currently living in, an age that often seems so inherently absurd to begin with that it would be impossible to parody. Beyond the brilliance of the writing, Dear White People also boasts some of the finest visual storytelling in television; the direction is as purposeful and stylish as the writing, with every shot as carefully chosen, constructed, and dense as every line of dialogue. Kimberly Peirce’s episode, the fourth in season two, is a particular standout — her ability to compose images that simultaneously express character and theme and serve as ruthlessly effective delivery systems for the jokes is beyond impressive. I’ve always been a fan of Peirce — her 2013 remake of Carrie is one of the most shamefully underrated genre pictures of the last ten years — but she’s taken what she does to a new level recently with her television work. On shows like American Crime, I Love Dick and Six she has, without much fanfare, been pushing the boundaries of the medium and her own talent in thrilling ways; getting to see her at the top of her game is just one of many reasons to tune in to Dear White People.