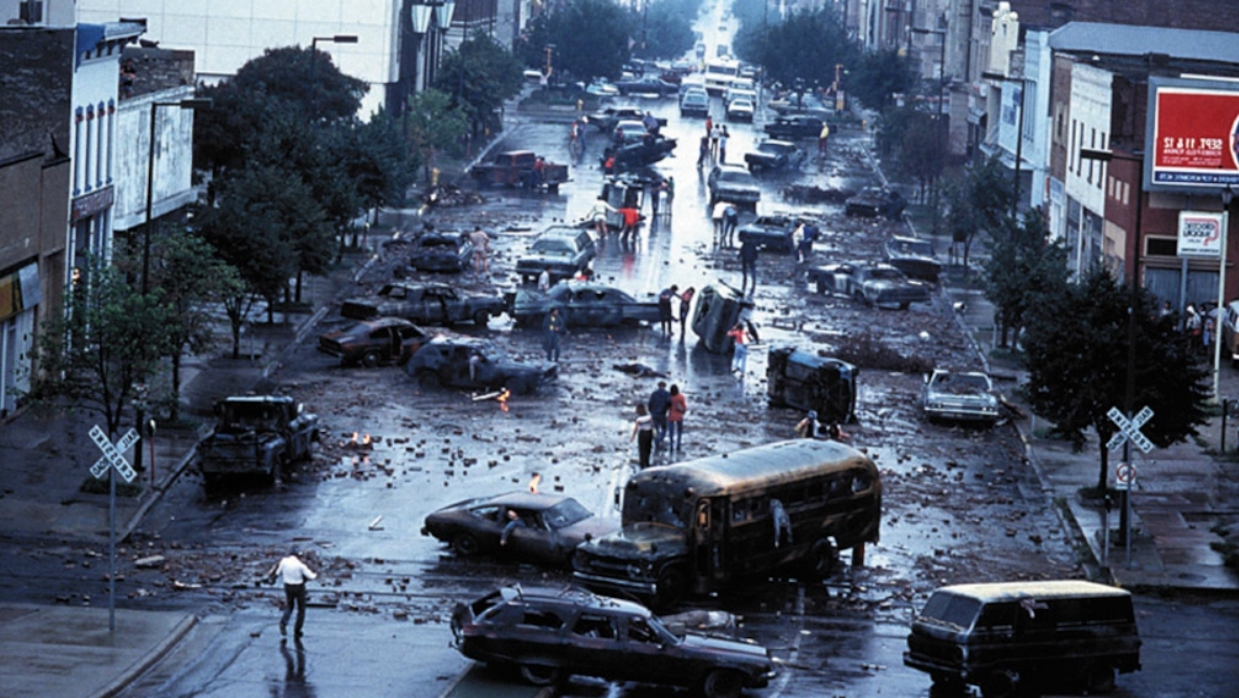 One of the bleakest, most affecting and most expertly directed movies ever made for television arrives on Blu-ray this week in the form of Kino Lorber’s special edition of Nicholas Meyer’s The Day After. When it first aired on ABC on November 20, 1983, Meyer’s harrowing vision of the impact of a nuclear war on a Kansas town was a phenomenon — over a hundred million people tuned in, making The Day After the highest rated TV-movie in history. It also happened to be one of the most powerful and sophisticated thanks to Meyer’s uncompromising approach to his material (an excellent script by veteran scribe Edward Hume) and deft juggling of spectacle and intimacy. The first third or so of the movie carefully lays out the Altmanesque ensemble, a group that includes Jason Robards, JoBeth Williams, John Lithgow, Steve Guttenberg and dozens of other actors, all of whom are pitch-perfect and kept in perfect balance by Meyer and Hume, who pace the movie flawlessly — it’s fast but never rushed, and the tension increases steadily but almost imperceptibly until the realization that the characters have less than 30 minutes before Soviet warheads hit their town. After that the intensity explodes with almost unbearable terror as the characters whose lives have been so beautifully realized on screen are either killed or forced to deal with the trauma of going on in the aftermath of a nuclear attack. The attack itself is terrifying; while some of the effects may be dated, they retain their power to shock, and the apocalyptic images Meyer — who was on one hell of a streak in this era, directing The Day After as his third film following Time After Time and Star Trek II: The Wrath of Khan — creates are more nerve-rattling than ever in our current unsettled age.

The scope of the picture would be astonishing in a big-budget theatrical release, let alone a TV-movie; I have no idea how Meyer did it with TV resources, but the scenes of mass panic and tragedy rank with those in the greatest epics in the history of cinema. Again though, what really makes the movie work is the juxtaposition of that scale with quiet, restrained moments of individual reflection, sadness, and exhaustion; ultimately The Day After is a movie of minor gestures and exchanges in which the cumulative impact of hundreds of tiny moments leaves the viewer devastated. That it ever made it to the screen intact is a miracle given the battles Meyer had to fight to keep the despair of his vision from being diluted, and his struggles are recounted in a terrific half-hour interview on the Blu-ray, which also features a conversation with Williams and an informative commentary track by film historian Lee Gambin and comic book writer Tristan Jones. The disc contains both the ABC cut and an international theatrical cut that runs about five minutes longer.

This is a good month for TV on Blu-ray and DVD in general, as most of the series that are about to return for the fall are seeing their previous seasons released on disc. One of the best new packages is the special edition of NCIS: New Orleans — The Fourth Season, which delivers an opportunity to encounter the work of some of the best action filmmakers currently working — among them several directors I’ve interviewed for this site, including Mary Lou Belli and Stacey K. Black. In its past few seasons NCIS: New Orleans has evolved into one of the most visually and aurally interesting shows on television, transcending its origins as a procedural spinoff thanks to playful and ambitious writing and reliably inventive uses of the city in which it’s set. The filmmakers don’t just plop their actors and plots down into the locations; they let the New Orleans ambience seep into the fabric of the overall design, so that even when the characters are on interior sets there’s a continuity of light and color that separates NCIS: New Orleans from its companion shows, as well as from all the other procedurals on television. The look is warmer and brighter than most crime series, with cinematographers Gordon Lonsdale and Paul Olinde employing saturated reds, purples, oranges and greens to give the images literal heat — their vivid photography conveys a palpable sense of humidity rivaled only by Do the Right Thing and Body Heat. This vibrancy extends to the show’s use of camera movement, which is energetic but not chaotic — there’s no handheld for handheld’s sake, but a feeling of constant motion driven by the characters and facilitated by the environments, most notably the primary headquarters set; as conceived by production designer Victoria Paul, it has so many entrances and exits and frames within frames that one rarely sees the same camera position repeated. And when the series does go on location and leave the dialogue behind for its action set pieces, the results are consistently striking. Belli’s “Powder Keg” episode channels Dog Day Afternoon to provide a clinic in contained action and sustained tension, while Black’s “The Last Mile” recalls 70s-era William Friedkin in its propulsive chase sequences and shoot-outs.

Perhaps the most impressive filmmaking of the season comes in the first half of the final episode, “Checkmate,” in which director James Hayman orchestrates multiple lines of action with the musicality and precision of 1930s-era Renoir; in one sequence he brings all the major characters together in an impeccably orchestrated marriage of blocking and Steadicam work that’s a master class in visual dynamism and clarity. Hayman’s episode and others benefit from layered sound design that often incorporates music in ways unusual for network television. Again, the New Orleans setting is influential here, as the filmmakers have clearly taken their cue from the diverse and constant music that plays throughout the city. There’s a lot of live performance on the show of the type you might expect – in bars and clubs, on the street, etc. — but what’s unusual is the way it’s implemented and recorded. All of the performances on NCIS: New Orleans are recorded live, not performed to playback, and it gives the music a buoyancy that’s difficult to find in the canned, antiseptic musical numbers on other shows. This is aided by a mix that weaves the performances in and out of the action in ways that one doesn’t always notice, but which add texture to the series; music is constantly playing on the series, but it’s not always front and center. The show uses music the way George Lucas did in American Graffiti, as part of a fluid aural tapestry presenting music the way we hear it in daily life — sometimes in the foreground, sometimes fading in and out, sometimes as something that will only resonate later in memory.

Music also informs and adds dimension to the show’s lead character, Dwayne Pride, who’s a musician himself and whose temperament — reserved and amiable on the surface but passionate, conflicted, and a bit melancholy underneath — finds its fullest expression at the keyboard. Pride is played by Scott Bakula, who combines easygoing warmth with a palpable inner tension so convincingly that one might think he was merely playing himself if he hadn’t been equally convincing in so many totally different roles. (If you want to get a taste of his breadth, just compare his work as Pride to his turns in Steven Soderbergh’s The Informant and Behind the Candelabra.) He’s confident enough not to push for his effects, which makes the scenes in which he reveals his depth and vulnerability — such as a phone call he makes to his dementia-afflicted mother — subtly powerful; they sneak up on you. That such delicacy can coexist with some of the liveliest action currently on any screen, big or small, is part of what makes the NCIS: New Orleans — The Fourth Season package such essential viewing.