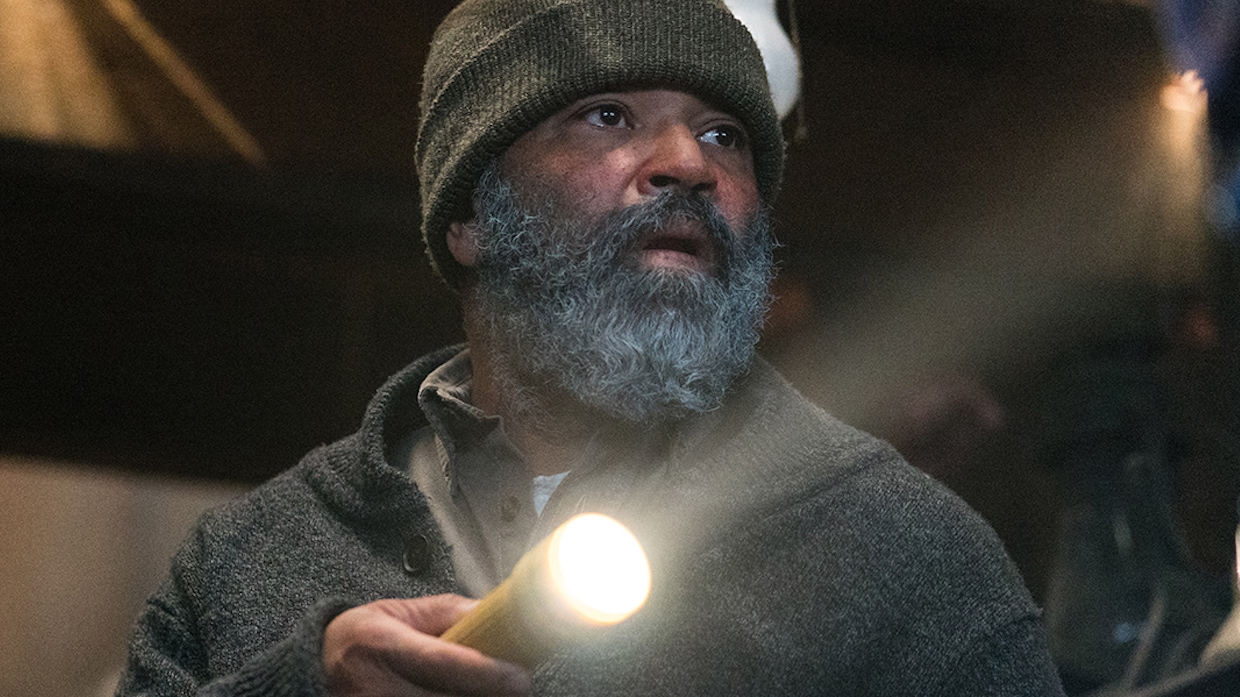 Jeffrey Wright in Hold the Dark

It gives me no pleasure to slag on Jeremy Saulnier’s Hold the Dark; his previous two films, Blue Ruin and Green Room, were good bleak fun, laconic in general, tersely amusing when dialogue emerged. But Hold the Dark has no interest in being fun; it’s much more interested in being taken Seriously, as a Serious Movie, and that’s a very bad trade. I have not read William Giraldi’s source novel, but I conferred with someone who has, who confirmed that many of this movie’s bad ideas — primarily, a heavy metaphorical and literal emphasis on the disastrous invasion of Afghanistan — are organic to the film.

Russell Core (Jeffrey Wright) arrives in remotest Alaska to help Medora Slone (Riley Keough), a grieving mother whose two children have both been abducted by wolves. A writer who’s lived among them, Core is there to try to help, not to kill the offending wolves, but about the time Medora starts sleepwalking naked in a wolf mask it appears something is wrong. Cut to combat in Iraq, where Medora’s husband Vernon (Alexander Skarsgård) is posted; it’s here that Saulnier re-introduces his signature fixation on Savini-esque blood squibs and gore. It’s a trade-off I’m willing to take when clever thriller dynamics are the goal; here, though, the focus is on Bringing The War Home (I believe Core actually says something like “it’s real, people are dying”). Set during the battle of Fallujah, Christmas week 2004, Hold the Dark is here to grimly reconfirm that that particular international adventure was a disaster; doing so requires some metaphors about wolves devouring their wolves, as well as a particularly grim mass shooter set piece that’s played like Die Hard, a decision that’s slightly unnerving. Why this movie is so hellbent on being taken Seriously I don’t know, but it’s a hard pose to maintain when you’ve also got a dude walking around in a wolf mask getting stabby. Nearly two hours long and smothered in portent, this is either just no fun or straight-up overwrought.

In Yuri Bykov’s last film, The Fool, a poor young man stupid enough to think idealism, or even just facts, matter in contemporary Russia, spends a whole movie warning that his apartment building has a crack in its foundation that will bring everything down. No one wants to hear it, and the film ends with him being beaten up by everybody his troubles; as a metaphor for the nation-state, it’s not subtle, but some situations are too dire to allow for anything but the bluntest of tools. I didn’t expect Bykov to take the same themes — corruption and male rage in an endlessly awful Russia — and apply them to a hostage thriller with lots of guns and shoot-outs, but he does in The Factory, which wastes very little time. Workers are told unceremoniously their plant will be closing at month’s end, with remaining pay to be delivered in “no more than” half a year. That’s no good, so a plan is quickly hatched to kidnap the boss, get him to call his people and get the cash dumped off. Things, predictably, do not go well. Bykov, again, is not interested in subtlety; there are big speeches that spell out the direness of the national situation. But he’s also interested in having fun with the tension, letting people say rude things that are also grimly amusing and delivering some thrills. It’s just as on-task as Hold the Dark but works much better, because its ideological agenda does not preclude the possibility of enjoyment. And with that, I need to stop writing for the week and go experience some enjoyment myself; there’ll be one last post next week to wrap things up. (In the meantime: TIFFers, take a chance on The Chambermaid.)