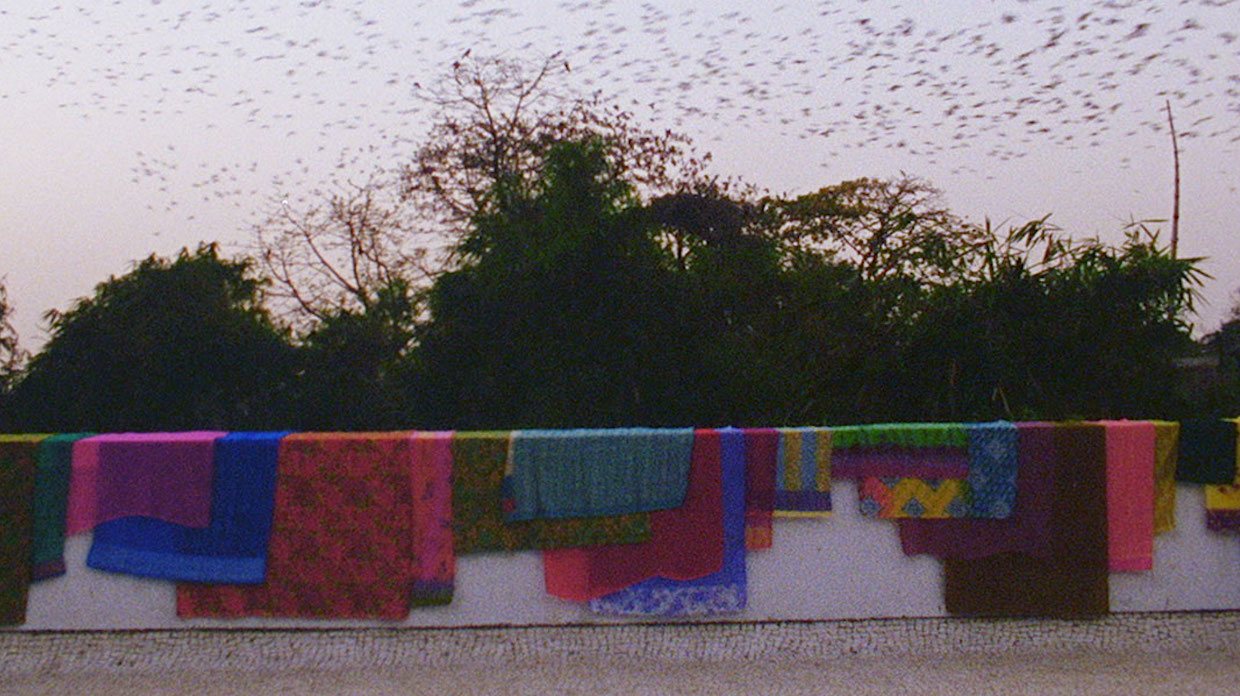 Like The Duke of Burgundy, Peter Strickland’s In Fabric isn’t a giallo but feints at the genre, wrapping itself in lovingly reproduced trappings to pursue an entirely different agenda. Burgundy was an unexpectedly emotional examination of the difficulties of mutually negotiating the obstacles of a long-term relationship; Fabric is unemotional, its primary instincts either mischievous or satirical. It’s a pretty good time—too long, which makes it just like pretty much every cult movie ever made, so that’s appropriate. The opening credits list legendary British soundstage Twickenham Studios as one of the production companies, and the credit’s no joke: the movie takes place almost entirely in blatantly constructed indoor spaces, glaringly artificial and on-the-cheap knock-offs of the real world (I thought of the few British films in this pocket from the ’70s I’ve seen, like The Abominable Dr. Phibes, whose charm accrues from their impossibly unrealistic lighting and a pleasing shabbiness).

The main set is a department store, its floor presided over by a flagrantly sinister salesperson (Fatma Mohamed) luring customers in with endlessly florid enticements. “A purchase on the horizon,” she purrs at bank teller Sheila (Marianne Jean-Baptiste), “a panoply of temptations.” (That’s one of her less convoluted sentences: my pen couldn’t keep up with the esoteric combinations of adjectives that get thrown out regularly.) A divorced single mother, Sheila wants a new dress for one of the correspondence-by-post blind dates she regularly/fruitlessly goes on, and a flattering red number seems like just the ticket. This being billed as a killer dress movie, what happens eventually is no surprise; then again, the store’s catalogue description (“Colour: artery”) should also be a giveaway.

Setting itself somewhere in the late ’70s or early ’80s, Strickland’s sensibility is close to the “hauntological” pocket, the Boards of Canada-adjacent musical genre with a heavy sampling emphasis on weirdly evocative old library music, the hiss of dated TV broadcasts and so on. Strickland’s reconstructed shabby old England is filled out with meticulously low-budget TV commercials for the department store, newspaper personals ads and lots of other ephemera that are the opposite of menacing giallo terrain. (What this album sounds like is what the movie felt like to me.) The opening credits are freeze-frames from the entire narrative to come that are in the genre pocket—scissors and fabric, gleaming red nails, gloves, people screaming—but they hint at an alternate version of this film that’s interested in actually conjuring menace and scares. Strickland is more concerned with very specific pockets of comedy, like the salesperson’s luxurious ad copy dialogue or Sheila’s two bosses, seemingly a male couple who shift from platitudes about how well she’s doing to delivering the “bad news” garnered from a recent “really meaningful meeting” with all the pained fraux-embarassment of prime Michael Palin. On a macro level, Strickland deploys a diptych structure—having claimed one victim, the dress moves on to its next target, as the film’s every narrative beat in the first half is mirrored with significant distortions once again (hence part of the running time overage). Alt-tabbing between a department store that’s this close to turning into a bank actively issuing loans for the sole purpose of entrapping people into debt and an actual bank, Strickland climaxes with a vigorous sequence of destruction that’s unambiguously anti-capitalist while retaining a certain nostalgia for dated store architectures evocative of a slightly less homogenized big-box age. It also demonstrates that Strickland would have been the correct person to adapt High-Rise.

Fashion double-feature, sort of: Jodie Mack’s The Grand Bizarre is easily one of the fest’s highlights. The limited selection of Mack’s work I’ve animates posters, magazine ads, chip boards etc. in colorful movements. She can locate bright, pleasing shades seemingly just about anywhere, so it makes sense that The Great Bizarre is all about textiles, which apparently come up a lot in her work. Like a (mostly) lyric-less Dusty Stacks of Mom, Bizarre structures its distinct movements around original tunes of Mack’s own devising, which I would cheerfully pay for a copy of: she can locate the possibility for a mystique concrete starting point seemingly anywhere and knows exactly when to drop the bass. (The track I’m temporarily calling “Skype Call-In [Dubstep Remix]” is a particular highlight.)

I doubt I’ll see a more exhilarating sequence this year than Bizarre‘s pre-title card opener, a rapid-fire montage of textiles—arrayed on surfaces, rising like sea foam from suitcases, reflected in car mirrors—airplane tickets, maps et al., cut so quick that you’re more apt to see points of light and splashes of bold color than the details. In her intro, Mack noted that the film is in part about “getting lost,” a phrase which can sound like tourism advertising copy; after watching this, though, I take her point. The footage was shot over five years in something like 15 countries. In a typical stop-motion set-up, Mack will lay out six textile fabrics or so on a balcony surface, change them all a few frames later and repeat ad infinitum while the sun rises or falls. If you were traveling some place and wanted to get a real sense of the atmosphere, I could think of much more worse ways than chilling outside for a half-day while busying yourself with the mechanical task of laying out an insane number of fabrics.

Mack tracks textiles from manufacture to market to Maersk shipping containers, whirring the film into repeated giddy flights of momentum. Watching a 16mm print with a crowd was, as always, a treat, because her sense of timing is so spot-on that her edits make audiences laugh in the same place, responding to wrongfooting rhythms or exhilaration at the sheer speed rather than any gag per se. The film eventually purposefully winds itself down, limiting the soundtrack to a machine somewhere stamping out product; the images of textiles, alternated with maps and pages from some textbook on languages, with an emphasis on the dead and endangered, make the case for Mack’s medium of choice as rich palimpsests of history, some now lost. That sounds heavy but it’s not—see this very fun hour-long refresher on a print if you can.